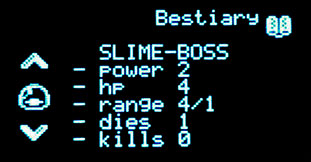 Is it normal that after beating a Slime with a crown (the boss i guess), i take the stairs and it just goes back to the title screen and i am back to being a ghost?

Yes, it is normal.
I limited the game to the first boss, because I have not yet updated the rest of the level after updating the sprites. I’ll do it in the near future. Game progress (the initial life, bestiary and so on) will not be lost.

but like i said, the second mob i encountered was able to kill me In 1 or 2 shots.

Initially, the swordsman is given 3 spheres of life (which corresponds to 6 points HP, if we consider that the spheres are empty and then cleaned up later).
In accordance with the bestiary, the first mobs deal damage BAT-1HP, VIPER-1HP. So, in order for the swordsman to die, he must receive 6 strokes.

Any update on this project?

Bumping this thread, because i want to play this game.

Few post up there’s a link to the repo

There’s something new added more environment sprites added animated sprites of walls and floor added satellite (it will further show how much the character is close to the final boss, probably …) added visual effects of strokes, appearances of steps, death, transitions to the next floor monsters after death will leave a puddle of blood In the plans add wiki to killed monsters, weapons (symbol table and text output procedure already added) update the level (taking into account the newly adde…

Hmm, maybe I was not using the latest download when I played last. I couldn’t do anything in game. I’ll try again. Thx

From what I remember, the last version I played let you get to the first boss.