the cost of the displays has increased significantly

There is a shortage of displays right now, I was lucky to get in just before it got really bad. And also very lucky the quantity was so high, because it ended up being the minimum order quantity for the only place that could get them any faster than 6 months!

This is part of the reason the kickstarter units are behind schedule, we should get all of them delivered to us by the end of the year.

I’m looking into ways to sell the parts on the store here, but it only makes sense to me if I can sell them cheaper than they are available elsewhere. I’m looking at ways of selling the battery separate but that is a project for another day.

Don’t forget the original board files are out there too!

I just wanted to jump in here and say I love to see all this work here, it’s so cool to see everyone helping each other out. These kind of forum posts are exactly how I got started. Keep it up everyone!

I’ve recently ordered my Arduboy from the webstore and I think I’m gonna get it in my hands soon enough. But since I always love cool projects, for as simple as they may be, I bought everything necessary to build my own homemade Arduboy, or “Hackduboy” as some have said.

I know a bit about electronics and programming, but have never messed with any Arduino related thing.

I want it to be as compatible as the production Arduboy, but I’m not so sure of how to connect everything, and I’m afraid I can damage something if I do it wrong.

Can someone help me, please?

To be fully compatible you would also need a common anode RGB LED and three suitable dropping resistors for it.

Wiring for an Arduboy compatible using an Arduino Leonardo and Adafruit 938 (or 326) OLED display:

Some of the display pins need to be connected to the Leonardo’s ICSP header, which is the 3x2 pin connector on the edge opposite from the power and USB connectors. 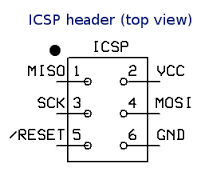 Either speaker lead can go to either pin. If the volume is too high, you can put a resistor between one of the speaker leads and the Leonardo pin.

The common anode of the RGB LED goes to 5V.
The cathode of each individual RGB LED should connect to its own appropriate dropping resistor. The other lead of the resistor should go to:

For the RGB LED that I used, similar to this one, I found the following resistor values to work well with regulated 5V power: Red 1K, Green 3.3K, Blue 1K

Thank you very very much, man! It all works perfectly well!

Now that I’ve tested it using a breadboard, I’m gonna make a box or something of the kind for handling it better.

ArduBoy uses 16 pins? I made a clone of an ArduBoy and it is using 12 pins.

Tricks with the display: Tie CS low and use an RC circuit for reset to eliminate 2 pins.
This still means 14 pins.

If you want to remove some functionality: Use only 1 pin for the speaker. Eliminate the RGB LED.

, so I decided to take a crack at putting one of these together. The parts box provided everything but sufficient switches, so tried one of these instead. It worked well enough to verify functionality, but the buttons were problematical at best, the LEDs had the wrong common pin, and the entire thing was a bit flakey. Since I Need more switches anyway, I’ve placed an order for those. Thanks to those who contribute the writeup.

I’d really rather use a Uno than a Leonardo, but the code doesn’t compile and I think it’ sufficiently unlikely that the leonardo version will work to bother trying it. Please let me know if that’s wrong. The Arduboy2 library doesn’t seem to be any better off. At one point Scott had a branch of the Arduboy library for the atmega328p, but the examples in that don’t build for me.

So, is the idea of moving from the Leonardo to a Uno dead? My next choice would be a pro mini (I buy those in six-packs), but that’s still got a 328 and not a 32u4, so probably no better.

The Arduboy2 library doesn’t seem to be any better off.

I haven’t done any work whatsoever to make Arduboy2 328p compatible. Even the work I did on the original Arduboy library was incomplete.

An Arduboy equivalent based on a 328 instead of a 32u4 is always going to be problematic. There are too many hardware differences between the chips.

You can get close with the 32u4 based SparkFun Pro Micro but either a Leonardo or an Arduino Micro are the best for 100% compatibility with all sketches.

An Arduboy equivalent based on a 328 instead of a 32u4 is always going to be problematic. There are too many hardware differences between the chips.

Yeah and I think overall the library (and others also) is moving the opposite direction of that also. We’re moving to smaller code size and very optimized for real Arduboy hardware (timers, ports, etc). Someone who wants the best experience really needs to use the same components - which as mlxxxp said is the 32u4 when it comes to CPU.

Someone who wants the best experience really needs to use the same components - which as mlxxxp said is the 32u4 when it comes to CPU.

For me, this isn’t about “best experience”, but about “easier development”. I’ve got one 32u4 based Arduino, and something like a dozen 328p based ones in my parts box.

What I’m thinking about now is turning a proto shield into an “Arduboy shield”. Just solder the LCD, buttons and speaker on the thing, and then plug it into whatever fits my project best. The Leonardo for current Arduboy code, but it could go on a Mega or a Zero for a SAMBoy, or a Nuecleo board or even the STM32F469 Discovery if there’s ever an STMBoy. Anyone else interested in such a project?

Do you mean a project to create a standard “Arduboy” shield? It might be difficult because it’s best to assign pins based on the capabilities of the particular processor. E.g. PWM pins for the RGB LED or a DAC output for the speaker.

Clearly, it wouldn’t be “standard”, since there’s not really a standard. The devkit used different pins, and a number of systems similar to the one proposed here used different pins as well. Making it use the same pins as the current production Arduboy is more a matter of “why not” than “why”.

This would be in the same space as all those other DIY systems. The only real difference is being on a shield would make it easier to experiment with other processors than being on a breadboard or a custom PCB.

The only real difference is being on a shield would make it easier to experiment with other processors than being on a breadboard or a custom PCB.

Sure. If you just brought out all the peripheral signals to pads, that could then be jumpered to pads on all the pins (either by soldering or by some kind of plug/socket system), and made it both 5V and 3.3V compatible, it could be useful.

Sure. If you just brought out all the peripheral signals to pads, that could then be jumpered to pads on all the pins (either by soldering or by some kind of plug/socket system), and made it both 5V and 3.3V compatible, it could be useful.

Do the pads really have an advantage over just plugging stuff into a proto shield or a bread board stuck to one (what I’m doing now)? I’ve found such things to be a bit fragile, which is why I’m looking at hardwiring things to a proto board. Sure, using header pins or some such would make it easy to use binaries from some hypothetical 2nd gen system, but what are the chances that it’s going to use the same peripheral set with a different CPU?

Do the pads really have an advantage over just plugging stuff into a proto shield or a bread board stuck to one (what I’m doing now)?

The only advantage I see to a shield with pads is that you could hardwire all the power and ground connections, but all the signals will still have to be manually connected, so not a big advantage over a solderless breadboard, like I use.

but what are the chances that it’s going to use the same peripheral set with a different CPU?

Not much. That’s why porting the libraries to another processor architecture can take some effort. But the goal is that the library’s API abstracts the hardware well enough that sketches will recompile with little or no change, as long as the sketches use just the API and don’t directly access the hardware or contain assembler code.

Most of the inexpensive 1.3" ones use the SH1106 controller, which would require some modifications to the library.

I have a Pro Micro sitting around and one of these SH1106 oleds incoming, would like to build one of my own Arduboy compatible

@MLXXXp or any other kind soul, could you please guide me on how to make the SH1106 modifications to the library?

please guide me on how to make the SH1106 modifications to the library?

I haven’t looked closely into how to do this, since I don’t have a SH1106 based display to test with. This topic has some discussion about it:

For the record, if anybody wants to use a Sh1106 screen often found on 1.3" breakout boards instead of a SSD1306 often found on 0.96" breakouts, here is the small modification needed to make it work: 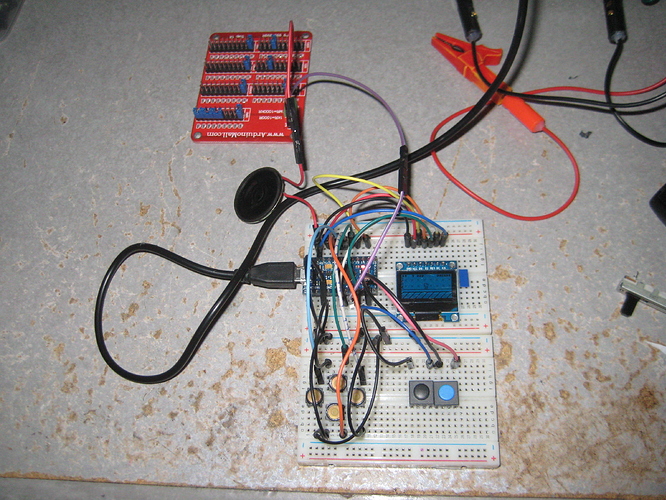 One thing I’ve found with many OLED displays sold on ebay is that they claim to be 5V compatible but really are not. They have an on board 3.3V regulator but the signal lines just use resistors to protect them, which is not safe.

What would happen if a non-5V tolerant OLED display is used with the 5V Micro or Pro-Micro? Graphical glitches? Or something worse?