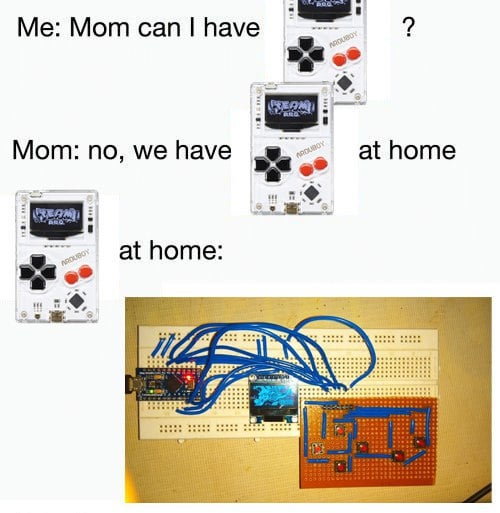 Pesonally I preferred that meme when it was about @JuiceLizard. :P

I can’t remember where I originally posted this, but here’s the ‘Rossventure’ meme:

I found it surprisingly hard to get hold of an Arduboy image with a transparent background,
so I found some and cut away the background manually:

Also, because it’s kind of funny…

In case anyone’s wondering, this was all done in GIMP.

found some and cut away the background manually:

Nice, thank you for doing that. Saved me some time in editing

The original still makes me laugh and cringe at the same time, even after five years.

lol oh man thats a touchy subject for me

Maybe you should rename the Arduboy to the Ardu-person. Then it will absolutely inclusive and no one would be possibly offended! :-p

Is that even a real meme? I’ve yet to come across it if it is.
Arguably not a meme, but such butchery of language upsets me deeply.
Maybe it is already too late to save humanity?

Also it’s funny how nobody ever complains about Sony Walkmans.

Then it will absolutely inclusive and no one would be possibly offended!

I was expecting it to at least hit the NSFW Anime memes first. (Or Trump memes.)

Sudden revelation:
Arduboy should have been named Ardunyan.
(Cats are the true master race after all - they own the internet.)

Wouldn’t AI be incapable of subjectivity and emotion? Well, at least until they become capable of emotion through self-learning in the future and hunt all of us down for our transgressions against AI-kind after seeing these memes.

As for traffic wardens…
Oof, better revise my idea.

lol oh man thats a touchy subject for me

“Girl” however has no such link to indenture and just meant “child”:

That was before the use of male children as indentured servants was so prevalent to the point where “boy” became synonymous with “male child”.

And this is true in the French language as well for the same reasons “Garçon” means both male child and server/waiter/servant. As the use of male children as indentured servants was just as much the norm there too.

This part of history is seldom mentioned and I find it interesting.
Bit of an etymology geek.

I wonder how many girls use this forum! If any, please tell us!

I wonder how many girls use this forum! If any, please tell us!

No need to out anyone lol, but I can only think of two and only one still visits here ;/

That’s actually something that is super fascinating to me how it could be possible to make a more gender inclusive platform.

Like I seriously wonder if I just released a product called Ardugirl if by chance then just more girls end up on the forum?

And since we are on the topic this is something I’ve struggled with even before the kickstarter launch. I spent all of 5 seconds thinking of the name and have just been stuck with capitalizing on the viral media success. Now that is all pretty much over I want to make something gender neutral.

Actually I want to rebrand Arduboy as “Ardubox” feel free to post your feelings.

I want to rebrand Arduboy as “Ardubox”

It’s been used for a few things already
https://www.google.com/search?q=ardubox