Currently im trying to figure out if it should be 2 AA, 3 AA, or 4 AA batteries since I want it to last a long time like the Fat original Gameboy If you know How many hours of use each uses let me know

I do not. This would depend on so many factors even aside from games (percentage of pixels illuminated in OLEDs / frame rate / clock speed ) because you plan to implement an LCD and haven’t given us any thoughts on your voltage regulation. You can start building an energy/current budget from the ATMEGA32U4 datasheet and your display will be another significant driver. If you are less concerned about the mass, 4 AA in 2S2P config could be stepped-up to 3.3V quite nicely (I’m using 2S1P in mine) or just stick with 3AA in series with a 3.3V LDO if you prefer it simpler. Don’t forget to check the LCD you want will run at the regulated voltage you choose and bear in mind that 3x 1V minus the LDO voltage drop at the end of the cell charge might not power your display (or microcontroller at the clock speed you want it). The original Arduboy uses a lithium battery and I don’t know what it’s cut-off voltage or regulation scheme is but it does run at max clock below the min voltage stated/recommended in the ATMEGA datasheet. Your design is all new territory in that sense (unless there are predecessor homemades I’ve missed - which is likely) and you’ll want to think about the range of voltages your microcontroller will see. 4S1P regulated to 3.6V or 4V or 5V may be a way to go.

The figures for the Game Boy probably aren’t generalisable to what you’d be making.
The components will be wildly different compared to what the original Game Boy had.

The technoogies involved are quite different (advances in power saving technology and the like, LCD vs OLED), hence I’m not sure how well the power consumption of a Game Boy compares to that of an Arduboy.

You’re probably better off (as @SimonMerrett suggested) just looking at the parts you’ll need and basing your estimates on those.

yes any images of it?

What is it that you like to see/learn from those images?

Hint: Look at the perfboard or look at the width of the flashcart PCB

Probably should use 3 AA

That’s a good choice. with 4.5V or 3.6V (rechargables) you don’t need a DC-DC converter which simplifies things. With the same hardware as Arduboy you’d get roughly 40-60 hours play time (with good rechargables)

Keep in mind that LCD screens have slow refresh rates. When I ran Virus LQP 73 on a ST7565 bullets were invisible and scrolling was blurry. using frameskips made things a bit better.
I’ve also got a LCP-2110015A LCD display from Sharp (will be used on PlayDate) that should have better performance. But I’ve yet to test it.

Another important thing about the choosing the display is, are you willing/able to modify the libraries to support your custom display and recompile each game. If you’d like to play games without recompiling them then your limitted to a SSD1306 OLED display or SSD1309 display (using patcher) 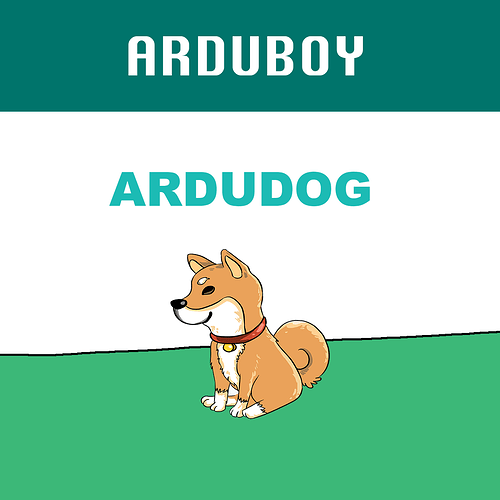 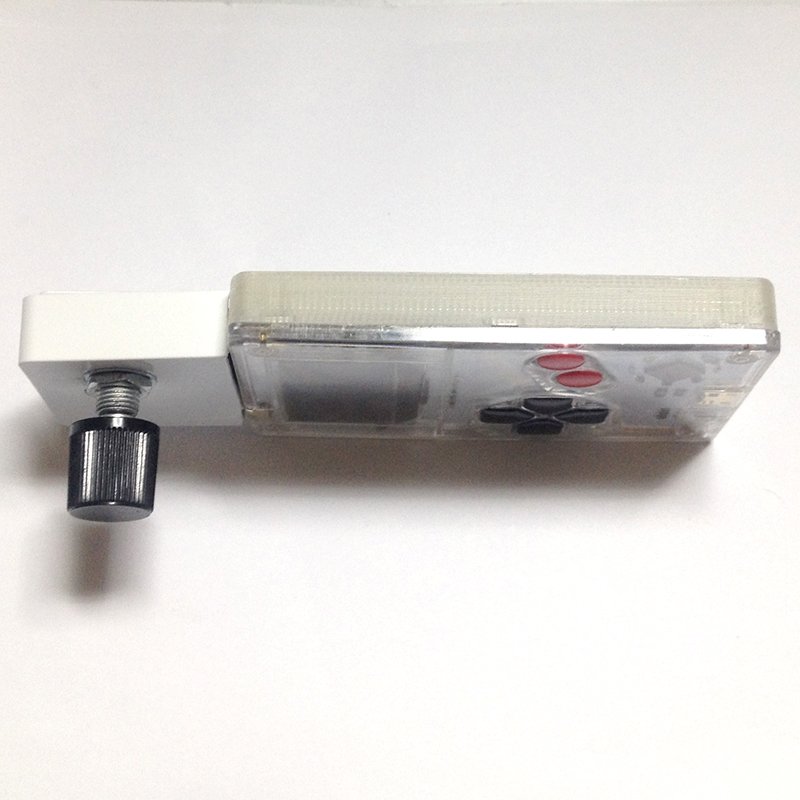 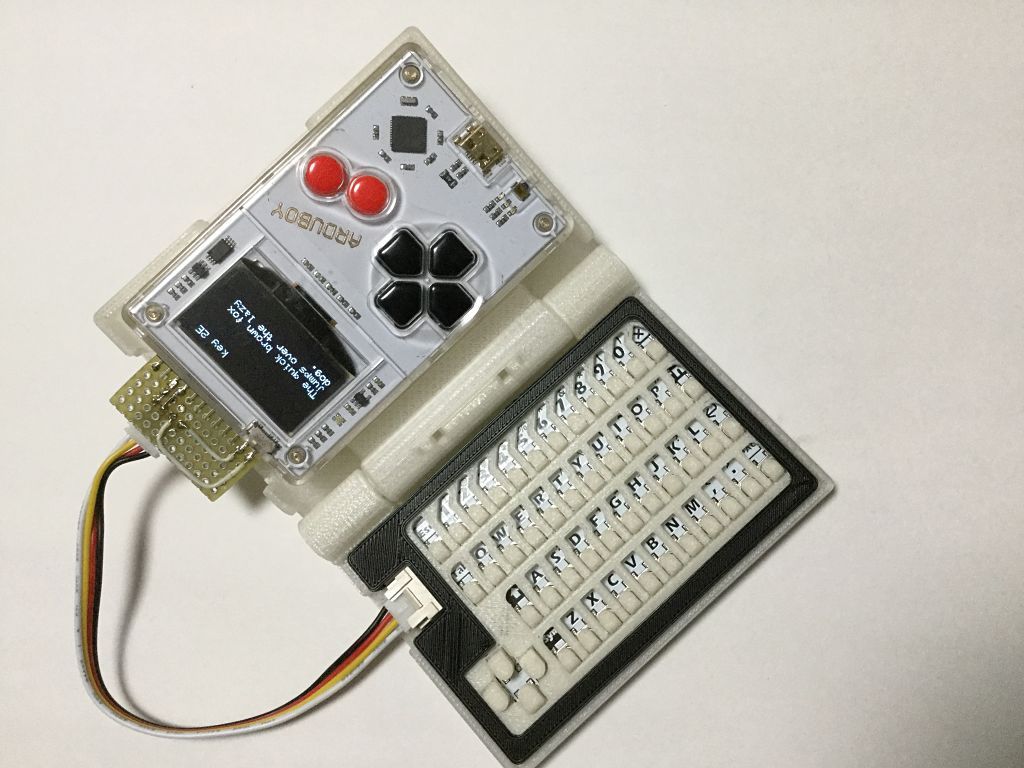 After seeing some of these carts I was wondering if it was possible to implement other Arduboy mods into the carts for serrate to use like the crank mod for a fishing game, a paddle for games like pong and breakout, a dual controller for multiplayer games without having to minimize controls

hopefully that’s possible to do

If you’re talking about the expansion connector described in @Mr.Blinky’s homemade package, then cartridges could be built containing any kind of devices that the ATmega32U4 can control using the pins that are brought out. This would include serial, SPI, I²C, direct digital control as general purpose I/O, and PWM analogue output on some pins.

I don’t think any of the pins are ADC capable, so for paddles or other analogue inputs, you may need an external I²C or SPI ADC converter.

EDIT: One thing to note is that the Arduboy runs at raw battery voltage, between about 3.0V and 4.2V. This is something to consider for the power and signal levels when interfacing external devices.

Does anyone know of a good LCD screen to use?

If you want an Arduboy clone, then there isn’t a good LCD to use.

I don’t think any of the pins are ADC capable, so for paddles or other analogue inputs, you may need an external I²C or SPI ADC converter.

At my suggestion, @Mr.Blinky has defined the previously unused pin 8 as Arduino Pin A5. This allows one ADC input.

Unless you can find a 128 x 64 pixel LCD that has a controller that’s compatible with the SSD1306 (and I don’t know of any), then there isn’t an LCD replacement for the OLED.

I don’t know why and this has nothing to do with the 90s Arduboy (Currently making the 3D print) But I have a game Idea of you raiding the store for Toilet Paper, stealing other peoples, and exiting the Store with all the Toilet Paper. Such Beauty

Does anyone know of a good LCD screen to use?

Refresh rate isn’t going to be great, but you can use a ST7565 LCD (there is support for it in @Mr.Blinky’s homemade boards package), like I did here:

Following on from my experiments here with using colour screens in ‘mono-mode’, I found a nice little 1.8" 128x64 LCD with an RGB Backlight!

Turns out that the ST7565 controller being used has almost exactly the same command set and page addressing as a SH1106! (setup / initialisation command sequence is completely different though). Anyway, problem is that these are just the LCD - no controller board attached, no voltage regulation / conversion, no nice friendly header pins… so I …