They blaitently show Castle Boy in the advertising video 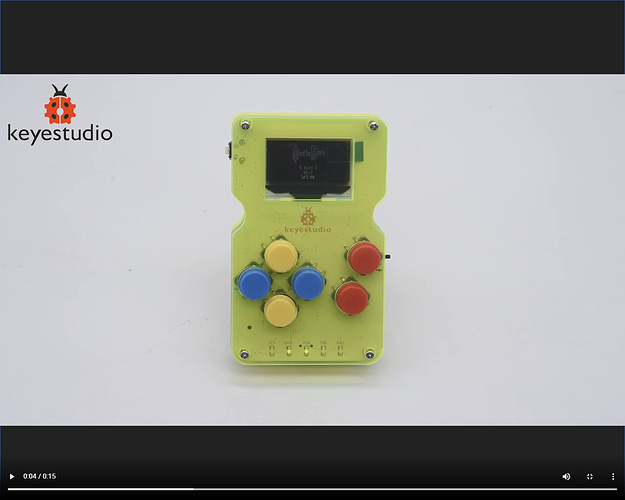 This topic will probably be deleted or hidden by @bateske but I’d like to say that if it runs at 16Mhz then powering it at only 3V is a bit low. Even the minimum 3.2V that the Arduboy runs at is below spec.

The PCB seems to have a pretty large coil on it, so wondering if perhaps it has a boost regulator built in to compensate for the wonky battery voltage maybe… No idea though.

perhaps it has a boost regulator built in to compensate

You could be right. I didn’t look that closely.

If someone doesn’t want their binaries on it they could do a “copy check” with the LED with a simple “Which color is the LED?” check

That’d leave out colorblind people tho.

They blaitently show Castle Boy in the advertising video

If the game’s licences doesn’t restrict redistribution then too bad, they can use the game on their clone.

they could do a “copy check” with the LED with a simple “Which color is the LED?” check

But note that there’s the problem with about 2000 Kickstarter Arduboy’s that have the RGB LED installed incorrectly. I guess instead of “What colour is the LED?” you could have “What pattern is the LED blinking?”

This kind of test would also affect people who build their own homemade “clone” but choose not to include an RGB LED.

Although it has no apparent RGB LED, it does have two LEDs that each look like single colour ones, at the bottom left, marked “KEY” and “GAME”. I wonder what they do?

Lol this is so awesome. Is anyone going to buy one?

Somebody buy one and do a review!

Great now I need to go to China find this company and convince them to make official ones.

Why not the RG-350 developers?

Keystudio make some nice Arduino compatibles I like the black and yellow theme their gear has, I got their UNO and some kits last Xmas.

Contact Aurelien from Gamebuino comp. i think he need some help to make his compagny more active. Maybe creating Arduboy could help him. (It’s only my opinion but for sure, China will be cheaper…). I reapeat but your consoles are fine and complementary, you could do so many things together as developping kits as you both are wanting to to schools and could make learning more fun for students before the China take the market

(It’s a little out of the subject, it’s just an answer because of the Joke of Kevin …

For only £10 I went ahead and placed an order. I’ll post some photos when (if) it ever arrives.

This is awesome but why they dont expose more pins… such a lame clone.

Toxic Green color FTW
I also ordered one. They didn’t cheap out on parts. There’s a DC-DC converter and LDO, two fuses (one for battery and one for USB presumably) and a small pot to adjust the volume.

There’s no RGB LED but they added a ‘key’ and ‘game’ LED whatever that means.

The buttons are probably horribly clicky. But it’s an interesting clone.

I think i’ll do tonight

Looks like you can find them on Ebay as well if that helps, just search for ‘keyestudio game’.

They didn’t cheap out on parts

If they run the microcontroller at the specified 5V for 16Mhz operation, I wonder if they have proper level converters and run the display at the max 3.3V?

They’re using the TQFP package for the ATmega32U4, instead of the QFN package on a real Arduboy, making it easier to solder to the pins for hacking.

If they run the microcontroller at the specified 5V for 16Mhz operation, I wonder if they have proper level converters and run the display at the max 3.3V?

Because of the voltage regulator added I think it’s running at 3.3V but if it runs on 5V they probably do the same as the cheap display modules (no proper level converters) I will find out soon.

They’re using the TQFP package for the ATmega32U4, instead of the QFN package on a real Arduboy, making it easier to solder to the pins for hacking.

Yes. Easier to break out pins for a flash cart

I share that same concern. But since they’re using a loose display panel instead of those modules there may be a small chance it’s an SSD1306 display. Regardless of that I think It’s a nice non soldering Arduboy clone kit for $16

Because of the price it’s gotta be the SH?

Yeah it’s a cool kit. I can’t find any contact info for them.

I guess I’ll have to try buying it and then send an email.