Hi everyone I’ve been working on an idea and I was wondering to further my work can you write to specific ports
Example:
If port 1 presses a button then port 2 displays hello
//so basically using the computer as a hub

In the future would this be possible 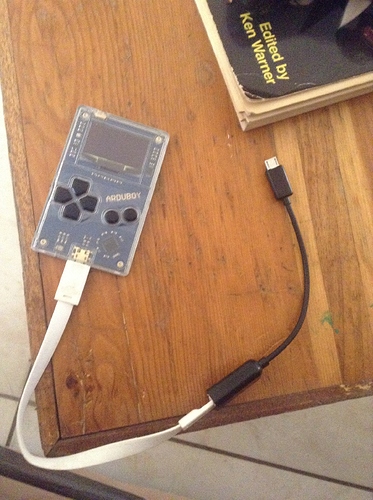 I made below. Is it ok?: Multi-Player linked Arduboys via a Raspberry pi USB host Here is a code:

In the future would this be possible

I think the answer to that is probably “No because in USB one end has to be the ‘master’ and the other has to be the ‘slave’”, but I can’t remember where I heard someone saying that.

I’ve never tried it because I’ve never had two arduboys to hand at once, but I believe that’s how it would work.

If one COM port is in use a different COM port would automatically be allocated to another device that’s plugged in, but I don’t know if there’s any logic to the numbering scheme.

It would be possible to use a Pi as the host too. The Pi uses a variant of Linux though so it would be different to how a non-Linux computer would behave.
I don’t know if that code would work on a regular Linux computer or not, Linux isn’t really my domain.

I have a xubuntu! Would that work?

I have no idea, ask @koteitan, or someone more used to Linux.

I think the answer to that is probably “No because in USB one end has to be the ‘master’ and the other has to be the ‘slave’”, but I can’t remember where I heard someone saying that.

This is correct, though “host” is the correct terminology. It also requires an On-The-Go (OTG) USB port.

I think xubuntu work well with my code if the xubuntu supports termios.h.
see http://www.tldp.org/HOWTO/Serial-Programming-HOWTO/ .
Did you get the two arduboys now?

So if you want this capability on the next gen Arduboy, push to get the Native port exposed!

Ummmm. Ones a diy in the making the others a really new one from last year. It comes up as a arduboy2 specs wise