What i’m having trouble with is that programs like miditools seems to help with music generation workflow, such as working with a MIDI app to generate a .mid file, then convert to the necessary unsigned char data.

Have you considered such an approach w/ ArduboyTones?

Already done (as long as you’re comfortable with using a command line program).

I’ve enhanced the MIDITONES program to allow converting a MIDI SMF file to AruduboyTones format, in addition to its original purpose of converting to the Playtune format (used in the current Arduboy library). I just haven’t announced it yet (so I guess this can be considered the announcement

Len Shustek, the author of MIDITONES, didn’t wish to include my enhancements in his program but is fine with me creating a fork. My program is called midi2tones and can be found here:

The Arduboy2 library is also now installable via the Library Manager in the same way.

That’s bad ass dude. I had not realized that you forked Miditones

Thanks a ton, Scott!

It just hit me that Tones & Tunes are not compatible.

My hopes was that tones() would allow me to 1) play tunes in the background, 2) play up to 3 tones in sequence to create sound effects (something that Tunes can’t do).

My hopes was that tones() would allow me to 1) play tunes in the background, 2) play up to 3 tones in sequence to create sound effects (something that Tunes can’t do).

ArduboyTones is a bit more limited than ArduboyPlaytune with respect to playing background music and sound effects at the same time. However:

I wrote ArduboyTones to be very small, simple and efficient. It wasn’t really intended to allow both background music and effects at the same time. I figured ArduboyPlaytune served that purpose, at the expense of larger code size and causing problems with the RGB LED.

For ArduobyTones compatible output you use the -o2 command line option.

This is the monster we’re working on.

Dear all,
Sorry to be a pain, I am trying to understand why most piezo sounders have a signal wire for PWM and a ground and the Arduboy has two signal wires with 2 x PWM in sync (I had a look at the signal on a scope today). How does this work? I know from the forums you created some clever code to raise the volume. Please advise.

I am a teacher and have been asked by a student!

The piezo element has 2 electrodes, on the front and the back. Only one side is electrically connected with the wire. I had no idea what I was doing when I designed this circuit but the concept was to drive both sides of the piezo means twice as loud. It is louder, but not really.

If you are looking for better sound from your Arduboy, really the best thing I think is to bring out the wires and just hook it up to something else.

That article not very relevant to the question. A real Arduboy does have a non-typical piezo speaker, with two ceramic elements; one on each side of the flexible metal disc. A standard piezo transducer has only a single element on one side of the metal disc. When driven properly, a dual element disc can produce more volume for the same size as a single element but the way the Arduboy is wired it only makes use of one of the elements (so a single sided disc could have been used, and is for most homemade designs).

I think this post of mine better explains the use of two pins:

In the Arduboy, one pin is connected to one of the speaker leads. The second pin is connected to the other speaker lead, rather than grounding this speaker lead. Since each pin can sink as well as source current, you can leave one pin low (or high) and it will provide a return path for a signal generated on the other pin. (Therefore, note that in order to hear sound generated from one pin, the other pin must be set as an output.) As a side note: The piezo speaker used is essentially a capacit…

Thanks guys, this information is very useful in understanding the operation of the circuit, thank you kindly for the explanation, I’ll forward it on to the students.

Hi sorry to bother you. I took a scope reading during playing Picovaders and got channel 1 and 2 trace one each pin of the piezo buzzer. See picture. I wonder if I made a mistake as I would have expected so see one of the signals inverted? Any idea? 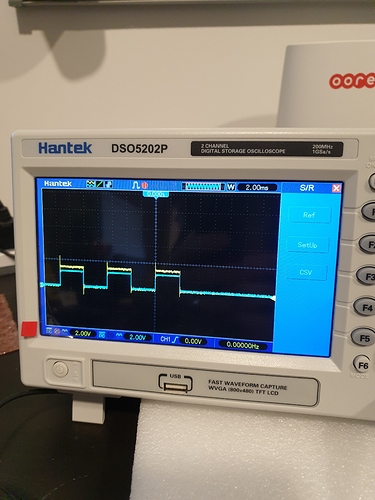 I wonder if I made a mistake as I would have expected so see one of the signals inverted?

Note that there is a 220 ohm resistor between the signal coming from Arduino Pin 5 (ATmega32U4 pin 31) and the buzzer lead that it drives. (It’s shown as capacitor C12 in the schematic but it’s populated with a resistor.) Therefore, if you’re scoping that buzzer lead itself, you are probably seeing an attenuated version of the other buzzer lead.

With Picovaders, Pin 5 is held at low and only Pin 13 is driven with an audio signal.

To look at the Pin 5 output, you can put your probe on the microprocessor side of the resistor, as circled in green in this photo: 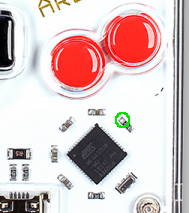 Thanks Scott, that makes sense. I will have a go and get back to you! Thank you very much for your time. Greatly appreciated.

Would you please provide a simple, complete example? Is it possible to query the arduboy.audio parameter to find out what audio the arduboy is currently playing?

Do you mean an example of using the ArduboyTones library?

Is it possible to query the arduboy.audio parameter to find out what audio the arduboy is currently playing?

No. The Arduboy2 audio functions are only to provide control of muting or unmuting sound.

You can use the ArduboyTones playing() function to determine if something is currently playing but not what tone is playing or for how long.

Your example doesn’t play any audio on my DIY arduboy where the speaker is on Pro Micro pin D5.

doesn’t play any audio on my DIY arduboy where the speaker is on Pro Micro pin D5.

It should, as long as the other side of the speaker is connected to ground (or the proper pin 13, which isn’t available on a Pro Micro).

Does sound work for any other sketches? If not, maybe sound is muted. To unmute, Hold B while powering up and press UP while still holding B, then release both. (Pressing DOWN instead of UP will mute.)

I optimized the ArduboyTones library interrupt service routine by ~52 bytes

Since my version of the library also has additional changes for the Homemade package I just give a link to the changes here:

I shall update the FX version too!