Code won’t be available for a while. It will eventually be open sourced but no specific date has been set. Sometime after it’s been shipped out but other than that ???

No one passed out here… but one of my favourite photos taken at the factory!
All these were senior level engineers who had to work the production line to complete the Arduboys before a Chinese New Year holiday shut down. You can see the surrounding factory floor is quite empty already.
This was them trying to find the most efficient way to put the buttons and case together. 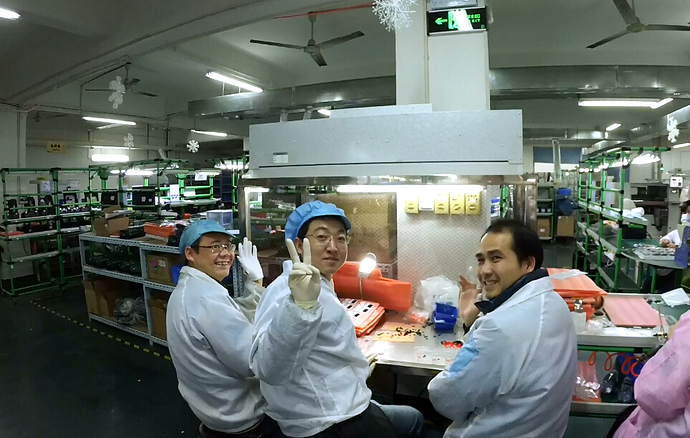 that can only mean they found a more efficient way

Hope to read/see more of the production Adventure.

Seeed Studio are qualified professionals. Sobriety is more of an obstacle to them than anything. The real question is, are they both for him? If not, who’s the poor sap that isn’t in on the deal?

photos taken at the factory!

This should probably be in the kickstarter thread

The most anticipated game for the Arduboy is Live on Kickstarter now! Proceeds of the campaign go to support TEAM a.r.g. Arduventure is a classic top-down 8-Bit RPG with original monochrome graphics and musical score. Collect items, weapons, armor, amulets and magic to fight enemies in turn-based battle system. Explore a massive world map larger than the one in Zelda: Links Awakening! The Arduventure thread is the most visited and most commented in our community forums and we wanted to cele…

Is this a good place to talk about the game play itself? I have gotten the “Victory” amulet, but it’s unclear if that means I’ve won? I doubt it since I haven’t gotten any of the blade pieces yet, but it’s not at all clear what I’m supposed to do now. I’ve been wandering the map looking for clues.

Are you playing the old unfinished version or have you managed to get your copy early?

I got my special edition of the arduboy, and it was preloaded. I assume it’s the finished version.

IDK maybe making a new post for gameplay discussion with appropriate spoiler warnings would be best.

IDK maybe making a new post for gameplay discussion with appropriate spoiler warnings would be best.

I’d make the post myself, but then I’d be bombarded with notifications.

I wish i had those problems, didn’t even manage to get a kickstarter edition😢
Just bought my second arduboy, because i know i will play arduventure all day😆
And btw: Could someone make an unboxing video and some pics (i would at least see what i missed)

Oh boy now i am excited!

Awesome! Congrats on being one of the first to get it

The blade pieces are a little hidden and not required to defeat the game’s bosses. I don’t want to spoil anything else about the blade pieces

Where did you get your second one from? I have been looking on ebay for an extra one.

Where did you get your second one from?

Maybe from EXP tech? They have units back in stock. Besides Germany they also ship Europe / worldwide with fair shipping rates.

I also saw Digikey has units in stock.

Yes, Mr. Blinky is right, got it from exp.tech as i live in germany.

Also if you can catch when they come out on Massdrop they are cheaper with the exception of the long shipping times.