Yeah, that’s a known bug with the text buffer after opening the menu. Hopefully it will be fixed in the next update.

I’ve my Arduboy ready guys.
Pleaseeee I want to play this game so badly since the very first demo!!!
Btw, good job! 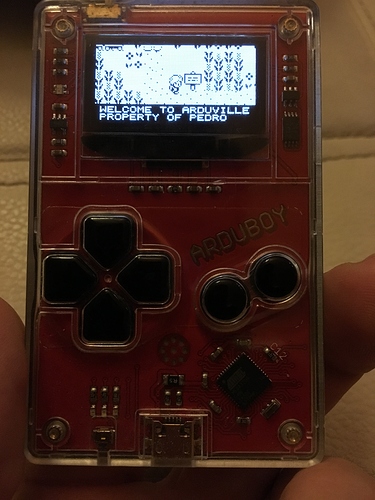 Back to my property after beating this great game! Happy to have backed this adventure on Kickstarter. Now waiting for the source code to see how you guys managed to squeeze so much in that little thing. I just had a couple of issues.

(+ the secret map, but you already know that issue).

Hi @PedroGent thank you for the feedback! I hadn’t heard of the battle effect not always playing, that should be fixed in time for the public release

Can you provide more information on the HP restore items not working during battle? Is it always happening? Does the inventory not open? Is it Apples and Ciders that aren’t working?

The battle effect dose not work after you run away from a battle. For me that is.

@random_king that is what I found as well, thank you! @PedroGent I’m having difficulties duplicating the healing items bug in battle. I’ll keep trying to figure out what could cause it.

Hello Arduventure fans! This thread is soon approaching capacity and will be closed soon!

Before commenting here consider if it could be a new thread or search around to see if one already exists.

Other than that, enjoy your time here while it lasts before these pages become forever archived!

Hi @Gaveno, I had the issue on every battles. I could open the inventory, select an item and confirm the selection and after that no HP we’re restored and an attack was launched. I will start a new game and see if it’s happening again (I can reproduce anymore as I don’t manage to lose HP anymore).

Is the demo available or the old arduventure? :P

You can still get at it, but it has the potential to brick your Arduboy,
so it’s probably better to not attempt to try it.

Were can I get it?

The demo might still be available somewhere but I took the Arduventure page on my website down as the demo could brick your system (as Pharap already said).

So is there a place I can get it? What about the old arduventure with the bird?

Are you prepared to fix your Arduboy yourself if it gets bricked?

I doubt you’d be able to send it in for repair if it gets bricked because you’ve been told “this will probably brick your Arduboy” and you’d be ignoring the warning.

The new version will be out in May sometime. i would wait. I experimented with the old version… and I would stay away from it.

Yeah I can fix it. Is there a old arduventure with a bird and a old battling system. (no magic)
Would ABE be able to run it.

Would ABE be able to run it.

Good point.
If you play it on ABE then you won’t brick anything.

You’ll have to compile it, there’s no hex.
And I’m not sure which of these three is which:

In case anyone else sees this:
Do not run these on your actual Arduboy, there’s a high probability that your Arduboy will be bricked and need its bootloader reburning.

What about ARDU_AB and What is the difference. could make a hex?

Hello and welcome to the end of the original Arduventure (RPG) thread.

This thread is now closed!

The game has been produced from the demo original posted here into a full fledged game that was released as part of a special edition kickstarter launch.

If you wish to make comments specific to kickstarter then probably it is best to use this thread.

The most anticipated game for the Arduboy is Live on Kickstarter now! Proceeds of the campaign go to support TEAM a.r.g. Arduventure is a classic top-down 8-Bit RPG with original monochrome graphics and musical score. Collect items, weapons, armor, amulets and magic to fight enemies in turn-based battle system. Explore a massive world map larger than the one in Zelda: Links Awakening! The Arduventure thread is the most visited and most commented in our community forums and we wanted to cele…

If you have a specific issue with trying to reprogram the Arduboy, or bugs you may have found, search around first and if you don’t see a similar problem go ahead and make a new thread.

For all other general comments, feedback, and discussion head over to the published game page of Arduventure.

ARDU_AB_v101 (1).arduboy This is our 12th game for Arduboy. You’ve all been waiting a very long time for this to be publicly released … So … here it is

Here you have the kickstarter video: [Arduventure on Arduboy: 8-bit RPG for your wallet] (we still need to do a bit of work on some of the pages though, but hey … at least you can play the game now. Also, we know about a lot of the bugs and already fixed most of them, but we wanted to release the original code first…

Thank you everyone for contributing to this conversation!