Emulating the 6502 CPU (which the Atari 2600 is based on) is well within the reach of the Arduboy, and has already been done many times over.

Just do a Google search for Arduino 6502 or AVR 6502 and you will be led down a fascinating rabbit-hole of several projects that could form the basis of an Atari 2600 emulator for the Arduboy.

And I do think there is some merit in taking the path of emulation vs. writing native games - if the effort of writing one emulator sketch means that a vast library of already existing games would become immediately playable!

(you would have to do some creative resizing to fit into

Err… you can emulate on an Arduino. I have emulators for the RCA Studio 2, Cosmac VIP and Elf 2 (all basically the same system) which emulate 1802 CPUs and generate 64 x 32 pixel PAL video at the same time. Other older processors like the SC/MP and 8008 are also doable at full speed. 4 bit ones aren’t a problem either.

As someone who has written a 2600 emulator (in x86 assembler) I can tell you it is difficult (it’s easier now, but I had a 386/20 to work on at the time which meant speed ruled and I had to come up with a wierd caching design) because everything has to be done to cycle level accuracy. Emulating the 6502 (an Uno cannot do a 6502 at full speed) is the easy bit. Emulating the TIA and RIOT is much harder. 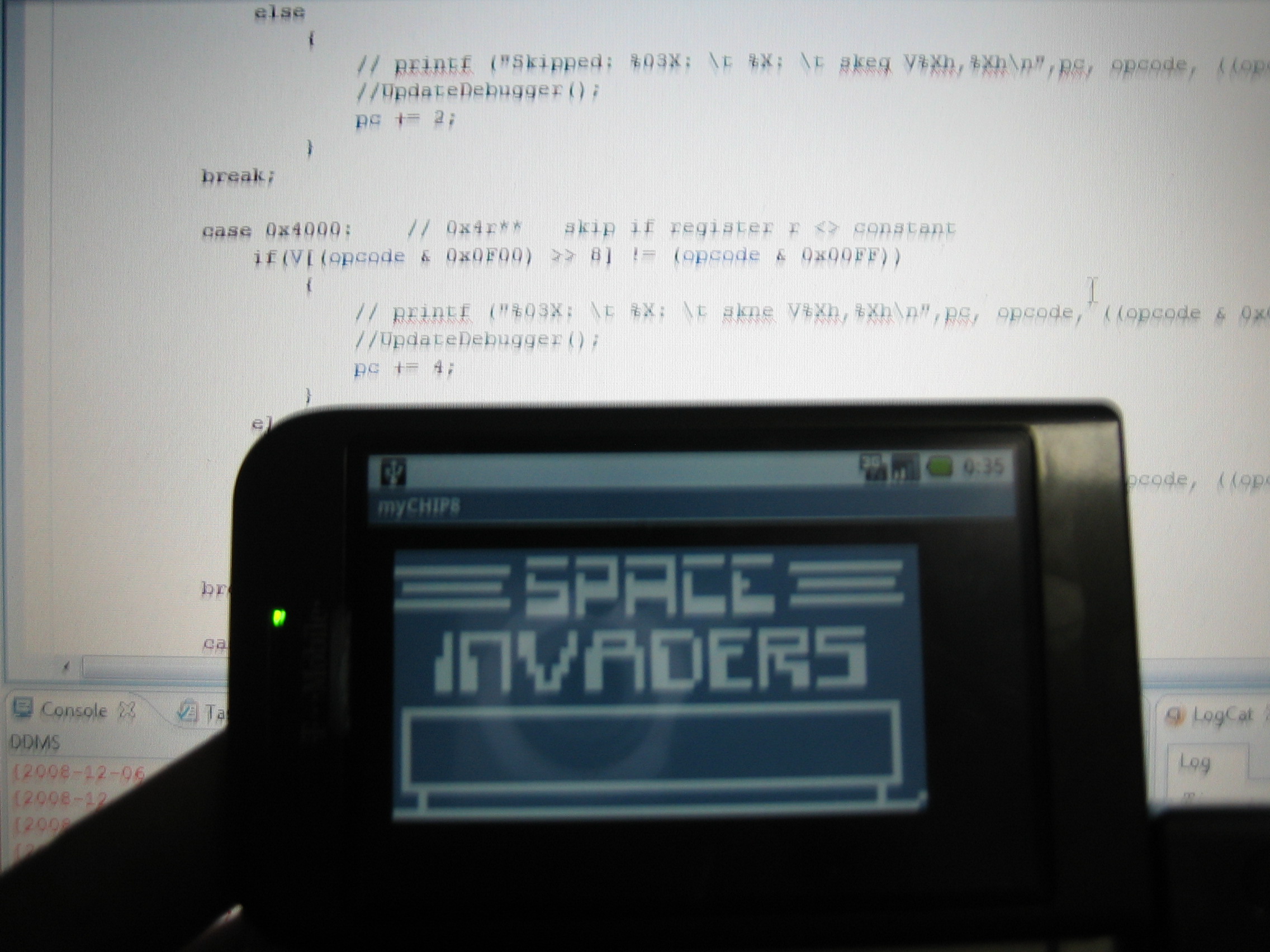 How to write an emulator (CHIP-8 interpreter) | Multigesture.net

This guide is intended to give a brief introduction to the world of emulation and will also teach you how to write one yourself from scratch. Personally I have been excited about emulators since the late 90's. As I didn't own a console back in the... 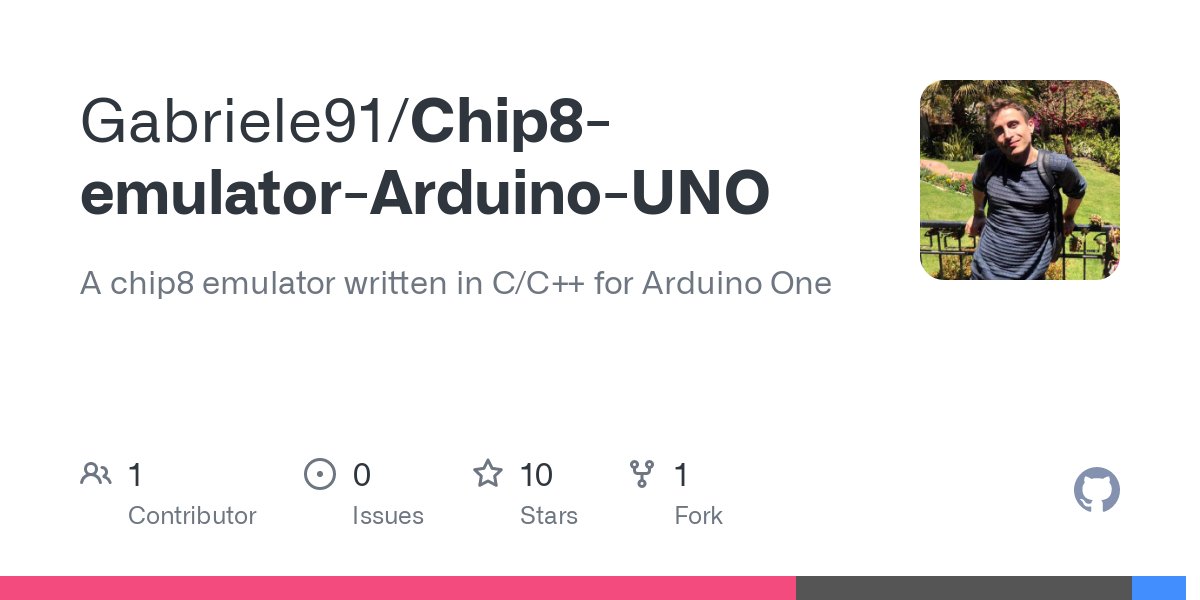 A chip8 emulator written in C/C++ for Arduino One. Contribute to Gabriele91/Chip8-emulator-Arduino-UNO development by creating an account on GitHub.

Always a great thing to put old platforms on to modern gaming devices. Super sharp oled gfx of street racer 2600 makes me feel warm to the idea. Hoping the idea of 2600 roms on a arduboy becomes a do-able reality. Put my name down for a purchase.

It’s really nice when you see Space Invaders on emulator how it looks, better than playing on original console back in the days. Lots of games are now better for playing. Asteroids, Frogger, Pac-Man the games that I remember playing them.

I don’t think we’ve got Frogger or Pac-man clones,
but there’s a whole selection of Asteroids clones:

Arcade_ASTEROIDS_ASTEROIDS.hex (69.3 KB) ASTEROIDS are LIVE! The final series of “long awaited backup” GUARANTEED: The first game ON THIS WEBSITE that is able to measure the battery status on the move. Download ASTEROID2.ino and get the ability to monitor the battery voltage! (in pause menu and high score display), in 1234mV (1.234V) format For the game to compile, you also need to download sprite.h (which is shared between ASTEROID.ino and ASTEROID2.ino.)

I started making asteroids for the ardu boy this weekend and someone told me I should enter it here! I was suprised when I found out about this game jam and I am also suprised that I fit the theme! I’ve leaned into the difficulty aspect of the game for this game jam. See if you can get over 100 points! I hope to continue developing my own flavour of asteroids for the ardu boy. I hope to add persistent storage of a high score, and possibly other stats! Check out the movement and shooting in …

I can’t believe there isn’t a Frogger game.

Back to the Jungle: Entry for the Jam Game Jam 1

Here is my entry for the Jam

The Zoo had to close, what can the animals do? It is a small arcade game, inspired slighty on frogger (but sideways). Screenshots: [image] [image] [image] Download: Use my Arduboy Uploader to install the game now (copy and open the url below): arduboy:https://raw.githubusercontent.com/eried/ArduboyCollection/master/Arcade%2FBack%20to%20the%20Jungle%2Fback2jungle.ino.leonardo.hex or download the hex file or compile the code if you prefer. Hex fi…

Not sure about the state of these:

[image] Description So this game started out its life as a Frogger clone, ended up being a Freeway clone. Instructions Objective is simple, help the chicken cross the road, score points. Audio can be toggled on/off at the title screen. Download Find the full source on Github. $ git clone https://github.com/dragula96/ChickenX

so I found out about arduboy less then a week ago I’m still waiting for the parts to build one so I thought id try programing for it well I wait. this is my first time programing anything really and the game was made in only two days https://drive.google.com/file/d/144AklOm3MHFm3o7qsZAqkzhtCR3ehUCQ/view?usp=sharing

There’s an ATtiny frogger that wouldn’t take much to run on Arduboy.

[arduFPGA iCE40UP5K arduino R3 format playing arduboy games] Exciting stuff! @Iulian - whose work became part of the Arduboy MiSTer core I worked on, has got a development board in the works… Uses the standard Arduino form-factor, but allows for loading games off SD card, and is running a virtual ATmega32U4 on an FPGA! So, all the benefits of compatibility - but with the potential to push past the limitations inherent to the microcontroller

maybe I will have enough resources inside the FPGA, at least it will be a nice thing to play, this way we can play games of all platforms on only one board, changing the games and designs at one click distance

At this moment the arduboy emulation is doing great

Haven’t seen 256x192 displays. the best to fit that resolution without scaling would be a 2" 320x240 display. IF skipping a pixel every 16 horizontal pixels is acceptable you could use one of those 1.3"240x240 IPS displays

IF skipping a pixel every 16 horizontal pixels

or just make some crop for 8 pixels from each side

I used one of those on a pi0 and just cropped the outside for systems like Nes, master system etc. As they were designed for CRT TVs, you probably wouldn’t have seen the borders much anyway.

8 pixels from each side

You could even use those spare pixels to make a very simple border.
A bit like what the Super Game Boy did.

Here's a quick close up of my thumbs! These particular thumbs are playing on a #raspberry pi zero with a 240x240 #pixel screen, running from a 400mah battery all stuffed into a #sega #dreamcast #vmu. https://t.co/WgXeBbKDeT

I think you will be pleased with the result. 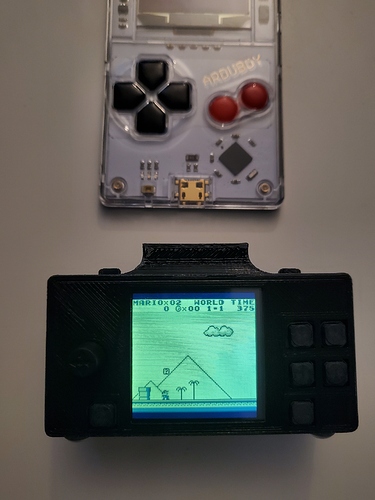