i don’t get the values they don’t seem to indicate pixels, but this is what i came up with
i%0x17>0x02?0x7F:0x00;
nothing special but looks like a brick wall

they don’t seem to indicate pixels

sBuffer is the frame buffer, but it’s 1 bit per pixel (so each byte is 8 pixels) and uses an unusual column-oriented format (i.e. each byte is a column of 8 pixels) because that’s what the SSD1306 screen uses. 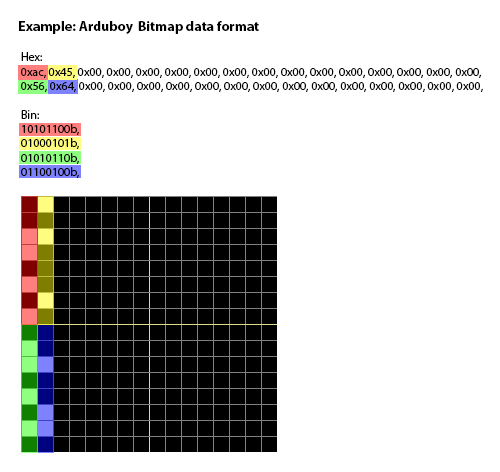 Not sure if it’s ‘cheating’…

It might not be ‘cheating’, but any pixel-filling function that doesn’t rely on previously written pixel values has the advantage of being able to skip the frame buffer and be written directly to the screen.

For example, since your initial example is effectively a pure function, you could do this:

Though it’s possible to use paint8Pixels even with non-pure (i.e. stateful) functions, as long as the state isn’t sBuffer:

(Note: both samples are completely untested.)

Great job. Do you have a name in mind for your creation?

@Pharap - Thanks. I was lazy and just waited for your handy screen buffer guide

Does Paint8Pixels add more bytes than direct sBuffer writing, after compilation?
PS- I was sure you’d have some awesome ‘magic’ to share here- was expecting Conway’s Game of Life in a single line!

The short answer: probably not because it allows you (or rather it requires you) to skip the call to display, which should theoretically reduce memory usage.

was expecting Conway’s Game of Life in a single line!

It would likely be possible to do CGoL using just the screen buffer plus an extra variable or two, though that would be much more fiddly than doing it double-buffered.

Whether it’s possible to do it in a single line depends on whether you could the for loop as part of the one line. It could probably be done with a single for loop with a single nested statement.

In the past I’ve wasted far too much time trying to decode impenetrably terse code written with single-letter variables and no explanation of how the ‘magic’ happens.

Nice challenge and submissions. Made a few simple ones using ProjectAbe online:

For anyone who cares how this works…

Essentially it’s a very obfuscated way of doing a branchless equivalent of:

I’m fascinated by the obscure (/obfuscated) style that emerges. It reminds me of those one-liner BASIC demos, printed in magazines in the 80’s-90’s to be re-typed - full of mystery and wonder! Or the more recent audio experiments of ByteBeat (which originated as a video demo too!).

Looks quite mysterious… But expanding it out a little should reveal what’s happening:

I’ve been enjoying trying to create expressions with the least characters (as well as looking at compiled bytes). For values that are less than 256, they may be written more concisely in decimal form (0–255), avoiding hexadecimal which adds a 2 character prefix (0x):

Thanks @Pharap for the explanation of @FManga’s voodoo… I kept getting lost!

Note: this depends on i being a 16-bit integer

Woooppps… well that typo is gonna have to stay!

Looks quite mysterious
…
avoiding hexadecimal which adds a 2 character prefix

These are insanely good!

It would be great if all entries included the spoilers showing the output!

Can you explain the one liner? I get there is data … and some code … within [ ] … but how does that all glue together?

I think you’re looking for getPixel and drawPixel.

Manipulating individual pixels will be slow though, because of the amount of behind-the-scenes bit manipulation involved.

Obfuscated is definitely the word I would use.

trying to create expressions with the least characters

I have mixed opinions about code golf…

It can be fun, it can be useful for exploring the rules of a language, and it can be interesting from an academic perspective, but sometimes just an excuse for ‘clever’ programmers to show off how ‘clever’ they are.

In general it’s not too damaging as long as people remember to keep their golfing habits away from their proper code.

For values that are less than 256, they may be written more concisely in decimal form (0–255), avoiding hexadecimal which adds a 2 character prefix (0x):

If you didn’t have the 0x prefix then hexadecimal would always be either shorter or equal to the decimal representation (in terms of length).

With the prefix you have to get up to around 13 decimal digits before hexadecimal becomes (consistently) more concise.

I kept getting lost!

That’s the entire point of obfuscation: to put up extra barriers that impede comprehension of the code’s behaviour.

Edit:
A good tip for understanding overly-complex expressions is to do what the compiler does (and what I did above): translate it into static single-assignment form (minus the Φ ‘phi’ instruction) by introducing one variable per sub-expression. Once you break it down into smaller steps and see which variables depend on which other variables, it often becomes a lot easier to work out what’s happening.

&loop is the address of the first byte of the loop function.

I.e. the whole snippet is basically using loop as a base address to access what I presume is the image data for the Arduboy logo.

I would also presume that the image data can move around in memory if the compiler settings change or potentially if a significant amount of other code/data is introduced, in which case the code would print a series of undecipherable pixel patterns. (The actual animation behaviour would remain the same though.)

This seems to be less about saving characters and more about intentionally obfuscating the code.

Can you explain the one liner? I get there is data … and some code … within [ ] … but how does that all glue together?

The first part is the same trick FManga used: encoding an array of bytes as a string literal rather than an array literal.* Note that there’s an implicit 0x00 on the end because of the null-terminator. (In hindsight it wouldn’t have done any harm to add an explicit \x00.)

In my case I’m using hexadecimal escape codes to make the actual values of the data obvious, so readers don’t have to consult an ASCII table or read octal to make sense of it.

(Does anyone actually read/use octal these days? Unless you’re doing chmod on Linux or programming a PDP-11 it’s generally not very useful.)

The [] is just the basic indexing operator, used to index the string literal.

The code within the string literal is just the single-expression version of the code at the bottom of the code block above the one-liner.

Is reformulated as the single expression:

It would be great if all entries included the spoilers showing the output!

By the way, @brow1067’s entry is actually a Sierpinsky triangle.

It probably shouldn’t compile at all, but Arduino uses -fpermissive which might as well have been called -fabomination.

This seems to be less about saving characters and more about intentionally obfuscating the code.

More about not having a better way to access the logo on ProjectABE’s version of the library.

The same idea can be applied to multiple points anywhere in the screen. This is probably not the best way to tackle the problem of “Maximum Pixel-art, Minimum Code”.

Wow - another nice animation!
I feel this is moving away from the spirit of the challenge of using just “maths formula”… perhaps we should add some rules?

e.g. Entries may not create new variables or functions …?

I didn’t mean for that last one to be taken seriously, I was just illustrating my previous point. It might be best/simpler to just have a maximum char count.

It might be best/simpler to just have a maximum char count.

Would #defines separate from the line be legal in that case?

I’d guess no, since defines can’t be “in place of MAGIC”?

I tested on a pico-8 using the following snippet to map bytes 0x0…0x3ff to video – hopefully it comes out the same.