I wouldn’t have played it all of the way through if I didn’t like it. I’ve completed maybe a dozen games in the last 25ish years and this is one of the better ones.

I meant the ending! But thank you! LMAO. How did you like the secret ending?

Yeah, the ending was great

[edit] A good tip for anyone struggling with the last few levels, it’s good to double back on yourself sometimes.

@crait, now you should use the extra 1.5K I freed up with my memory optimised version to add more levels, to give @spinal something more to work on

EDIT: link to my optimised version removed as per the author’s code use requirements. 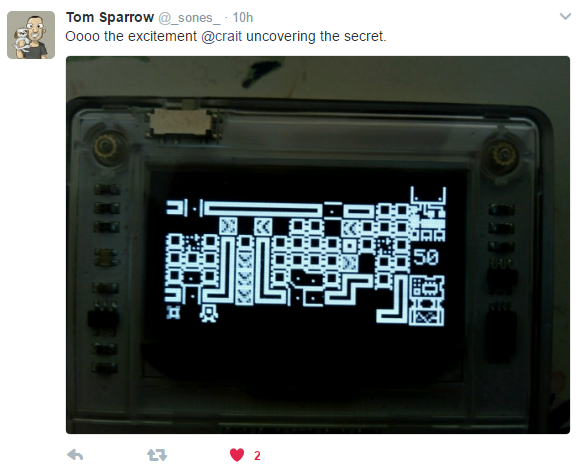 @crait, now you should use the extra 1.5K I freed up with my memory optimised version to add more levels, to give @spinal something more to work on

Haha. Now that some people are finally beating it, I’ll release the level editor.

Love this game and what you where able to do. To me one of the biggest possibilities that you have with it is to combine it with your how to make a game series. The would truly be awsome!!

Ah, yes, I’ve thought about that.

Very nice game. I like the design, and artworks. It’s on my device now.

and you are uploading it to a genuine Arduboy?

Are you choosing the Arduboy from the ‘board’ menu? I think choosing an ‘Arduino Leonardo’ from that menu will result in that same error.

@Cronck, I’m guessing that you’re using an older version of the Arduino IDE (see my next post below). You need 1.6.10 or higher. Whatever is the latest is recommended.
https://www.arduino.cc/en/main/software

@Cronck,
Sorry, my mistake. The enhancements added to the latest version of the Arduboy2 library add extra code that pushes Circuit Dude over the limit.

I suggest you use my memory optimised version:

EDIT: link to my optimised version removed as per the author’s code use requirements.

Ok ty. What a great community, I went to eat dinner and come back to answers and fix actions. I’ll let you know when I’m back to my comp and can try that. Ty both again

Yes I got it from adafruit.

Yes arduboy in boardmenu. Seems its a new problem with more data added to arduboy menu stuff. … I’m a Lil lost on that

Code is supplied for 2 purposes: 1) Ease of loading onto a device to play for users, and 2) Educational value in the case of studying the code and modifying for personal educational use. Even though the source code is available to the public, this software is not open-source. I created Circuit Dude. I coded Circuit Dude. If you’d like to play it, you can download the code. You can even link others to the code. However, re-releasing or publicly sharing a modified variation or derivative of my code and/or imagery is not allowed. The code is supplied as-is and has no guarantee of support in the future. The code is also free of charge in order to play as long as the it is not for commercial or financial gain. Finally, someone creating a new version of the game for a different platform with imagery, gameplay elements, or game design element derived from this game must have explicit permission from me.

You should put that text as a comment at the start of the CircuitDude.ino file itself.

You should also state the requirements for binary distributions, such as the .hex file or a .arduboy file. For instance, can someone who wrote a loader/manager include a copy of your .arduboy file with it?