Arduboy2 - The now recommended alternative to the Arduboy Library

Also, the refactoring of setRGBled() broke Circuit Dude by @crait, although this actually just caused an already exiting problem in the sketch to manifest itself in a different, more severe, way.

One of my favorite games been crippled

. I looked into why the problem is more severe and figured out it’s because analogWrite configures the LED pins as digital when maximum and minimum values are set. The new version sets the LED pins always to pwm.

With the new version 5 release of the Arduboy2 library, this problem, which was never addressed, manifests itself more severely. The changes to setRGBled() make it more “aggressive”, so sound is now corrupted.

I felt a little guilty about “crippling” Circuit Dude with the new version 5 Arduboy2 library, so I’ve modified it to use the BeepPin2 class for sound. The rising temperature sound is as smooth as the ArduboyPlaytune version, and the red RGB LED now increases in brightness as intended.

Just compiling the original code with Aruduboy2 library version 5.0.0 instead of 4.1.0 saves 634 bytes of program memory (and 7 bytes of RAM). This is mainly due to the optimised setRGBled() function in the new library release.

Unfortunately, @crait doesn’t want people publishing modified versions of Circuit Dude, so I can’t make my changes publicly available. I will send @crait a PM with a link to it, so he can apply and publish the changes himself if he wishes.

P.S. making other changes to optimise, as I’ve pointed out in previous posts in this topic, could save a bit more code.

I will send @crait a PM with a link to it, so he can apply and publish the changes himself if he wishes.

If you do @crait, I hope you add button redundancy too so you can choose to use the A or B button.

A post was split to a new topic: What library is best for my game sounds?

I am very excited to delve into this game. Quick question: How do I fix the text so as not to appear elongated? Thank you! 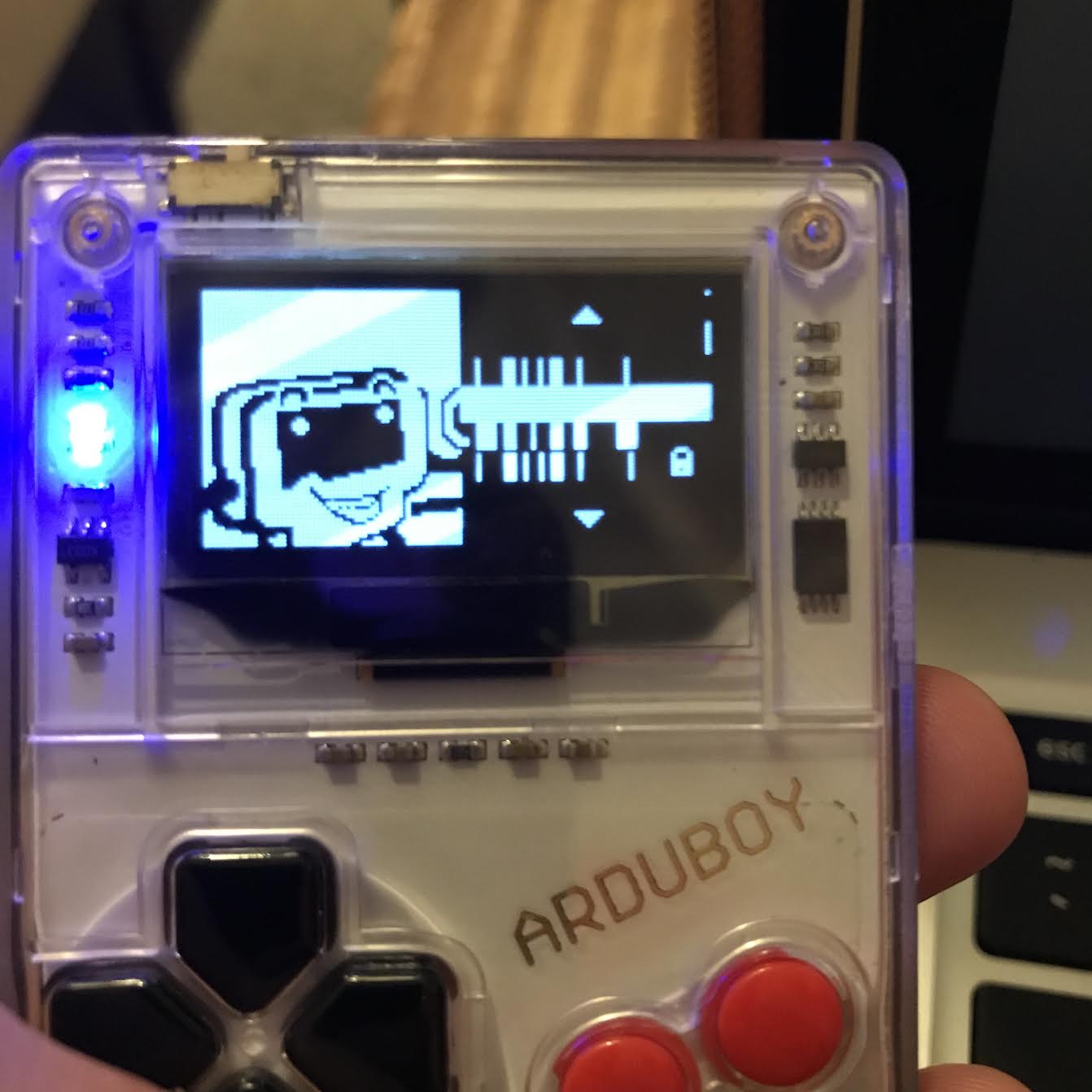 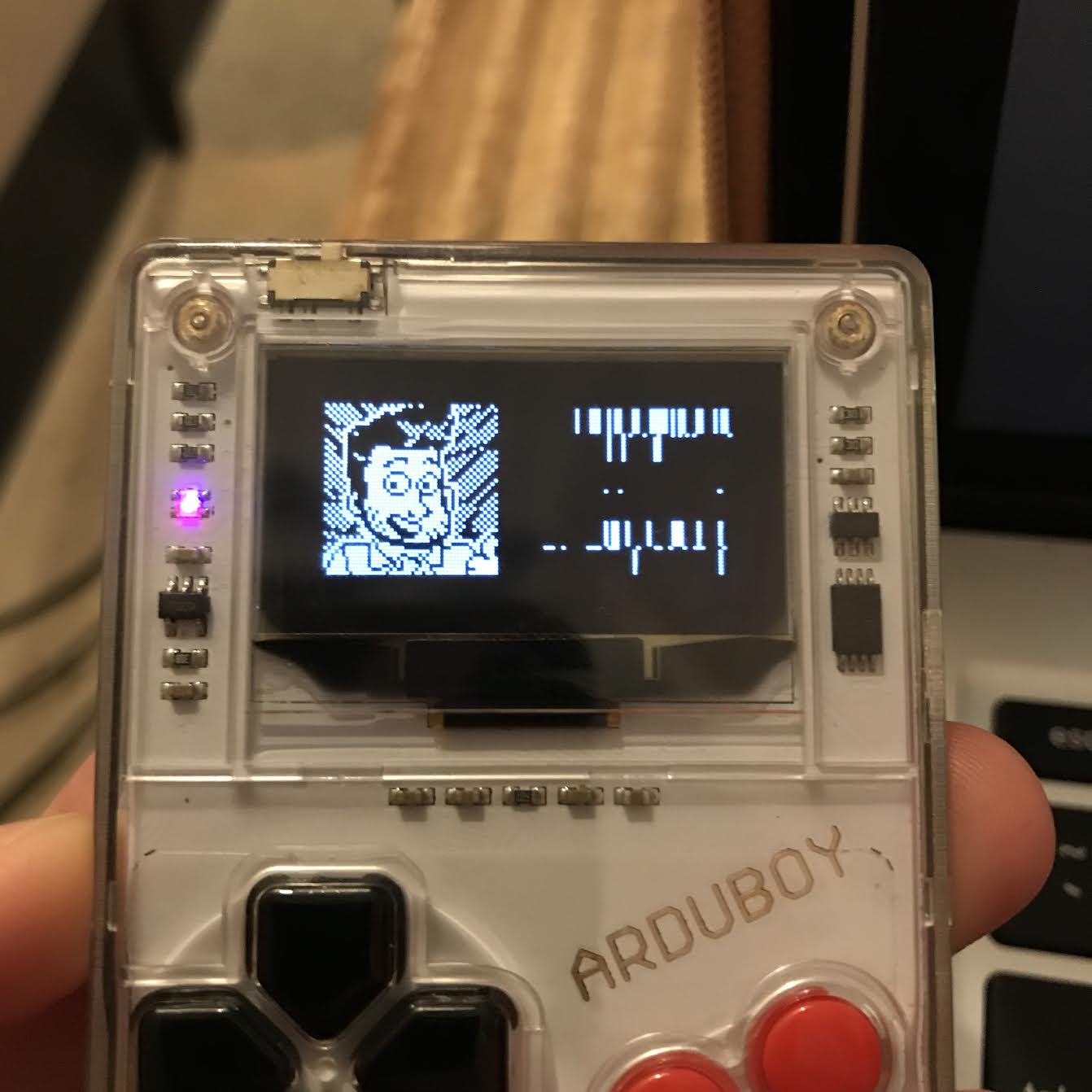 Did you compile from source? @flimote had a similar issue lately.

@flimote had a similar issue lately.

It most likely is the same issue.

It only happens with the 1.8.6 and 1.8.7 versions of the IDE.
@Mr.Blinky found a fix for that, which will be in the next version of the Arduboy2 library.

But the next release might be a while off still, we could do with a few testers/early adopters to make sure the fixes didn’t break anything else.

As the song goes:

I am currently using the most updated IDE and Arduboy2. The handheld itself is a couple of years old, though.

Your options are to roll back to the 1.8.5 IDE (which you can get here),
or take the version of the Arduboy2 library from the master branch (specifically this link) and use that to compile with.

You could also upload a precompiled hex from @Eried’s or @crait’s repos.

Even if you roll back to 1.8.5 or use the Arduboy2 pre-release and it fixes what you’re seeing, you’re still going to encounter the problem I described in this post:

With the new version 5 release of the Arduboy2 library, this problem, which was never addressed, manifests itself more severely. The changes to setRGBled() make it more “aggressive”, so sound is now corrupted. Changing sound to use the new BeepPin1 class might provide acceptable sound, without conflicting with the RGB LED. (The issue is that @crait wants a smooth sounding ramp during “self distruct”. I haven’t experimented to see how BeepPin1 will handle this). The main issue with switching … 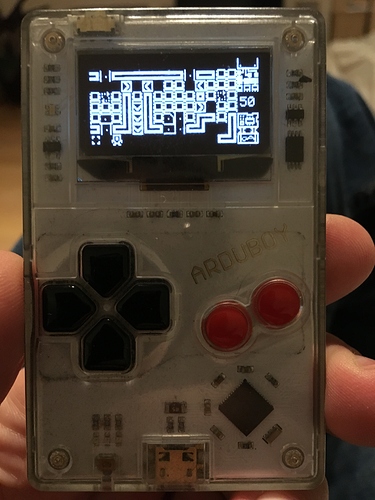 Just finished the game! And I love the secret ending (I didn’t expect that)

Great level design, I enjoyed every minute of the game! A must have for the Arduboy! Thanks @crait (even I hated you so much on some levels

) Now time to play it on Steam!

I also want to spread some love for Circuit Dude - my favourite Arduboy game so far! Excuse the shoddy photo. 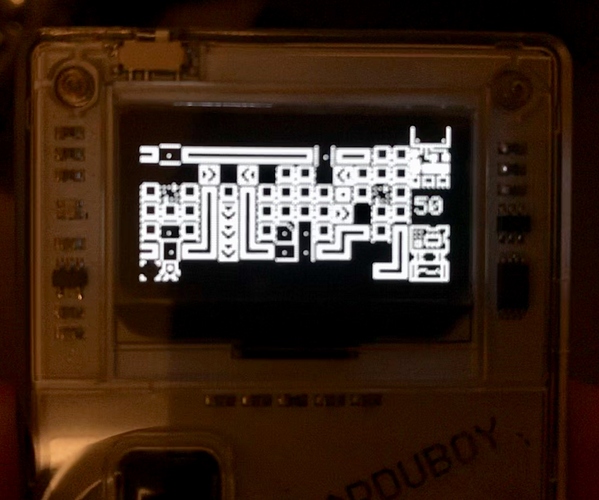 I just finished this game today, some of those levels drove me nuts lol. All in all its a great game, loved the ending.

OK … any clues on level 45? In particular the block in the lower, right-hand corner. If I approach it from the left I obviously get stuck in there so I assume I must (somehow) rotate the one to the left or the one above it to allow me to be able to move through them both. Just cannot figure it out!

Spoiler: To get that piece, you do need to move one of the two tunnels, then come back to it. Since you think you get stuck from the left, think about how you can rotate the top one, then remove yourself from the area, then rotate the two tunnels at the same time, using the button above, then go through it. That means that the tunnel needs to be vertical before you ever go into it so that when you rotate it, then rotate it with the button, it’ll be vertical, once more. My strategy when solving these puzzles (when I’m designing them) is to try to move as much as I can, placing as few chips as possible. To get these tunnels in the right orientation, you don’t actually need to touch any sockets!

Lemme know if this helps!

I will give it a try!

Im really not too big on puzzle games (other than Tetris, of course :P) but I’m lovin’ this one, and I’ve still got a lot of it left to play yet!

Although I do have to say, level 16 has me stopped dead in my tracks… just the very first part of it, to get through the first set of revolving panels, not sure why but I just can’t seem to figure it out for the life of me.

Edit: don’t know why I struggled so much with that, but this games definitely had me staying on my toes, excellent puzzles!

Lemme know if this helps!

I am still having issues (but I must admit I have been distracted from it for a short while), but I’m back!