Need hints or walkthroughs for the puzzles not covered on YouTube.

Probably need to find a better place to ask about it since the iphone version is a bit out of scope of the Arduboy, you might try asking @crait on twitter or PM him.

I did ask him to help me with level 30, but I don’t want to keep asking him. Am I better off getting an Arduboy?

Am I better off getting an Arduboy?

Everyone is better off with an Arduboy.

Thank you for your help. However, when I look at them, the screen is so much smaller than my 6S iPhone. If you don’t mind, lme know why I would want to plan a small device and if there is a larger screen. Even though I’m a baby boomer, I like to play games, especially puzzle games, and circuit dude is one I especially like. Where can I find out if there’s an A-boy screen that’s bigger.

As far as I understand it the levels are the same? I don’t know if anyone out there has done a video solving all the puzzles?

@Scharley, you can feel free to bother me as much as you want. I actually really enjoy talking about Circuit Dude. I find it really fun, even though I already know all the levels really well.

Maybe after I finish putting Circuit Dude onto the Palm Pilot, I’ll make a YouTube video of a playthrough and maybe a developer commentary. Any kinds of stuff you’d like me to cover?

As far as being stuck on levels go, feel free to ask them in this thread, e-mail me at crait.is@gmail.com, or reach out on Twitter, at http://www.twitter.com/crait

as well as some different levels that you won’t find on the Arduboy!

So how about adding those levels to the Arduboy? (Lack of memory isn’t an excuse.)

I felt a little guilty about “crippling” Circuit Dude with the new version 5 Arduboy2 library, so I’ve modified it to use the BeepPin2 class for sound. The rising temperature sound is as smooth as the ArduboyPlaytune version, and the red RGB LED now increases in brightness as intended. Just compiling the original code with Aruduboy2 library version 5.0.0 instead of 4.1.0 saves 634 bytes of program memory (and 7 bytes of RAM). This is mainly due to the optimised setRGBled() function in the new …

So how about adding those levels to the Arduboy? (Lack of memory isn’t an excuse.)

There are two teleporters in the PC version, which are differentiated by color, which the Arduboy can’t replicate. I guess I could make different sprites for them, though.

The main issue is a lack of screenspace.

When I put the game onto the PC, I realized that I could fit an extra horizontal row at the bottom of the screen, and puzzle games as complex as Circuit Dude with a scrolling screen are not fun.

There are two teleporters in the PC version, which are differentiated by color

In colours differentiable by colourblind people I hope…

(I’m half joking, half serious. Colourblindness in video games is actually a pretty serious issue.)

I definitely understand that and agree. In video games, a different color is not enough to broadcast that something is different. In Circuit Dude, the teleportation pads use patterns that are slightly different shape and move in a different pattern, alongside being different colors. This would be even harder to reproduce on the Arduboy since the sprites are 8*8. I would have to make the two look drastically different. 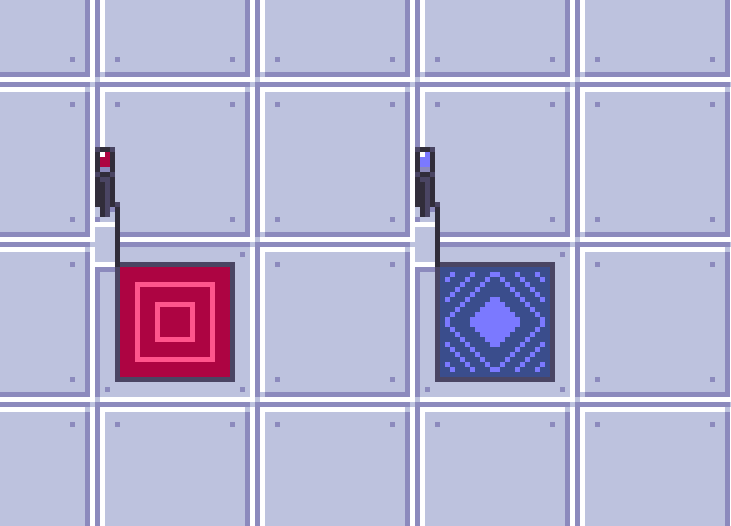