Coding a game in Arduino IDE on a Chromebook

) and I believe he said he will make the Arduboy and Codebender compatible. So does this mean a Chromebook can make Arduboy games? Sorry if this was scattered.

The Codebender setup actually won’t quite work right now for Arduino 1.6. Their online compiler is too old of a version, if I’m not mistaken, to work correctly with the new library. They are working on getting it updated, but the issue for it has been open for quite a while. I wouldn’t expect it to be updated to 1.6 in the next week.

But, we are looking at solutions that may work as well or better so codebender may not be an issue.

In the mean time, you can use the Arduino IDE just fine on a chromebook.

You can install software on Chromebooks now? What did I miss.

I believe it was a plugin, but I wish you could install software on Chromebooks.

I already use ChromeOS to prototype games in javascript, then port them to Arduboy. It’s how I made the Puzzle Pack. I’m working on another game in ChromeOS right now.

I made a mock Arduboy library with all the same function names, but I saw a much better made one someone else did that you could use, I don’t remember where though.

@Atomic So what program do you use to port them and put the JavaScript on?

http://community.arduboy.com/t/arduboy-javascript-simulator/87
Old but should still work. Javascript is very similar to C so I just change the vars to the correct types and whatnot, and it’s ready to go. You just need to be mindful of not pushing the CPU, because your computer is a lot more powerful than an Arduboy.

You can install software on Chromebooks now? What did I miss.

I think he means using codebender instead of locally using the Arduino IDE. Apparently “there’s an app for that”.

I’m a professional non-.NET VB developer (yes, they still exist!) but Basic and Java/C++/C# are different in a lot of important and not obvious places, so it will help if you already know coding, but be prepared to have to re-learn a lot of the basics.

I know it’s off topic but, can some knowledge in BASIC (Beginners All purpose Symbolic Instruction Code) help me out while I make games?

I first learned to program in BASIC on a Commodore 64, and later learned Pascal at school, and then Java / C.

Having some knowledge in BASIC is definitely a good head start, and from there learning to program in C is just about learning a new set of rules - and is an absolutely worthwhile and valuable experience.

Although, following your train of thought I did find an Arduino BASIC interpreter: 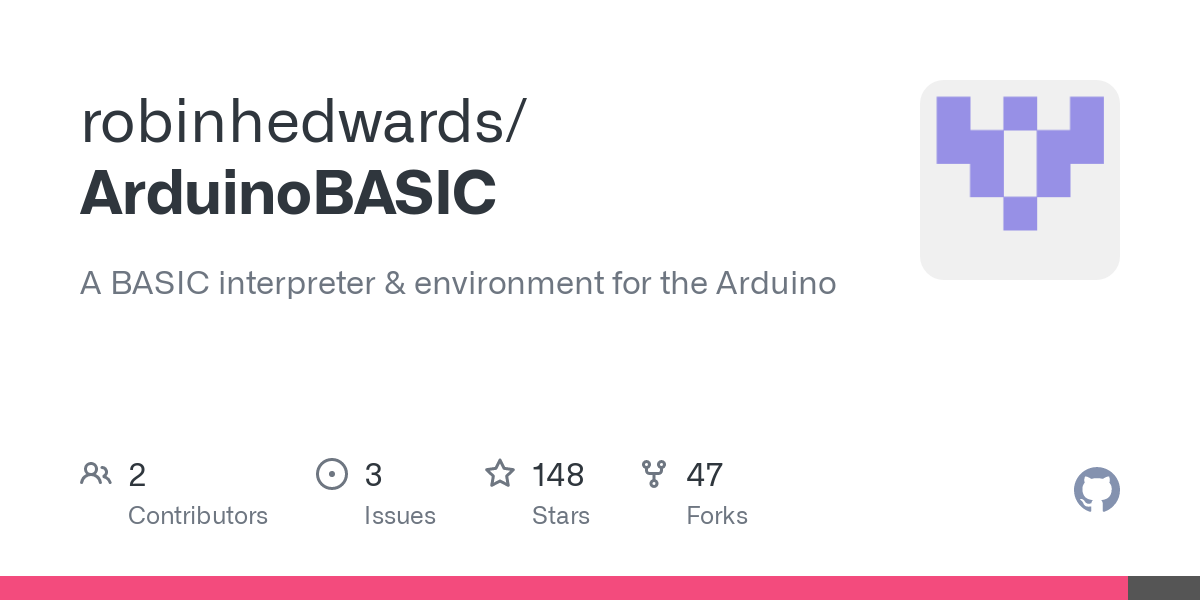 A BASIC interpreter & environment for the Arduino. Contribute to robinhedwards/ArduinoBASIC development by creating an account on GitHub.

it is specifically written for the same SSD1306 display controller that the Arduboy uses, and so would not be too difficult to rewrite for use on the Arduboy!

You would need to hack on a keyboard to be able to key in programs though, or figure out how to store your programs in the uploaded sketch…

I know it’s off topic but,

If you’re going to go off topic, you should start a new topic using the Reply as linked Topic that appears at the top right corner of a comment when the mouse hovers on a comment.

I’ve done that to create a topic for discussing the BASIC interpreter sketch that @uXe referred to.

Thanks, I’ll be sure to use that next time!

Hey everyone, just wanted to jump in and let you know that Codebender integration will be coming very soon. We are putting the finishing touches on the library and getting some games on there. I dropped the ball in haste to get the first units shipped out the door. We are now having to play catch up, and it’s causing some confusion trying to get things started.

Codebender guys have been amazing and helping getting this started. Vasilis and everyone there have been supporting Arduboy for over a year and we want to make sure the Codebender/Arduboy experience is an easy and fun one… and it for sure will be!

So please stay tuned and also if you have any challenges don’t hesitate to post in here so we can be sure to resolve them for you.

I use the following:

PS
If you’re lcuky to have Chromebook that will receive - or already has received - Android Play Store and app support then I guess you can choose that route, too.