I been following Arduboy for a while now and I think its pretty great and it’s very interesting how we can build card size electronics.

This is in no way an official response.

At it’s core, the Arduboy is an 8 bit microprocessor. In addition, adding micro SD for storage is not completely straightforward, and sound system as it is coming together is more intended for sound synthesis either for demos or games, and not really for recorded sound playback. Sound output quality also is not going to be up to any usual stereo playback specifications. There is no solid analog out for sound, either, so even headphones are not really on the horizon, let alone a bluetooth interface.

Arduboy was, I think, conceived of as first and foremost a retro gaming platform with a high degree of openness. Portable gaming platforms - even the high performance ones - have never proved to be a good fit for music playback. Most of the dedicated music players use custom silicon to tie storage reading directly to energy efficient hardware playback, and avoid bringing the relatively power hungry processor into the playback loop at all. There are lots of things Arduboy is good at, but I don’t see long-form music playback as being one of them.

Although I can see how the form factor and the display are ideal for a playback device, the rest of the hardware doesn’t match up to that requirement. I think compact and battery efficient music playback with quality sound will for now remain mostly in commercial offerings.

It would be an ambitious project, and my first intuition is to respond, “look at getting an mp3 player

But there are some products out there to get an mp3 player going with Arduino. A quick googling:

The SparkFun MP3 Player Shield is an awesome MP3 decoder with the capabilities of storing music files onto a run-of-the-mill microSD card, thus giving you 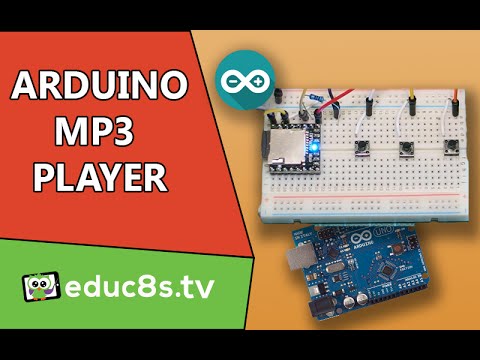 So some of these approaches might work along with the Arduboy, but you would need to expand on the platform so much, it might be worth looking at different approaches.

And then of course there are some cool MP3 players out there with a screen. Sandisk has always had some nice screens.

This is only an example - I haven’t used either this exact product or vendor. I’ve seen several like this - they all have comparable form factors, with varying pricing and shipping terms. I have one of these from a different manufacturer, and it’s almost identical - except black.

I don’t use it with my SanDisk Zip Clip, but I could. I find that for most listening, I prefer the punch and definition of my bigger wired headphones as compared to my Bluetooths - even when driven by the tiny SanDisk.

The other option I’ve seen some friends use is to find a minimal pay-as-you-go smartphone that can take CyanogenMod and a microSD card, roll the firmware to that, and just never give it a SIM card. You get a touchscreen interface, a choice of many different player apps, and likely the Bluetooth output you want. With a careful choice of device, you might not even need to go the CyanogenMod route - that makes it a buy-and-use. I’ve suggested this to a couple of people, and they get the biggest smile when they realize that just because you bought a phone does not mean you have to use it as a phone.

I mean, literally you’re suggesting that I compete with apple by making the iPod a slightly different dimension. (possibly even thinner)

This could be a great community project but probably I’m going to wait a while to tackle the most valuable company in the world.