@Vampirics and I are working on a new game that is loosely based on a Cyberpunk 2077. As you can see from the video below we have a lot to do before its complete but you can see where we are going.

@bateske that 10% share of the company is looking good. Can you please issue the shares to @filmote (5%) and @Vampirics (5%)?

I really hope you know that was a joke but if this could be finished on the FX then sharing the proceeds of a special edition would be possible.

Yes … we understood that was a joke but it obviously got us motivated a little to make something (however small).

It’s cool! If you can harness the power of the external memory then it would be even cooler!

But yeah, the lawyers would block me there I don’t have any more options to give out. There would be a lot of paperwork to be done. It would be better to just give you proceeds of a special edition since shares aren’t really worth anything unless I sell the company some day.

I am starting to build the guards who will attack you as you move through that street-scape.

The loot mechanic is a big one, a random stat generator. Trying to think how you could do inventory within memory constraints. Maybe just have your equipped weapon only?

Could also use the “save file” ability of the FX chip, wouldn’t be too bad to write to that whenever you equip something new. (not just like, everything you’d still want to limit it)

And instead of pulling the value from ram you’re using a buffer of some kind to read from the flash whenever you need it.

Actually, I have never played the game and are relying on @Vampirics to work out a game that will fit into the Arduboy.

Let me know if you need any of my help (I wouldn’t imagine why) or of course @mr.blinky on how to use the flash

Can you say more about the hacking game? I’m very interested in this!

So you have this table of numbers and sequences of numbers on the side. You are supposed to complete as many of the sequences as possible by picking numbers from the table. But you are always restricted to numbers from a single column/row. The row/column alternates after every pick, right?

How do you fail a sequence? And what is the buffer below? 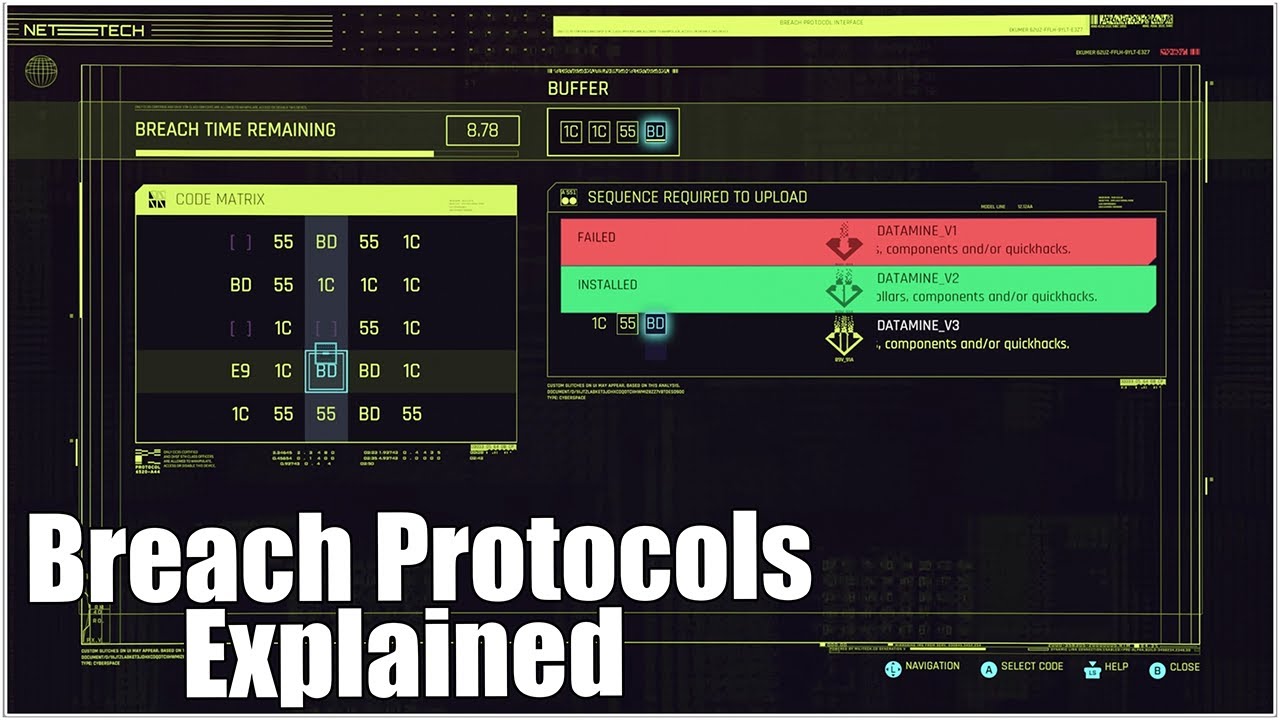 Hi Krystman! Nice to see you here. You pretty much guessed it all. The buffer is the amount of time you can activate a node. Normally at first your starting Cyberdeck wont allow for more than 4 activation, so buying better ones in the commercial district will let you activate more and let the player gather more intel to sell by installing more hacks…Some higher emd Cyberdecks might evem gibe you more time to hack.

Speaking of which, a few months back @PhoenixDowner brought to my attention the groups of people who make real world ‘cyberdecks’ (e.g. on Reddit).

Until Cyberpunk 2077 I doubt many people had ever heard of a ‘cyberdeck’, but it’s a surprisingly old concept (it seems to be over 30 years old at least).

This project is moving along slowly - with memory being the big issue. People have suggested using the FX features but not every one has one of those units (including one member in out two member team :).

As always, I just need to find a few hundred bytes - a KB would be fantastic!

I am also having trouble putting some byte beat music in https://community.arduboy.com/t/bytebeat-and-arduboytones/9599

For bytebeat like music you could try SLtones from my Shattered Lands game. I got 8 tracks for only 600 bytes total.

It appears to replace ArduboyTones - does it still play tones from PROGMEM as well?

As always, I just need to find a few hundred bytes

Try compiling it using the Homemade package with ‘Arduboy optimized core’ setting, that will save a few bytes.

Ok … any idea how I do that while using VSCode?

You can customize the Arduino path by pressing CTRL+, to go to settings and click the edit button in the top right. If you put a portable version of Arduino with the homemade package at '/Arduboy/Arduino-portable' then you can add the option:

In VScode you’ll be able to select Arduboy homemade package and optimized core.

SLtones is a copy of ArduboyTones that I heavily stripped down to get just what was needed for the bytebeat music. If you don’t need the space savings from it you can still check out how I did the music of Shattered Lands. You can even use the value of t to alter the note duration so its not all the same note, though I don’t have an example of that.

but not every one has one of those units

Write me an email plz