Hi. I’m a development kit backer - just picked colour. I have a delivery date of Oct 2015. Is this for the dev kit, the finished item, or both ? It says I should receive the devkit “after the campaign finishes” … when is this likely to be ?

The Oct 2015 date is for delivery of the final unit. I think they mention in the last update that devkits are in production. So hopefully we will get them in a month.

It sucks the devkits are taking so long. If I knew that in advance I would have only backed a regular unit and then buy one of the devkit separately when they were available a month back. =|

this is what i did, pledged for normal arduboy (changed to gold later) then i just bought a dev kit off that other site. don’t regret it one bit!

Hey guys, we have the dev kits waiting for the OLED displays being manufactured by SEEED Studio. As soon as these arrive (hopefully in the next week) then production will start.

I ordered 300 units this time, and there are 200 dedicated to the kickstarter backers and the additional units will be sold first-come-first service through Tindie. Anyone who is signed up on the waitlist on the tindie website will get an email notification when we release these additional 100 units. I’ll also probably tweet and do a private kickstarter update announcing it about an hour before, for those of you who really really want one!

Also, I have about 20-30 floating around the office here. If you want to contact me via direct message or email I can offer you a special deal if you convince me you’ll be making games for it

Also I sell them in person for $50 whenever I go to convention, and I’ll be at Maker Faire NYC in Sept 26 so that’s also an option!

Things are taking more time than we wish, honest I had hoped to shipped the dev kits already by now… but they are on the way so we really appreciate your patience!

Dev kits are shipping this week! Here is a couple pictures!

I’ve used Hong Kong Post before, and I’m assuming Seeed knows what they are doing. But if this batch takes too long I’ll use something else in the future.

Hopefully Singapore post is fast. I have nothing but good things to say about HK post (never had an issue and always fast).

Any updates on the devkits? It’s been a while. =(

They have been shipped! I just got tracking information yesterday working on emailing everyone right now!

Great to hear. Now to hope it shows up during next week while I’m on a staycation =)

Hey everyone, planning on putting some dev kits in stock on the Tindie store in a few hours! 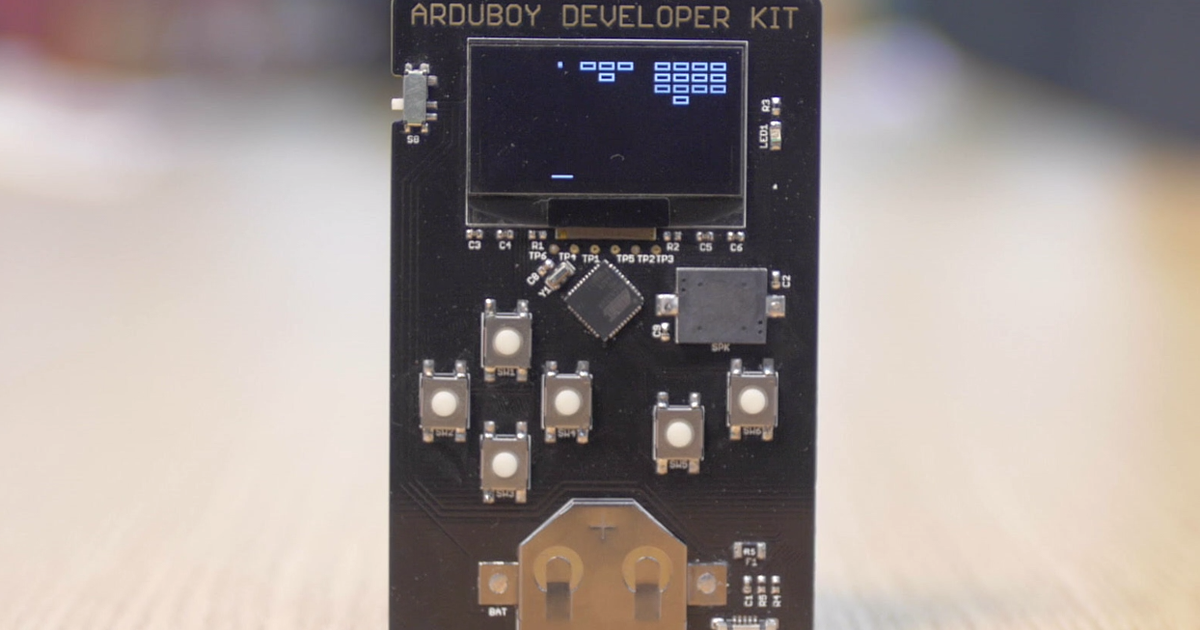 Has anybody gotten their kickstarter devkit yet? Mine shipped a while back but last update on tracking was a week ago of it arriving in Canada but none of the local post are showing it up in their system (only Singapore post). This isn’t normal for anything I’ve had ship to me in the past and I tend to get a lot of things from Asia (hk & japan mostly).

For me the tracking doesn’t even work but I guess that’s cause I’m from Belgium… (mine isn’t a kickstart devkit though, it’s an order from Tindie)

I ordered the Devkit from Tindie as well, got my shipping email last saturday. Tracking doesn’t work, no sign of the kit

…But that didn’t stop me from starting to write something, substituting SDL for the Arduboy library

Tracking finally works for me now, seems it just takes a while

When were you actually able to order yours DSSiege?

I placed my order on the 22nd of September and got the email with tracking number on the 27th.

Sorry about the SNAFU with the tracking numbers!

We shipped these units during a holiday in China so they got stuck in customs leaving the country. They get the tracking numbers activated once they arrive in Hong Kong so that is why there was a delay. It looks like some of them are becoming active so that is good, and others have already recieved their units already.

It may take some time, we are still working on trying to provide a better shipper that gives more reliable tracking that is cost effective from China. One easy update we are looking at is using DHL to ship all United States orders together to our office in Portland then shipping by USPS from there, this would give us a lot more control on the process.

Since we have so many international customers, drop shipping from China still seems to be the best method. We are aware this isn’t the best so we will fix it eventually.

If you don’t get your dev kit by the end of next week just let me know and I’ll get you sorted out.

Thanks for your patience! I know how much it sucks waiting for fun things to arrive!

It may take some time, we are still working on trying to provide a better shipper that gives more reliable tracking that is cost effective from China. One easy update we are looking at is using DHL to ship all United States orders together to our office in Portland then shipping by USPS from there, this would give us a lot more control on the process.

Please include canada in this. My devkit tracking is still only showing that it supposedly arrived in Canada on the 27th but no local post tracking shows it (Canada Post or Purolator) and there is no update or movement on Singapore post since then. =(

Yeah we hear you, we’ve shipped hundreds of stuff this way and only a couple have not arrived so hopefully patience is all we need.