Most up to date version of the game so you don’t have to scroll to find it:

The objective of the game is simple: Fill the cup

There are 10 unique levels. Some challenging and some just pure fun all mixed in.

After you complete level 10 the game will enter a new mode, the time trial mode where you have a set amount of time to complete the level and progress to the next level.

Beyond level 20 the game will repeat over and over but giving you less and less time to complete the levels.

Up, Left and Right control the particles.

B button held for around 2 seconds will reset the level.

Down and A on the same frame will allow you to skip a level however this is not intended for regular game play, but is a feature I left in for those who want to use it. 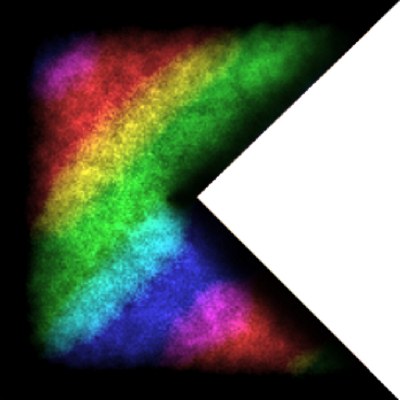 A game with a simple objective: fill the cup. Contribute to Spartanfox/Arduboy-Fill-The-Cup development by creating an account on GitHub.

Heres the game in its current state

This is really impressive! I’ll be interested at taking a look at the code when you upload it

The story is you’re outside on a hot day and you notice a friendly cloud of smiles has rained on a flower next to you. Your objective is to get that rain and fill your cup with it. But if only it were that easy.

I might add checkpoints to the game but right now there’s none. You can press B to reset.

This version has 500 particles and so if you upload it to your arduboy you have to put it into flashlight mode to upload a new sketch. If there’s a way to solve this and still have a bunch of particles I would love to know.

The game is actually completeable now due to the particles becoming 5 times slower when inside the bucket meaning tomorrow I’ll have to work on a scoring system based on how long it took for you to complete the game and then maybe improve the graphics of the level.

I have plenty of ideas for levels but since the size of the game is taken into account I’m going to keep it at one level for now.

Nice. Got to 90% before I lost patience.
Would be nice to add some basic goals: Setting a level = some percentage . Even just a quirky rating (novice, amateur… master, deity, etc.) or medal system (bronze, silver, gold, etc.).

The flashing Percentage is quite distracting… Perhaps drop 1 digit and only update if the value has changed?

I really like your incorporation of graphics. The particles ‘feel’ more floaty and snow like. I can imagine a snow globe mode, perhaps with different city scapes/ famous landmarks/ scenes.

Thank you very much for the criticism it’s exactly what I needed I hope I have solved all the issued in my next version which I will be uploading after this post.

I have made the game much easier, I manage to complete it just over 1 minute whereas before It’s like 4 or 5 to fill the cup without spilling it all out again.

The percentage had to be flashy to prevent the particles from getting stuck within the lettering which is now fixed by adding a box around it.

I also like the difficulty suggestion but I would implement it not by filling the cup by a % but instead scale how easily they fall back out of the cup but I haven’t added that I just made the game easier by default. (The emulated version was running a little faster too making it even harder but that should also be fixed I hope)

I love the snow globe idea too, I think I might do a snow globe themed game using my particles at some point though I’m already developing my next particle themed game so it’ll have to come later.

Next version of my game is here:
Emulator still runs it much faster so the game is easier on the actual system if you upload the hex file to it.

A hint to completing the game is tapping the up to ease the particles up without spilling the other ones out.

This is an intended feature I added for extra difficulty which can be scaled but also fully disabled to particles never come out of he cup once in so I’m interested in knowing if people would prefer them to stay in permanently or enjoy the sprinkle of added difficulty.

The timer and percent don’t flash anymore since there’s now a border stopping the particles from colliding with them making the game nicer on emulator too.

Difficulty has been reduced to a point I think is good but this would still require testing by others as I find the game easy having made it.

I want to work on a new game using my particle mechanics but with actual level design and effort being put into the game play, however I think it should be it’s own separate game and so other than trying to reduce the code size of this one and fixing difficulty issues I’m gonna call this game done.

I think level of difficulty is good as it is challenging to get all in but still not impossible. More levels would be great but i like it.

Also the way you managed the particles that are already inside the cup to stay longer inside but still go out if you keep pressing is a really cool feature.

Are you using nextFrame() to run the game at a fixed frame rate? If so, you could try temporarily replacing it with nextFrameDEV() to see if your rendering time is taking longer than a frame duration.

With nextFrameDEV(), if the TX LED flashes then you should lower the frame rate or improve your rendering time. If the TX LED doesn’t flash then the game should run at the same speed on both the emulator and a real Arduboy.

I have been using it and the light only starts flashing when the majority of the particles are in the cup which is an issue that ill have to check but it’s only a difference of 5fps so my game runs at 55fps then drops to about 50fps near completing the level.

I have noticed that almost all the games I’ve tried run really fast on my computer though and it works perfectly on mobile so it seems to be my laptop that’s running them too fast but I got no clue what would cause that or if anyone else has this Issue.

How does the following sketch run on your computer compared to an Arduboy? In the emulator on my computer, it runs slightly fast. Emulated 100 seconds count is done in 95 seconds on the Arduboy.

It counts up to 100 in 26 seconds so just over twice the speed which lines up with what I found in my game when I was messing with the set framerates, I set it to about 20 or so fps before my game started running correctly

Then it sounds like you need to find out what it is with your PC that causes the emulated Arduino system clock to run fast. Like I said, my PC doesn’t have this problem.

You could start a new topic asking if others have experienced the emulator running fast to the extreme that yours does.

Maybe @FManga, who developed the emulator, could shed some light on the problem?

I just checked the github and actually found someone with the same Issue and mentioned it might be their screen refresh speed.

Ill post in the project abe’s thread. This issue might be whats causing other peoples emulations to be slightly off if there’s a dependency on screen refresh rates so hopefully it can help. I guess with my screen being so ridiculously high in hz I get the worst case senario.
2 Likes
Spartanfox (Person) August 24, 2020, 7:07am #21

Since everyone elses games looks so nice I thought I would redo the graphics to the best of my abilities. The birds have 6 frame animations and the cloud has some animation too.
This has also reduced the size of the game and also improved the performance
fillthecup2.ino.pretty.hex (26.0 KB)