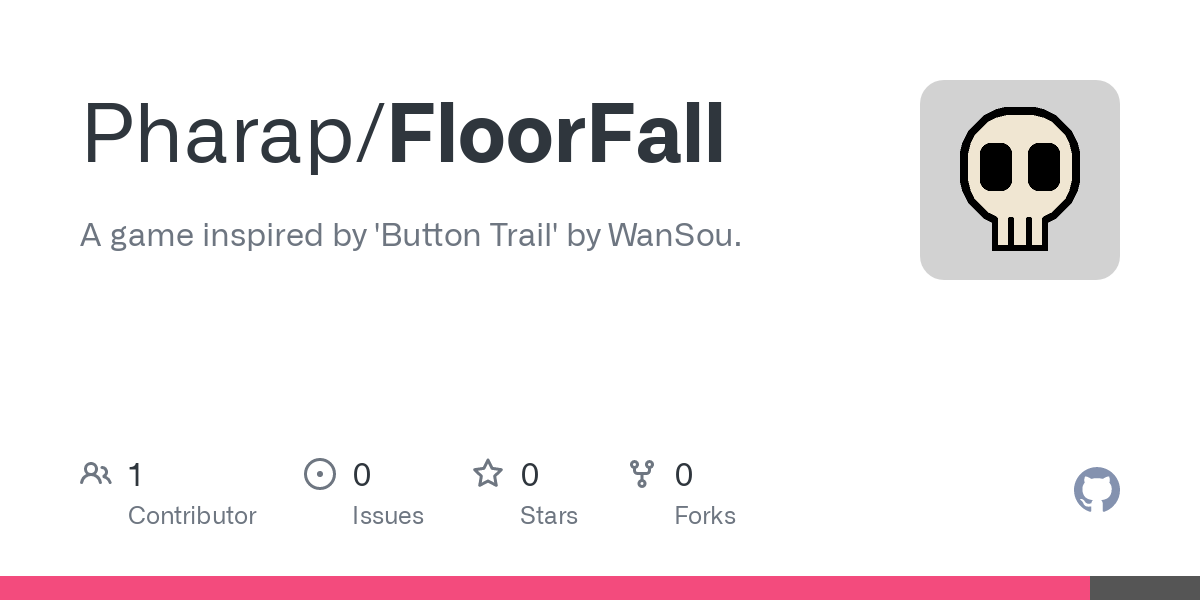 GitHub - Pharap/FloorFall: A game inspired by 'Button Trail' by WanSou.

A game inspired by 'Button Trail' by WanSou. Contribute to Pharap/FloorFall development by creating an account on GitHub.

A game inspired by 'Button Trail' by WanSou. Contribute to Pharap/FloorFall development by creating an account on GitHub.

My ‘entry’ into the ad hoc ‘Button Trail jam’.
(Though with only three entrants and no prizes, it’s not much of a jam.)

There’s only 11 levels at the moment because I didn’t have time to design anything complex. Progress isn’t tracked at all.

I’ve added a string system, so translations are a possibility, although at the moment there’s only two strings being used. (I’ll possibly add ‘success’ and ‘failure’ at some point if there’s any interest in doing translations.)

To be honest, I don’t know if I’m going to add to this at all.
I had more fun throwing together the code in the Flash folder than I did making the actual game.
(Which is actually a rewrite of some code I wrote years ago for a library I never released.)

There’s quite a lot of commentary so if nothing else hopefully it’ll be useful for learning purposes.

It only uses 38% of progmem, so there’s plenty of room left over.

P.S.
I had to add the ‘Tile-based Puzzle Game’ subtitle because the forum decided that without it:

Title seems unclear, most of the words contain the same letters over and over?

I really like your “logo”. Or what that resembles it.
Maybe a hint on pressing A or B button? Timeout?
Anyhow.

It only uses 38% of progmem

It’s quite a simple program. There’s nothing to be picked upon beside maybe a slightly more fancy level selection and level display (boarders with drawRect?)

There’s only 11 levels at the moment

I’m sure there will be more.

because I didn’t have time to design anything complex

My ‘entry’ into the ad hoc ‘Button Trail jam’.

The jam is on!

I really like your “logo”. Or what that resembles it.

Thanks. It is indeed a simplified version of my logo.

Maybe a hint on pressing A or B button? Timeout?

Hrm, I could do I suppose.

I’ve just always presumed that people will naturally start pressing buttons after they realise that nothing is happening.

I have considered doing that, but I’m still undecided on precisely how to make it more interesting.

I’m sure there will be more.

If I have the opportunity and can think of anything decent.

Otherwise, if anyone wants to contribute some level designs, I’m open to suggestions.

The jam is on!

How do we know when it’s over?