As I said in the third post in this topic, ArduBreakout and SetSystemEEPROM from the Arduboy2 library examples would be good to include. Do you need anything from me to have this happen?

It would help me out for me if you compiled the hex, zip the source and make a title image and put it in the tools folder and issue a pull request. I’ll add it to the CSV once I merge the request.

I see various image sizes in the repository. Is any particular size better for you?

Images should be 128x64 monochrome.

The emulator spits out 512x256 so a lot of them are still at that I’m going through and reducing them as I go modifying them. But if they don’t need to be modified, the script automatically resizes and down samples them, you just have a chance of them looking wrong if they aren’t scaled 1:1 or have other colors.

@bateske You may put “Cutie E” in Skill.

I feel like Catacombs of the Damned! could really do with a better image for the game select menu:

@vampirics made a quick one here that already is an improvement:

Just had a quick go at just making it as text. Could find more time later or tomorrow for something more elaborate if needed. [COTD_TitleScreen]

Edit:
Pasted the logo that @vampirics over a screenshot of the game:

Edit2:
Also made a new logo for MicroCity. Might be too cluttered with the background? Shows what the game is though.

I think they look good - micro city is not too cluttered in my opinion.

I like them too I was planning on updating catacombs on my own glad you did it, but… is that horizontal line supposed to be in catacombs?

It got cut due to the questionable background image.

That horizontal line was in the logo that @Vampirics did. If you think it looks better without it then go with that!

Just realised because I hot linked the git repo for the old splash image and it got updated it makes my last post a but confusing!

Ok I think this is final draft #1
https://bateske.github.io/ArduFXTest/

Check it out, I think I was able to edit all of the title pages that didn’t have it’s name in it. I used a custom font so it should look a lot nicer.

I don’t have the game jam games in here (yet). I am going to submit this for quotation and then update the .bin file with the factory before production starts.

Its not my game, but I think you really need Donkey Kong Jr

Yeah but trademarks unfortunately. If it was called King Kong or Big Monkey or something would be fine.

Ahh … of course. I will talk to Michael and see if he can change it.

Oh cool, I made it so you can drag/drop and sort the games. It doesn’t “do” anything yet, but it’s the first step into letting you edit your own carts.

Need to put the meta data from the CSV in each div, so I can rebuild the CSV. Then make a “unused” or “side table” so you can take out games. The last step is the creation of new categories or games by uploading from your PC, or even better if I could just make the script some how point to local content (but I don’t think that’s possible?) That will at least be a tool that makes the CSV for you visually.

Then will need to get the python script to run on the sever and spit out the bin file to you!

It seems that the PUZZLE category was subdivided before I knew it.

Besides, I created a pull request to replace ‘ardubullets’ files.
Please check it out.

Replace 'ardubullets.hex' and '.zip' because of version up.

That's it folks the final published list of 232 Arduboy games with their developers to be featured on the first production of the Arduboy FX! community.arduboy.com/t/goldcart-pro… https://t.co/bDRyYha3jJ 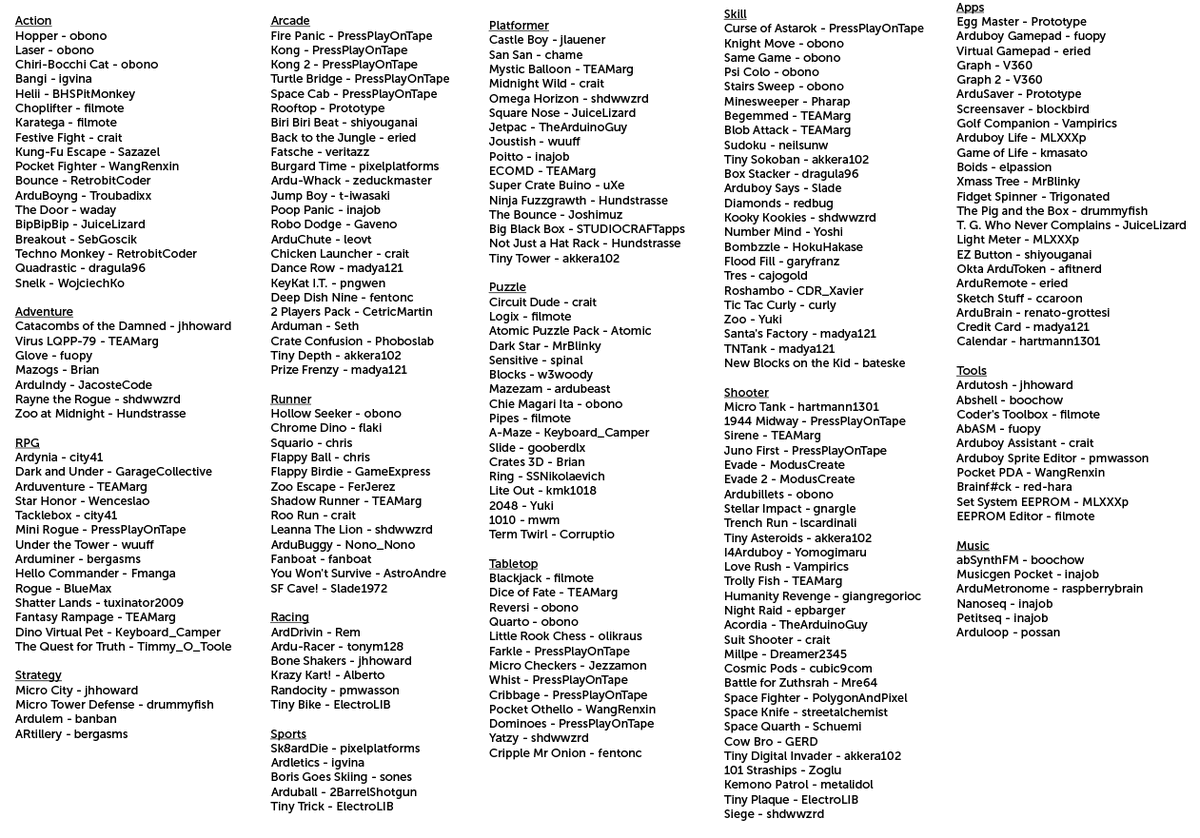 So this is the “final” list for the first batch of pre-programmed ones I can update it later to include the game jam 5 games!

Let’s say I had a change I wanted to submit. How soon should I try to get that in?

ASAP, I’ll probably compile the .bin and send it to manufacturers for quote. I’ll get another chance to update it later right before production (in a month or so), but that doesn’t always happen smoothly.

Production will be done in smaller batches so the chances for updates to the firmware will be much more frequent.

Also keep in mind the ability to update the cart is easy, although I don’t think most people will.