Also it fits better with the name ‘goldcart’.
Goldcart is a ‘cart’ (collection of games) rather than a physical golden cartridge.

Also the physical cartridge used in the prototypes isn’t likely to be discussed as much, and probably won’t be mentioned at all in marketing/PR stuff.

Either that or refer to both as ‘cart’ and differentiate between P carts (physical) and V carts (virtual) when necessary.

I’m just gonna refer to it as a HexBomb and the actual cart version a HardBomb.

@filmote oh I thought that had already been discussed in a secret dungeon somewhere.

Either that or refer to both as ‘cart’ and differentiate between P carts (physical) and V carts (virtual) when necessary.

Nothing is physical any more we are in the metaverse.

If it happens it’ll probably be a part of the contraption @tuxinator2009 is building.

I’ve got the initial parts setup for the ArduManFX utility I’ve been working on. https://github.com/tuxinator2009/ArduManFX For those who aren’t aware, this utility is a GUI tool based on the python scripts created by @Mr.Blinky for managing flash cart images for use with the RAM expansion. This tool is still in a very early alpha stage right now but it is able to download a cached copy of @eried’s “unofficial” Arduboy repo and allows you to upload any of the games to your Arduboy. Later it w…

Currently I’ve got the flash writing routines fully functional. Now its just finalizing the GUI part for creating a custom flash cart then its done for the core features.

Hey @filmote and @Vampirics I’ve got one field in the csv for developer what would you like to have be there? I’d like to avoid any non alpha characters too. (or spaces really, I might be able to make an exception)

If you cannot have spaces or the name is too long then PPOT will work too.

Is there anything you need me to do for PPOT games?
I vaguely recall something to do with wiring.c but cannot find the reference to it.

Cool, hopefully have a sorted version published soon with a web tool that easily lets you see all the games and their title screens. I’m actually hopeful I can turn it into a tool to make your own cart and you just download a .bin file from the website, it looks like I’ll be able to run python on the server. (maybe?)

Then if you want to have a different title image for your game (or are so kind as to offer to spruce up a game that doesn’t have one), or want to make any final updates to your game before it’s published you can do so by making a pull request.

Hopefully get it published by the end of this week, maybe next week. I’m getting shipments of Arduboy and MicroArcade in so it will be a busy one.

After that I can clean the office and start filming a video.

Then if you want to have a different title image for your game (or are so kind as to offer to spruce up a game that doesn’t have one), or want to make any final updates to your game before it’s published you can do so by making a pull request.

I love this idea.

Hey @bateske, would love to know what fields are recorded in your CSV (and format restrictions). Any reason to avoid spaces?
My hope is this can be generated from the Google Doc spreadsheet I initiated.

@filmote and @Vampirics - I’ve been documenting the ‘PPOT’ games- wow! You guys are prolific!

I can add whatever columns we want but yes nobody is doing anyhting to maintain tag integrity here we don’t have any key values lol. Do arduboy games need serial numbers? My data analyst is triggered.

I’ve also realized it’s a shame it doesn’t key up to @eried repo either.

I never claimed to be a professional.

it doesn’t key up to

what do you mean with does not key up?

BTW for the ratings I just use a very simple hash:
https://arduboy.ried.cl/repo.json 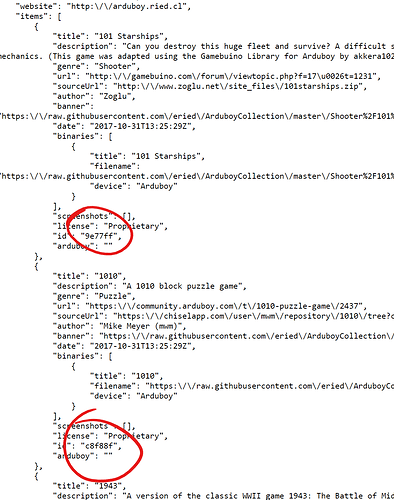 But does not assure no collisions

I didn’t say it couldn’t, I said it doesn’t.

The csv as of yet does not use these id and also that hash does also require the name and developer to be identical. Which I guess doesn’t even really matter for what this CSV is actually intended to do.

There is no solution here that doesn’t require a bunch of manual effort any way you cut it so instead of wasting time trying to figure out I just started doing it. Not letting perfect get in the way of progress here, we gotta ship this.