It’s not actually 2023 for me yet, but I know everybody is in different timezones, so this is probably close enough for everyone

. I’m going away to Niagara for the next few days, and I’m not allowed to bring my laptop or my Arduboy

which is another reason I’m wishing you all a great 2023 right now!

My New Years resolution is to branch out my programming skills (Python is a big choice for me, just because I think it’s syntax is interesting, even though everyone says it sucks and it’s a trap)

I hope that everyone has a cool and awesome 2023!

so this is probably close enough for everyone

It would have been 8 minutes to midnight for me.

I never realised until today that Niagara Falls was in both the US and Canada.

(That probably explains why Annie Taylor ended up on Murdoch Mysteries.)

even though everyone says it sucks and it’s a trap

I wouldn’t say it’s a trap, but there are many much nicer languages out there.

I’m still convinced that half the reason it’s so popular is because Google keep funding bootcamps for it because they want their pick of developers. (Also, Python’s creator worked for Google in the late 2000s.)

I don’t deny it’s got a huge selection of third party libraries, but as far as dynamically typed scripting languages go, there are nicer ones out there.

I’ve only ever made one New Year’s resolution (in 2015) and currently have no intention to make another.

It would be called an “Ultrawide 2K” or WQHD

Note: This monitor is a business expense thank you arduboy fans!

Strictly speaking it’s 21.5:9, but sellers tend to leave off the .5 to avoid scaring people.

This monitor is a business expense

Clearly I’m in the wrong job.

It’s easy to justify if I am sitting in front of it for a majority of my day. Too much probably

I have stopped myself from getting this one a couple times, but waiting on moving to somewhere I can have a permanent setup.

Useful for excel and email as much as gaming. 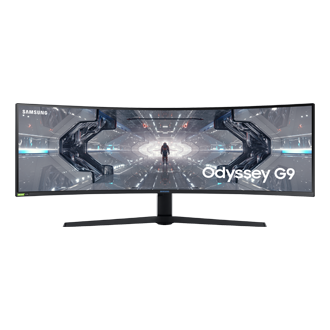 I never realised until today that Niagara Falls was in both the US and Canada.

Haha. When we went there the whole US side (Buffalo I believe) looked so sad and boring compared to the other side. Our “vacation” got cut a little short though, but since no one asked, I’m going to tell you the entire story

Basically, in the hotel room, I fell. This is going to sound so stupid but my pants weren’t “thick” enough, so my mom made me wear pyjamas underneath the pants, which were tucked into my socks. In the hotel room, I forgot to un-tuck the pyjamas from my socks, and when I was walking around, I fell and got one of those carpet scrapes. My mom is like the complete opposite of an anti-vaxxer and she was so mad when I fell and said how it’s the worst possible thing I could have done and then she completely alcohol-ed my legs (ow). Later though my mom got so pissed at me and said she wanted to go home. The worst part was me and my sister had to leave in our pyjamas. Worse though was I look really old for my age (I’m taller than my 17 year old sister who’s average height and who’s 5 years older than me, you could actually mistake me for 14, 15 maybe 16 at a glance) and it’s fine if like a 5 year old kid is walking around in their pyjamas but when you get older it’s just weird. Even worse though was right after we exited the elevator there was a girl who looked my age or something (I never looked, but I assume, I’ve learned if you don’t give somebody a shit, they won’t give you a shit back) and right when we passed them I’m pretty sure she looked at my pyjamas

. Anyway we got home at like 2 AM, but at least we got to see Clifton hill (the last time we went there I only remembered the Frankenstein Burger King).

What a way to start off the year.

Whoa! what kind of resolution is that???

My Arduboy resolution is still 128x64

I’ve resolved to make a game this year (of ANY scale). This will be my first foray into games and actual coding, so I’m keeping my expectations tempered. This isn’t my first foray with this resolution however haha - but this time I’m freshly unemployed and taking this month to set aside blocks of time and make some serious progress towards this long held goal of mine. Excited to be here!!

I recommend starting here: Make Your Own Arduboy Game: Part 1 - Setting Up Your Computer (it’s where I first learned as well)

Those lessons are helpful but I hope they get updated to include instructions on how to store and retrieve things from the FX chip. I’m hesitant to start on a new game for the jam because it seems overwhelming to get started with that.

Yep. I still can’t find the documentation for the FX library functions and stuff.

The game jam thread has some helpful links in the Resources section. I guess I just need to dig more into those.

Thank you Ard_Flamingo! I managed to find those two again before posting too, glad to know I’m on the right track starting there. Ha, I think this will be my third time following the “Setting Up Your Computer” lesson. Third time’s the charm!

@raspberrybrain I’m worried about that too. I was hoping to come up with something small for the themed jam, but learning the FX chip capabilities and use on top of the basics seems like too much for a total beginner to attempt. Thanks for a reminder about the Resources section in the game jam thread. If I make it past my first game baby efforts in time I’ll head over there and start reading up on it.

I’m honestly completely overwhelmed by everything in that Resources section too. The fact that I’m a Mac user doesn’t help. For example, just installing the Arduboy FX Arduino plugin has been impossible for me since it involves replacing files depending on your OS, and it’s very difficult to know if I’m replacing them with the correct files. I don’t see myself getting any further than I’ve gotten with using the benefits of the FX chip, which is currently nowhere.