How to upload a .hex to the Arduboy?

Good suggestions so far, hopefully more will come (maybe someone knows of some Mac and Linux options).

I’ve decided to list them up top in case the list gets particularly long, so people don’t have to scroll through all the comments.

We’ll a provide .arduboy file not a .hex file. 95% will be windows, so those people can use a Game Loader. Mac (like myself) and Linux users. can upload on command line (and we’ll explain how to extract the .hex file). We’ll provide a step by step how to.

BUT we’re also still working on a macOS version of the Game Loader with mixed results. My team working on it isn’t used to develop for macOS, so it’s a long search (especially on serial connections).

And once and for all, after all backers have received their “paid for” version, we’ll release the source too.

Well, you can use avrdude on the mac. Or Windows, Linux, etc. The hard part is getting all the settings right, and recent versions understand “arduino” a a programmer type for programming arduinos, though the Arduino API doesn’t seem to leverage that. So getting the partno right (it’s atmega32u4) should do the trick.

There are also GUI front ends available for it that run on the Mac & Linux for those who are uncomfortable with the command line, The easiest to install seems to be Burn-O-Mat, as the others are Java or Mono zip files that require the appropriate incantations.

Thanks @mwm, I was unaware you could load a .hex file using avrdude. Is this something you use and if so could you document the process for the community?

As @filmote said, do you have any idea what the right settings are?

I’ve attempted to use avrdude in the past with something along the lines of avrdude -p m32u4 -c arduino -P COM# -U flash:w:"file.hex":i but with no success (the command line just locked up, it would not even accept ctrl+z to cancel).

I was unaware you could load a .hex file using avrdude

Yes, in fact all uploaders use avrdude internally.

Just how do you upload a .hex file to the Arduboy?

I always go to github and download the zip with the source, then wait few minutes for arduino, compile and fiddle around selecting the right port and… just kidding I always use my uploader of course

Is it Windows only or does it do Mac & Linux too?

(Knowing you, I’m guessing it’s written in C# and thus needs Wine to run on Linux.)

Yes, only Windows. And does not work on mono nor wine because depends on avrdude.exe, so no Linux/Mac

Yes, in fact all uploaders use avrdude internally.

do you have any idea what the right settings are?

If you upload a sketch using the Arduino IDE and set checkbox Show verbose output during: upload in the IDE preferences, somewhere in that output will be the avrdude command it uses, including the switches and options.

avrdude works on Linux and Mac, so it’s possible it might work with mono/wine if they support whichever function you’re using to start avrdude.

I assume you’re using System.Diagnostics.Process.Start to run it?

It seems it’s not quite that simple.

Aside from pulling both the avrdude executable and config file from %APPDATA%, it seems that before calling avrdude the IDE does something significant to the COM port that severs the Arduboy’s connection to that port and moves it along to the next free port in preparation for the avrdude upload.

And attempting to replace COM5 with COM4 yields many

Connecting to programmer: .avrdude: butterfly_recv(): programmer is not responding

messages, until it eventually gives up.

Maybe… never tried. All the steps are very clear in my uploader source. I am pretty sure most of them work in mono, but there is stuff that I do not know, for example how to handle the “arduboy:” links in other platforms

In that case you’d have to be able to detect the OS and provide the correct copy if you’re providing the executable.

If are allowing the user to provide the avrdude path rather than letting the program provide the executable then it should work (assuming wine/mono are implementing Process correctly).

Yeah, it would need to be changed to run with mono/wine.
It’s a shame, but it’s probably not worth the effort.

Well, it is a resource just for convenience of having a single exe. For a mono version, avrdude could be required as a prerequisite.

But it just drills down to the low interest I have in mac stuff in general.

I’d consider having a go myself, but I don’t have access to a mac, so I’d be flying blind.

Plus I’d have to substitute ManagementObjectSearcher for a custom class using that interops some of OSX’s OS-specific library functions, which could get a bit hairy.

It seems it’s not quite that simple.

Well, not quite, but if you’re pulling values from %APPDATA%, it seems like you’re doing it the hard way. I get the following output for mine, copied directly from the log window:

The Arduino bootloader is only active for a short period after a reset. You can force that by toggling one of the tty control lines, which is what the various loaders do before running avrdude.

For real arduino’s, hitting the reset button works fine. The Arduboy doesn’t have a reset button, so you have to power cycle - which also causes the USB devices to be reset, which can cause the serial port to change if the PC doesn’t shut down the old device before the new one is set up.

Personally, I power off the Arduboy, set up the command line, make sure the old serial device is gone, power on the arduboy and hit enter. That works pretty reliably for me.

if you’re pulling values from %APPDATA%

That’s what the verbose output gives.

The Arduboy doesn’t have a reset button 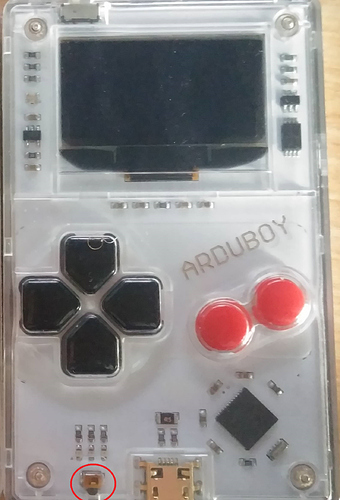 And I’m glad you mentioned it because it seems using the reset button with proper timing got avrdude to work. Seems doing it too much in quick succession does leave the old COM port occupied, but it’s pretty predictable. On my computer at least, the Arduboy only ever occupies one of two COM ports.

It seems that setting up the command line, resetting the arduboy and then pressing enter does the trick (assuming the COM port is right).
It works for both the version bundled with the IDE and the one living in AppData.

I suspect the process on a Mac will be much the same.

That’s what the verbose output gives.

Ah, so Windows apparently expands this stuff after the invocation instead of before. But I didn’t have the verbose output to look at.

On my computer at least, the Arduboy only ever occupies one of two COM ports.

It should be searching them in order, which - if you’ve got nothing else plugged in - means you get the first one, and sometimes the second one. The Mac tends to use long messy names; both my Arduboy and Leonardo show up as /dev/tty.usbmodemFD131; if I plug them both in at the same time the second one becomes /dev/tty.usbmodemFA121. Not sure what’s going on there.

BTW, another - possibly easier, depending on how hard it is to find the arduino command - way to get the command line if you’ve got Arduino installed is to run “arduino --upload --board arduino:avr:leonardo --verbose --port” followed by the serial port and a .ino file. Unfortunately, the command line doesn’t support just uploading a .hex file.

Ah, so Windows apparently expands this stuff after the invocation instead of before. But I didn’t have the verbose output to look at.

I think the IDE is purposely feeding it an absolute path, if it was splatting the %APPDATA% environment variable into the command line I think it would show up as %APPDATA% in the verbose output (I think, %APPDATA% is not exactly something I have to deal with often). I can’t be bothered to check the IDE’s source code to find out what’s actually happening. Whichever way round it is, the result is the same.

It should be searching them in order, which - if you’ve got nothing else plugged in - means you get the first one, and sometimes the second one.

Theoretically, but if that is the case I don’t know what happened to COM1, COM2 and COM3 because they never get used by the Arduboy and they don’t register as being in use by anything else.

BTW, another - possibly easier, depending on how hard it is to find the arduino command - way to get the command line if you’ve got Arduino installed is to run “arduino --upload --board arduino:avr:leonardo --verbose --port” followed by the serial port and a .ino file. Unfortunately, the command line doesn’t support just uploading a .hex file.

Good to know. I won’t add it to the list as this thread is aimed at specifically uploading .hex files. If there’s ever a thread on performing command line magic though, that’ll be a good one to bring up.