What is this? A game system for ANTS? 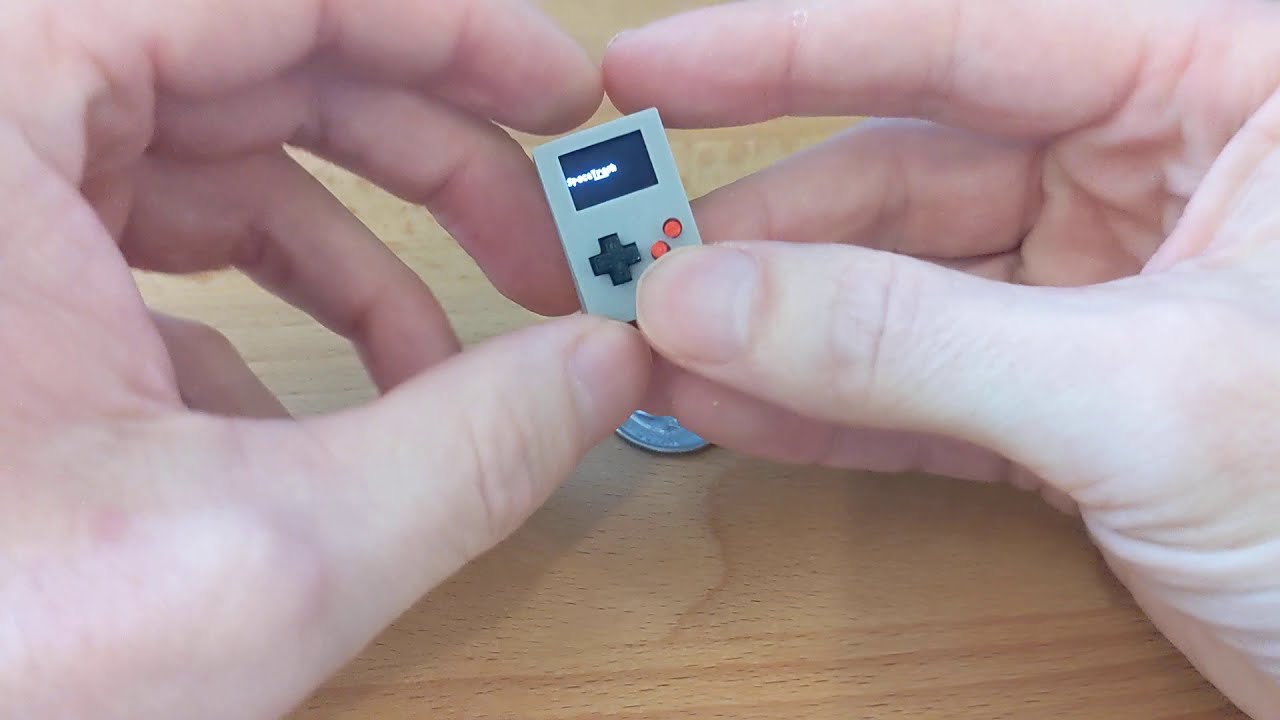 Welcome to the Arduboy Nano, a fully function mobile game system that’s smaller than an inch tall! (26mm for everyone else)

Featuring a 0.49" OLED display with 64x32 pixels, it is powered by the same ATmega 32u4 microcontroller that is used on the Arduboy. All of the pinouts remain the same, although the display uses i2c protocol and less pixels, all of the existing games are code compatible. Shrink down your favorite Arduboy game!

It has the smallest little 25mAh lithium polymer battery that will last a little more than an hour. Also a tiny 15mm piezo speaker, that due to it’s small size is very quiet.

Here are a couple shots of the first prototype:

Originally using the bare pcb to make contact with the USB, I opted for an actual connector for more robust connection.

The case is (obviously) 3d printed from 3 peices that slide together to complete the enclosure. The buttons were also painstakingly printed at 2mm/s in order to retain their delicate shape while printing.

A giant hat tip goes out to the folks over at Tiny Circuits. This design is entirely based on something that Ben Rose made and showed me at Maker Faire 5 years ago. I’ve been waiting for them to do something with it, but I couldn’t hold back any longer! The people must know!

The game is Space Trash, which is included as an example within the u8glib library. I loaded it up and “just worked” so that beat the heck out of me developing a whole game for this resolution just to show off the tech. I added beeps and fixed the button logic behavior, but funny enough it’s designed for Arduboy pinouts already!

Currently there are no plans to produce this but if it goes bananas online, I’ll consider finding someone to help me turn this into a real product. Keychain anyone?

p.s. I have a load of extra PCB’s if people would like to build for themselves, let me know and I can throw them up on the store for a few bucks. Probably send like 3 of them at a time, because shipping is a flat cost. Kinda expensive, but they were for me too being 4 layer 0.6mm with ENIG surface.

What do you think, viable platform?

how cute! I want one lol

This is really cool!
I indeed would be interested in buying a PCB (and show the result on my YouTube channel if you’re OK with that)

Oh yeah, this is open source, it’s based off Arduboy so it’s not a big stretch but toss this up here for folks playing along at home:

Ok I’ll put up the PCB for sale tomorrow. 3 for $5. Will come with a bill of materials so you can get the parts.

To be clear, it’s unassembled, so, you’ll have to make it yourself.

Damn, I just realized I probably have to sell them with a solder paste stencil too cuz hand soldering this would suck / nearly impossible. Ok I guess I’ll have to like see how many orders I get over 2 weeks, order enough stencils and then send them all out together.

So cool! you now need a resin printer! this would be amazing at that quality

I actually need one kit now to make a keychain, can you include a screen? (or will the gerber file be publish?)

This is amazing, really well done!
I would like to purchase a board or more if you still have some available…

Amazing! Would love to buy some to build. I enjoy making handhelds smaller than their corresponding device’s cartridges.

A similar project I made was putting a pockesprite into a GBC timeboy keychain. Or designing Cartboy, but let’s not wake that guy up.

I’m in! I also saw the unit Ben made all those years ago! I have a sla printer and have a metal casting setup. If I can get the print files from you, a would be more than happy to make some durable metal cases for the unit

makes for a much more durable keychain

Gerbers will not be released sorry. You’ll have to buy the pcb. If the gerbers get published it’s too easy for it to get stolen and I still have a chance to do more with this.

I will release the STL files shortly.

I’m delaying putting it on the store until I buy more stencils, I don’t want to have this end up in backorder hell like the FX.

I would love to buy some boards to make a keychain for myself and a couple earings for the wife. Would be cool if you were able to package it as a kit project and take advantage of bulk pricing.

Any estimates on how much it might cost total for all the parts?

Hey - This is absolutely incredible. I keep a museum of handhelds (Almost 350 unique consoles strong) - I would love to build this and add one. Please could you email me when you have them available for sale

I keep a museum of handhelds (Almost 350 unique consoles strong)

I would love to see that! Is your museum online anywhere?

Hey - I was running a youtube channel they has been asleep for a couple of years but is here: www.youtube.com/pocketlegion and is actually restarting in a couple of weeks with a Pocket Vectrex!

Any estimates on how much it might cost total for all the parts?

No way am I kitting this, sorting through making sure everyone got the correct quantity of 0204 parts, no thanks.

Like I said I’ll make the BOM available, maybe I can publish it in such a way it’s a complete order from digikey/mouser/farnell.

maybe I can publish it in such a way it’s a complete order from digikey/mouser/farnell.

That would definitely be cool.

Yeah, didn’t quite think that through

. I’m quite certain the price would at least double, if not triple, if you had to hand count that many pieces

I think that if you’re sending 0204 parts, you just send a reel with at least 2x as many… added cost is smaller than the overhead of losing those with a sneeze.

Once this is available the wife is super excited for me to make a couple of these as earrings. Will have to mod the case ever so slightly to add a ring older but that’s super easy to do.