can hardly contain my giddiness, 3-9 days of torture ensue

quick question can you link thease things for multiplayer?

Not that I know of being done, although seeing as they do Serial IO there is no reason you couldn’t hook a bunch up to a computer and have it work like a game server. Direct Arduboy to Arduboy might not be possible, but some of the library implementors can probably shed more light on it.

I made my Artillery game two player, but that is just desgined to have your arduboy passed back and forth

to be honest i purchanced this mostly for the nostalgia aaaaaaand to make a pokemon like game, (wich people are already working on, cant wait to throw my ideas/codes into the pot

There is a great niche for an accessory made out of a nano or something similar, powered by a small battery, that just shuffles Serial IO back and forth.

I’d love to work on it, but i’ve already bitten off more than I can chew with my current project XD

made out of a nano or something similar

An Arduino Nano can’t be used because it can’t act as a USB host.

A Raspberry Pi is likely the best candidate. You could also use it to upload new sketches and even do some programming by running the Arduino IDE on it.

A Teensy can act as a USB host.

There is a great niche for an accessory made out of a nano or something similar, powered by a small battery, that just shuffles Serial IO back and forth.

I’d love to work on it, but i’ve already bitten off more than I can chew with my current project XD

I bought one of these a long while back with the same idea in mind, because it had an SD Card on board and can do USB Host: 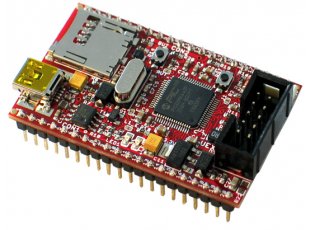 But have yet to find the time to even start experimenting with it… the problem then becomes having to add in a battery and charging circuit to make the thing portable, I don’t think you can suck power out of the Arduboy’s USB port?

By the time you’ve finished it could make more sense to just use your smart phone for this purpose instead!

like now im tired of waiting for my arduboy to come in the mail, so i hooked up a 2 row 16 segment lcd to my arduino uno and linked some buttons to it

Your program is doing exactly as you asked it to. Remember that your code will be checking for key presses many thousands of times per second so even a quick push will result in your code detecting thousands of key presses unless you put a delay or debounce routine in the code.

ya i added a quarter second delay , for laughs im calling my project the curly 1.0 and the game for it curly quest