Maybe I should reorder them a bit? The problem I have is that you look at a puzzle and think ‘oh it has three or four gates, that makes it hard’ but then an alternative solution might only use one or two gates.

Has anyone (other than @Vampirics) picked the theme tune? Bass line from a classic ‘80s song …

And i thought „Hmmm, that sounds like DMX. How cool is that“… Damn

I was born 83 so i guess i was too young. All i remember from the 80s is Blue System, lol

This guy has been around since the 70s and was still recording until recently - he may still be recording although he is a joke now.

Is he (in-)famous for biting off a bats head?

Yesss! Watching that damn reality show back then pays off now

I have just release V0.94 - which has a sandbox feature. Just press B from the front splash screen.

I have also tested and documented the levels so I know they are all solvable.

Cool! And i thought you would not have time to work more on it

Right … plane was delayed going to Brisbane so managed a bit in the airport. Had to wait to I got to my hotel so I could fish the Arduboy out of my luggage to test the remainder.

This is so nice! my favourite kind of game, similar to the one @Pharap did with the programming rabbit.

The incredible machine was one of my most beloved games

(and Logix captures some of that essence)

this is really great! I really like the use of the light. I’ve been wanting to include a similar feature like that in my game… Also, I like how the UI is reminiscent of retro OS.

Now would you mind if I got very critical? I’m gonna put it in a spoiler.

Obviously because this game is working on speeding up understanding of logic gates it would be nice to eliminate or shorten all bottlenecks to playing the game.

These are all great ideas … in the time frame of the Jam I didn’t have time to do much else. To compound the problem, I had to travel interstate so I lost a day or so!

The second and third suggestions are good ones and I think I can easily incorporate that. I will do that after the voting is complete. You may have noticed that I left it at version V0.94 giving me plenty of headroom to incorporate changes such as this.

Have you used the B key from the front menu to enter the ‘sandbox’? You could help me expand the game by designing some levels there.

you can use double wheels, all while holding the A button. in other words. hold A button, choose the different inputs/outputs on a wheel (like 2-3 choices). Then when the directional buttons are released (but not A) then switch to choosing the wiring options.
input/output selection will now be a permanent first step in the process but at least the user can pick the right input/output on the first try, then release, and then move on to how far the wiring will go, etc…

edit: i realize that maybe double wheels isn’t the right phrasing. i mean you can have 2 part wheel for A.

Just in case you don’t know what the ‘wheel’ thing that @WrinklyWink mentions is, they’re also known as radial menus or pie menus.
Here’s an example of a variant used by Legend Of Zelda Skyward Sword: And here’s one used in Lego Worlds: 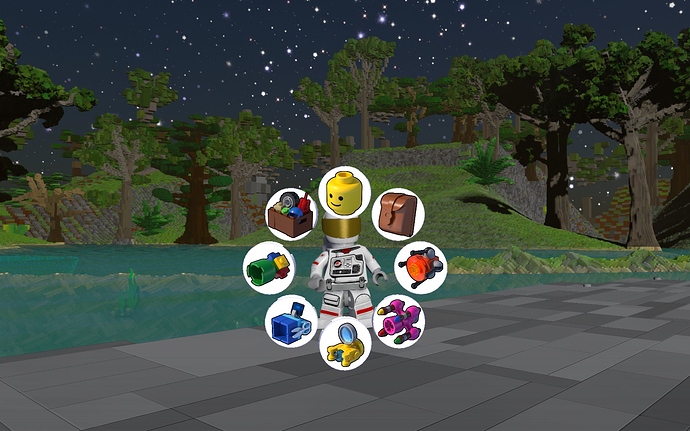 (For the record, I’ve played both of these.)

It’s doable, but I think the easiest way would be to detect on press rather than on release and it could get messy.
Usually it’s done with joysticks rather than dpads because it’s so much easier to do with joysticks (take the X and Y components and then use the vector dot product to figure out which option should be selected).

Essentially I think it’s a good idea as a mechanic, but I’m not sure it’s suited to the way Logix is currently set up.

Are you making a sand box with these mechanics?

It seems @filmote’s already incorporated a sort of sandbox mode:

Have you used the B key from the front menu to enter the ‘sandbox’?