Recently started using generic “3rd Generation” magnetic USB cables from amazon and find they really work will with the Arduboy to keep my misc devices charged at home on rotation and with Arduboy Mate for quick updates on the road.

These have 2 parts, a small micro-usb magnetic sliver that slots into the Arduboy (or other gadgets, originally bought them for Sphero R2-D2 so the little ones wouldn’t break anything plugging it it) and a magnetic USB cable that mates with this.

FWIW, I’ve mixed and matched a few different brands, they do differ in magnet strength but are generally all the same

Obligatory: Pics or it didn’t happen!

There is a nice, gratifying, snap when it connects. Hard to explain until you’ve tried it.

This is the particular one I started with, but i’ve mixed it with netdots and other more generic ones 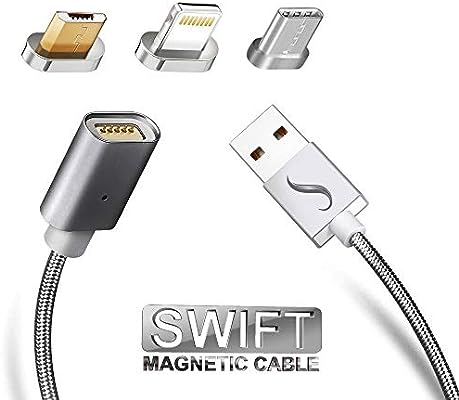 And the obligatory pics:

No photoshopped images either or it didn’t happen.

Just kidding, I’ve thought about these since they came out and as much as I like them the magnet puts me off. Same as the magnetic car holders it just feels wrong to expose my stuff to magnetism.

it just feels wrong to expose my stuff to magnetism.

There’s nothing in an Arduboy that’s sensitive to magnetism (at least at reasonable levels).

I’m reasonably confident that the whole “don’t expose electronics to magnets” thing is mostly because of hard drives (which will mess up if put in proximity to a magnet, though I think they’ve got more magnet-resistant casings these days).
Though I have seen a video of a strong magnet (ridiculously strong magnet that the general public would struggle to get hold of) being used to upset the electron beam of a CRT (the computer itself survived, it just lost a bunch of files because of the effect on the HDD).

For what it’s worth, speakers and headphones actually contain magnets. They work by using the magnet to vibrate a material (not sure what you’d call it, a plastic film?) and that’s what actually generates the sound. Microphones do pretty much the same in reverse.

I actually took an old bird-shaped coat hangar and gorilla-glued some magnets salvaged from a bunch of old, broken earphones to give it a new life as a fridge magnet.

Aparently there’s a very slight chance that magnets can generate enough charge to damage circuits, but it would probably need to be a particularly strong magnet.

Long story short: don’t worry too much, the manufacturers would have vetted it and it would take an especially powerful magnet to do damage.

upset the electron beam of a CRT

Being from the era of VHS and cassette tapes It was drummed into us magnet bad blue tac good.
When I was a kid we had huge non-magnetically shielded stereo speakers that would send the CRT insane when too close we would warp the screen for fun.

Going a bit off topic but my dad told us shining a torch at a CRT would cause it to explode.
His plan to make us less annoying failed curiosity
prevailed and the screen got blasted on a regular basis.