Map from an array

Hello everybody! I continue my struggle with arrays. I want to learn how to create a map from an array with which you can interact. Took advantage of the excellent tutorial from @crait but it doesn’t explain wall collisions. I tried to implement it, but unfortunately without success. Tell me what the problem might be? And is there a more optimal method, provided that in the future the card will move with the character. Links will help a lot too!

To prepare your levels, you can use:

You could make a special function too to know if a tile Type is solid or not. Then you draw your world and you can test if a tile is solid when required. You will just have to define a property for each tile types.

Atém you check each time you draw the world all sort of collision. You could only test collisions possibles: For exemple: when you move right, you could check if you collide with a block at the right or if you have no more block under feet then you fall until you reach bottom or a solid block… same with left… when you jump or a solid block stop you or you jump upper than it and then are stopped when you go down after.

I want to learn how to create a map from an array with which you can interact.

Conceptually, the idea of making something ‘solid’ in a virtual world actually means preventing an entity in the world from entering the area of space designated as ‘solid’.

In other words, solidness is actually about preventing movement, which means you should be checking for collisions only when you attempt to move an entity (e.g. your player’s character).

At the moment you appear to be trying to mix the collision checking with the rendering code, which isn’t a good idea even if it worked.

I believe in your case tileWidth and tileHeight are both 8.

Note that for moving right and down you will have to check the right and bottom sides of the character sprite, which means including the character’s width and height in your calculations.

Links will help a lot too!

You may want to take a look at this: 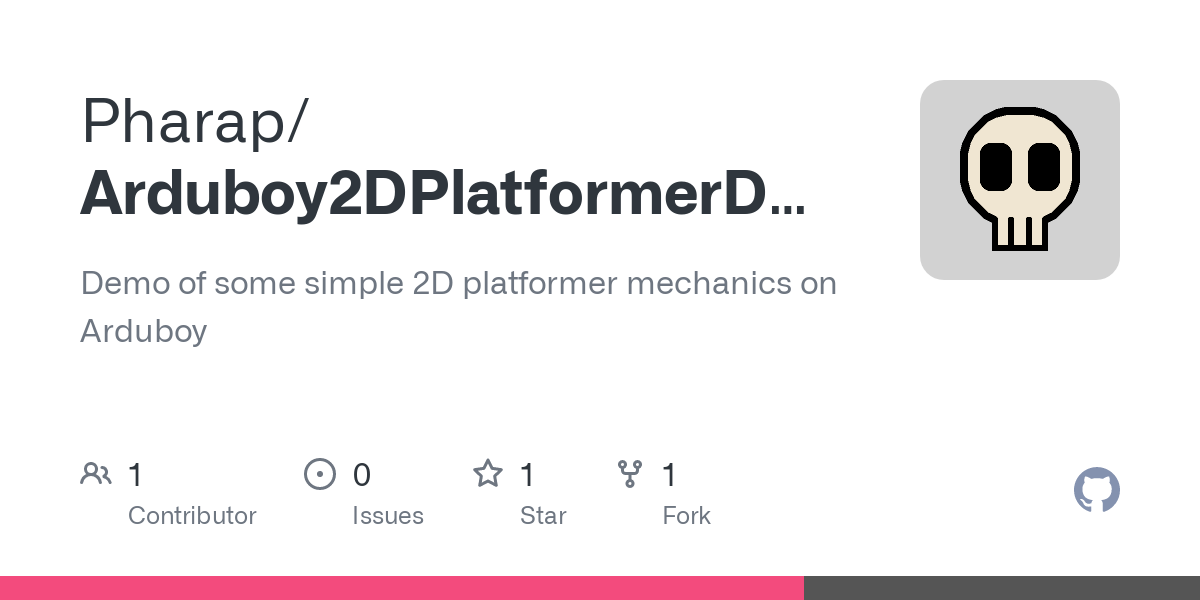 Demo of some simple 2D platformer mechanics on Arduboy

You might also want to look at the topic that lead to its creation:

How do you make a level? Help & Information

I’m trying to make a game with levels (like Super Mario Bros.) and I was wondering how I could make a level. I created a small map but I don’t know how I can make the player interact with tiles (for example, Mario jumps on top of a tile that’s higher that the normal ground level or he runs into a wall). Here’s a gif of what I’ve done so far: [ArduboyRecording%20(3)] If anyone wants to see the code, feel free to ask.

I would also advise using constexpr variables rather than #defines because #defines are old-fashioned, have various downsides and probably don’t work the way you expect them to work. E.g. instead of #define WORLD_WIDTH 16, using constexpr int worldWidth = 16; is better.

If you have any other questions or need any clarification, feel free to ask.

So yes it make line of your world larger

In terms of memory, it would actually make the world smaller because (on Arduboy) uint8_t is smaller than int.

@Pharap @Jean-Charles_Lebeau
Guys, thanks for the useful information! I will understand further

For the second day I have been trying to figure out the collision, but so far I have only been able to delve into the code that you offered me as an example. I used this method in my sketch ( Uploaded to GitHub), but the wall is solid only if the player is lower on the Y axis. The same thing happens on the X axis. I tried to create a condition, something like:

but that doesn’t work. In addition, the player in some places cannot move off the screen. Something prevents him from doing it. With what it can be connected?
I don’t understand why the solid world array seems so complicated to me. Apparently I was a bad student at school

I’ve suddenly realised that I didn’t quite give a complete answer last time, I ended up giving you half an answer. Exactly half, because I only told you how to check one corner when you need to check two…

The simplest way to fix the problem is to check both corners on a side to make sure that neither collide.

This time I have written the code out in full and properly tested it instead of providing half an answer. I’ve split it up into small steps using well-named variables to hopefully make it easier to understand.

! means ‘not’ and && means ‘and’, so if(!bottomLeftColliding && !bottomRightColliding) means “if not bottom left colliding and not bottom right colliding”.

I don’t understand why the solid world array seems so complicated to me.

Collision checking is fairly complicated in general.
A lot of the simpler solutions have bugs that make them break under certain conditions

It is fairly simple to test whether:

But to use that information to properly handle a collision can be tricky to get right.

The technique I have show you works fine for this example, but it has two other flaws:

You didn’t actually use the code snippet you posted in your code, but I feel I should point out that this:

is redundant. Assigning something to itself doesn’t do anything. It amounts to a command to “read A, then write that value back into A”.

At first glance, collision checking seemed so simple, but in fact it is a whole science

Thanks for the quick reply! The code works of course. This information will be more than enough for the near future…

And once again I want to clarify about the invisible blocks that do not allow you to go outside the map in some places. Is this all because random numbers from 1 to 0 are generated outside the map, or is there another reason?

but in fact it is a whole science

It’s actually geometry, and potentially a bit of physics depending on how realistic and ‘physics-y’ you want your world to be. :P

(If you want to be really ‘physics-y’, see Physix for an example of basic rigid-body physics.)

I want to clarify about the invisible blocks that do not allow you to go outside the map in some places. Is this all because random numbers from 1 to 0 are generated outside the map, or is there another reason?

That means if you try to read invalid coordinates, like world[-1][-1], instead of getting a valid map tile, you read some unrelated memory that you shouldn’t be reading.

So there are numbers beyond the map, but they aren’t necessarily 0 or 1. They aren’t random, but you wouldn’t be able to predict what they would be without knowing about how the compiler has chosen to put your variables into the computer’s memory.

If you are hoping to turn this code into a game, you should aim to do something similar.

E.g., create a function getTile that does such checking:

And use this instead of reading world directly.

You may find it interesting to know that actually a ‘2D’ array is really a 1D array with special coordinate mapping.

Oh, thanks for another food for thought! Indeed, all this is a combination of different sciences, the study of which can take forever, but it is a pleasant experience. Thanks again🙂

Hey! I have another question about the array map, but this time I wanted to ask about the inclusion of bonuses in the game. I think the easiest way to interact with them is through “Rect”, but no matter how hard I try, I cannot form an array out of them. Does it even make sense to use Rect for bonuses?

Does it even make sense to use Rect for bonuses?

Assuming by ‘bonuses’ you mean powerups (something the player can collide with to score points or gain abilities), then yes, you could represent several ‘bonuses’ with an array of rectangles specifying the area that the player has to collide with.

However, if your ‘bonuses’ are all the same size, you could halve the memory consumption by just storing a list of points instead, and only building the rectangles when you run the collision code.

but no matter how hard I try, I cannot form an array out of them.

However, you would also need a way to know which ‘bonuses’ are active. There’s at least half a dozen different ways you could do that.

Apparently I didn’t give enough information. I want to understand how to create the same two dimensional array that we discussed earlier. Only this time, I want to try doing it with “Rect”. In my opinion, this method is ideal for receiving bonuses as it is easier to manage. Maybe I’m wrong, correct me if that’s the case

I want to understand how to create the same two dimensional array that we discussed earlier. Only this time, I want to try doing it with “Rect”.

That seems a bit of an odd thing to want to do.
What are the rectangles supposed to represent?

More importantly, it will use quite a lot of memory (8 bytes per Rect, 8 * mapWidth * mapHeight bytes total). I suspect there’s a much ‘cheaper’ way to do what you’re trying to do.

but the compiler throws an error

I can’t help without more context. Ideally I’d need the error message and the code, but I can probably tell you what’s wrong from the error message if there’s some reason you don’t want to publish your code. (Though partial code would also be useful.)

More importantly, it will use quite a lot of memory

Absolutely - as most coordinates will be empty. Better to have a single dimension array and loop through then to see if you have collided with something.

However, if your ‘bonuses’ are all the same size, you could halve the memory consumption by just storing a list of points instead, and only building the rectangles when you run the collision code.

And build the rectangles as you loop through the array.

@Pharap @filmote
Unfortunately, I don’t have any code ready to show you, as these were just sketches that I immediately removed. The fact that using Rect would use more memory was sobering to me. This is a great reason not to use this method. Thanks for the clarification

The fact that using Rect would use more memory was sobering to me.

If you want to know how many bytes a type uses, you can use sizeof(type), e.g. arduboy.println(sizeof(Rect)).

I double-checked and Rect is actually 6 bytes, not 8 bytes. I’d forgotten the width and height are uint8_ts. (I’ve been doing more desktop programming recently.)

The type Rect is a struct (structure) with member variables x, y, width and height.

(In fact, I’m wondering if your compiler error was complaining that there wasn’t enough memory left…)

Thanks for the comprehensive answer! It is important for me that my gaps in game programming, in particular for the arduboy platform, are gradually filled with information. I can’t find enough time to create a complete game for every topic that interests me, so I have to sketch out to figure out how a particular method works. I think now I will stop deleting them🙂