Have you noticed that there’s an image floating around of a possible Pac Man Micro Arcade prototype? Found this on GameStop…

It looks like the prototype was based more heavily on the Tetris MicroCard’s design. Was this version ever released? Or was it a mockup / internal prototype only?

It was most probably a prototype or a mock-up.

And here’s the article I took the photo from: 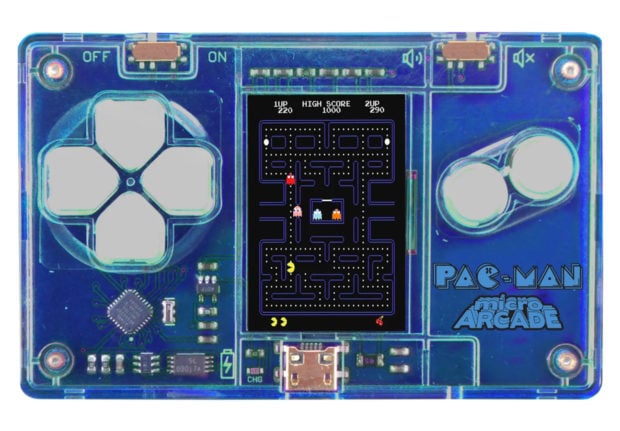 SuperImpulse MicroArcade Games Are The Size of a Credit Card

Super Impulse makes a Tiny Arcade line that is a series of four-inch-tall fully playable arcade cabinets. But how can you play these awesome old school

They took the MicroCard and photoshopped it and released a PR announcement before they actually built it. All without asking me, I could have done a better photoshop.

All without asking me

They didn’t consult me at all during the development despite me asking for it the whole time. I’ve mentioned it before but there are a couple simple changes that could be made to make it better than it is.

Are you able to comment on what those changes would be?

There’s space in the left lower corner for a better speaker, for one…

I dunno if there is actually eeprom storage on the device, but not having it save high scores is a crime in my mind. The simple change would be using softer button switches.

The speaker, is… ok it’s fine in my mind. I’d also do the PCB layout by hand so it looks nice instead of having some random engineer who probably doesn’t even know it will be visible or care. Even just as simple as where they put the artwork on the pcb for the title, they just pulled the copper in a rectangle around it, it just kind of looks… stamped on instead of part of the design.

Also I really wish their packaging was like mine, or at least doesn’t use so much plastic.

Yes they should have thought more about the polish of it, looks like they just slapped it together quickly, button too clicky, no way to save scores… On these old arcade games, scores is all that really matters. There’s even bugs in the games themselves too. Got some text printing issues on the Missile Command one… Really too bad as if they would have take the time to make it right I would be actually using it more. Now it just sits on a shelf.

You did set the bar high with the Arduboy

Pretty sure they just sent the Tetris MicroCard to their Contract Manufacturer in China and said “clone this” and called it a day. Also, thank you