Since the Attiny84 and Attiny841 are available in QFN, would their be any advantage to a version of the “mod chip” with additional peripheral such as hardware I2c/Serial? The pinout is slightly different than the 85 but integrating shouldn’t be a problem.

I’d say there could be. I had some ideas for adding an PSG so a few extra GPIO pins where necceccary to hook to the piezo. But for reason’s I can’t exactly remember I went for keep it simple and focused solely at it’s ISP function.

Arduboy communicates with the Attiny only by ISP mode so the extra GPIO isn’t very useful atm.

The Attiny ISP uses bitbanging SPI (couldn’t use hardware) so different pins could be used.

All the attiny does is reflash the bootloader, and the hardware SPI would only speed it up a little bit. Too late in the game to make a change that won’t really effect anything. Also, I’m guessing they are more expensive?

I wasn’t suggesting changing the current modchip. I was asking if a “modchip” with an upgraded processor would be of interest or useful.

Mod chip for the mod chip. I’m interested to see if anyone decided to do something interesting with the extra chip.

But no probably not.

I want to do something else with my life, the FX is the cherry on top. Nintendo, Sony or Microsoft give me a job already.

Nintendo, Sony or Microsoft give me a job already.

I already worked for a Danish company, Vestas and actually LEGO gave us a custom windmill set.

Disney is an option too, I was THIS close to getting a job there instead of actually starting Arduboy.

Nintendo, Sony or Microsoft give me a job already.

Wanna work for a bank?

I mean if the red tape and bureaucracy doesn’t kill you whats left is a lot of smart people who are passionate about the big data and tech it provides. Send help…

I’ll be the guy that they trust with all of the money, sure that sounds like a plan.

Disney is an option too, I was THIS close to getting a job there instead of actually starting Arduboy.

A friend worked for Disney (admittedly here in Australia) in promotions and regularly flew to the states. According to her, they are not a good employer and consider their staff expendable. I have two other friends (a couple) who work for Nike and say the same.

Yeah I got a similar vibe. But still, would be a serious experience, and what a thing to put on a resume. I ended up flunking out at my 5th interview with a VP of imagineering when, in so many words, he asked me to jump and I failed to ask how high.

That’s exactly why they can churn staff - there are lots of young people wanting to pad out their resume with a ‘name’ brand.

Microsoft also isn’t that great to work for.

Unless you were one of the early ones. Besides they don’t employee new people anymore, I though it was ll done through agencies and you cannot say you work for MS.

The terrible v- email while working on a support case at older jobs. Took forever to escalate to an actual engineer.

Their office 365 support and licensing go through resellers like Ingram or Microsoft shops in your area.

Vote to change thread title to “Rant about working at a big company and how they don’t appreciate people”.

I think the off topic needs and off topic. :P

I’m genuinely tempted to do a second split if we can’t get the show back on the road.

Unfortunately I don’t fully understand the original proposal so I can’t really add much to it.

I suppose technically a more powerful chip could function a bit like a coprocessor, but it would probably be a bit difficult to control, and naturally there would be extra battery drain.

Well to bring it back a bit on topic.

I’ve been playing with the idea to add the newer atmega 4808/9. But then the Atmega32u4 would be the mod chip or more like a luxury USB bridge

A bit like the original Tetris Micro Card was supposed to be.

Unfortunately I don’t fully understand the original proposal so I can’t really add much to it.

The current Attiny85 on the “FX daughterboard” is a 20-QFN package.
The pad layout looks likes this. 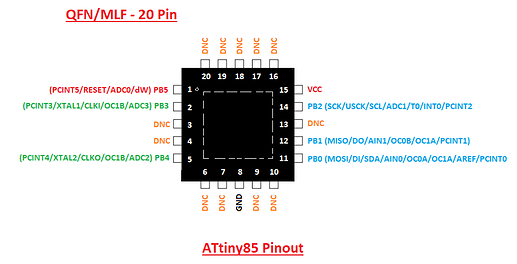 There are other ATtiny’s available in this package, specifically the Attiny84 and Attiny841 which have more I/O available as well as hardware I2C/Uarts etc. These chips are almost a drop in swap to the ATtiny85 save having to reroute a couple traces as there are slight differences in the pin outs.

The advantage of the “upgraded” chip? It might open more doors as to alternate uses of the “FX daughterboard”. Example being that chips can be configured as a I2C s̶l̶a̶v̶e̶ secondary processor that the 32u4 could access. The additional UARTS might be a benefit as well.

Also as @Mr.Blinky mentioned there are newer Atmel chips in similar packing which could be used with more memory/speed etc. The 32U4 would then be used to solely scan for key presses communicating them over I2C and act as a USB to UART bridge.