Anybody else receive theirs? If so, please post a picture.
Still chomping on the bit for mine

I’m still waiting on mine to arrive. My brother ordered at the same time I did, and received his over a week ago. Any updates on shipping?

Looking at the ‘tear down’, is there a plastic insert between the foil battery and the piezo speaker & wires? Aside from small risk of electrical shorting, it’s more whether a misplaced blob of solder could puncture / rub away at the LiPo …?

No, there is nothing between

Usually, LiPos under 200 mAh have enough internal resistance so that they do not catch fire even they are short circuited. So I guess your Arduboy would just stop working if the battery was dramatically affected by some movements.

We have a QC check in the factory to make sure they place the solder in the right place. We do of course appreciate when we get feedback from our customers on these things it’s the only way we can catch everything because I can’t inspect every single one myself… but you can!

Has anyone else received theirs yet??

I haven’t got mine yet but I wasn’t a kickstarter backer. I think they said new batches going out this month? Fingers crossed!

really great pictures. pre-ordered a blue one, wish I didnt miss the ks, really hate that!

I was a KS backer, but just barely!

There has been no word as to when the rest will ship out. I’ll post some pictures on this thread when it does.

I haven’t got mine yet. I got the buddy pack through Kickstarter in April… I don’t mind waiting for it, it’s just getting me more excited about actually having it

We are cranking on it, factory goes into full scale production next week where we will be producing 8,000 units and shipping them out as soon as they are ready! Looks like April for most people, May perhaps due to shipping delays.

Hang in there, the international early bird and developer kits have shipped and started arriving. Tracking information going out today (it took forever for it to become active very sorry, learning as we go here!)

We are looking to stock units in the USA so we can ship those directly in the future, potentially distribution center in europe as well but depends on how fast we grow as a company! Thank you so much for your patience! Making a kickstarter update today or tomorrow.

backer number 1,858, but i’m in canada, so chances are i won’t be seeing mine for a while. would REALLY make the dev process a lot easier that’s for sure though

Is there a way to tell what number we are as preorders?

You can view your backer number on the kickstarter page, under the blue “View pledge” button 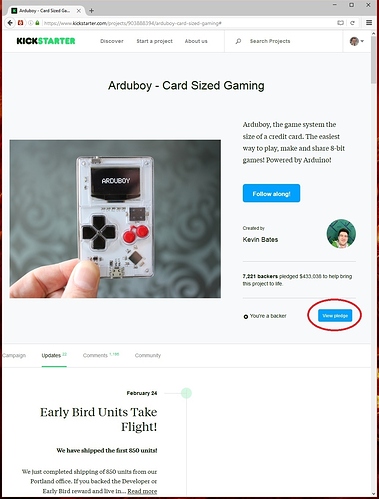 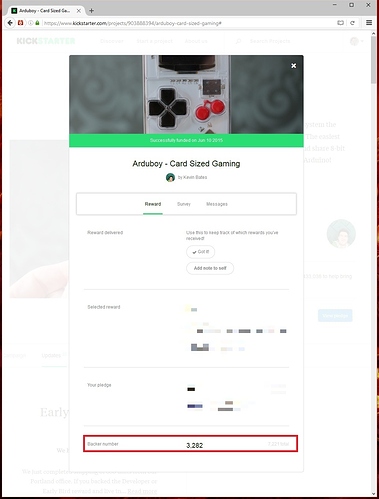 What about as preorder, not backsrs

I had a mail that told me mine was shipping (international early bird) but that was it. No tracking, no item.

Your Arduboy is ready to ship! We wanted to give you one last chance to update your shipping information.

We will ship Monday, February 29th.

What do I do? Other than wait…