So.... probably not shipping to the UK any more? Go ahead and eat balls Brexit. https://t.co/ELq9tK9RIP

Brexit wants me to register a UK VAT and collect taxes for the empire. I'm sorry we already did a war for this, I'm out. Buy Arduboy from @Pimoroni. https://t.co/aRSNTVPTZp 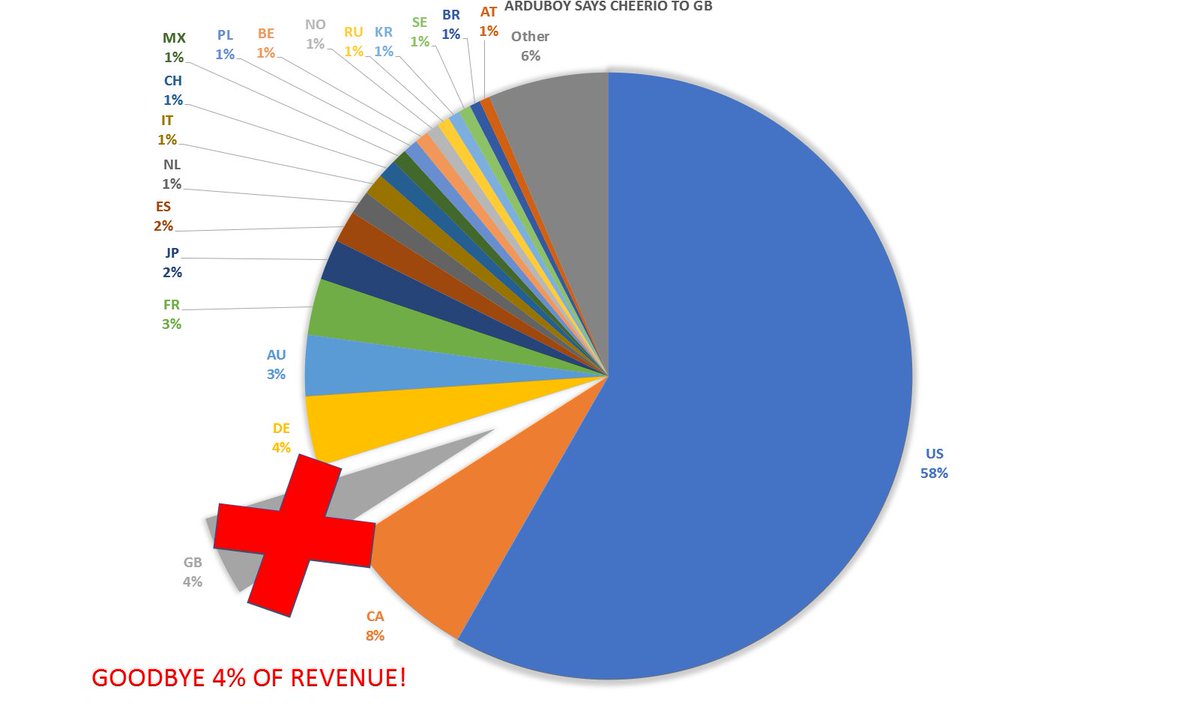 So all this nationalism is making small business more tough. UK wants me to collect 20% VAT at the time of purchase then hold onto that money for up to 3 months and then go through their process of remitting the taxes back.

This, unfortunately, is not worth it for 4% of the stores online revenue, so shortly I’ll be disabling shipping to the UK.

You’re encouraged to buy from www.pimoroni.com or maybe Farnell instead.

Here in NO they decided to do the same months ago

but they were going to charge the fees for not declaring VAT to the final recipient (so if you ordered let say a chocolate which was 10 kr from SE, final invoice was 10 kr + 25% + 150 kr). I think there was a lot of complains, so at the end they just added an automatic 25% to all the stores not collecting the VAT at the time of purchase… which you pay at the post office.

Slowly most of the stores implemented the VAT collection when paying

I assume UK has a much stronger store network so they can easily survive with their co.uk versions. I know it is fair for local sellers, but a lot of stuff is not really sold internally so it harms a lot of niche hobbies.

I’m looking into it deeper, it may just be worded in such a way to scare you into collecting it.

It seems like that it will just be more likely to get held at the post office or returned. But frankly I’ve been having a hell of a time with royal mail not actually notifying people that it was in customs.

I haven’t read through everything yet, but for business-to-business sales the seller doesn’t have to charge VAT, the purchaser will be responisble for accounting for the VAT “by means of a reverse charge”, so selling to local resellers is easier than selling to non-business customers.
(Both parties still have to have a registered VAT number though, otherwise it doesn’t qualify as a business-to-business transaction and the rules are the same as for a business-to-non-business transaction.)

Possibly related: my last Arduboy order arrived in the UK 10 days ago but is stuck ‘in transit’ which is probably meaning held up at customs. I imagine all imports are getting slowed down with the complications from Brexit. Sigh…

I imagine all imports are getting slowed down with the complications from Brexit.

The thing is, it’s not just Brexit that’s messed up imports and exports, it’s the pandemic too.

The ports were struggling long before the actual agreement was even signed. Part of that was because a load of people decided to do last-minute bulk importing that clogged up the ports, and part of it was due to people ordering gifts online either to avoid using the highstreet or because they actually couldn’t use the highstreet (I expect Amazon’s profits have soared this year).

Those factors were causing congestion even before the new rules came into play, so when the rules finally did come into effect it was far worse than it might have otherwise been. (It was never going to be smooth sailing of course, but events conspired nonetheless.)

(There was the 48 hour Calais border fiasco as well, but I doubt that had much effect on Arduboy imports.)

I’m not sure how much it differs (if at all), but I found this slightly easier to sift through and understand:

I was asked on twitter about existing orders to the UK:

I will be shipping out all out Arduboy FX orders to the UK, but I will not be collecting VAT or remitting to it. So it will rely on you watching your tracking number and working with the post office to pay the VAT yourself.

If for some reason it gets returned to sender I’ll refund the order.

If you’d rather avoid the hassle all together and wait until Pimoroni gets it in stock, just let me know and I can cancel the order.