@Roo Can you open it up and check what is the voltage on the battery?

Can you open it up and check what is the voltage on the battery?

I’ve measured and reported on this a few times in this thread.

Today the battery measured 2.773V. I took the measurement with the case removed, and the battery still installed (probes on the battery tabs).

Well, I did the scary thing and hooked the battery directly up to 5V for about 30 seconds. It was reading 3.6V while taking this charge as best I could tell. The battery itself felt cool (but we’re talking a very short time)

I removed the power and measured the battery in place, still sitting around 3.6V - and the Arduboy now powers on normally. I’ve got it charging normally now via USB.

While connected via USB to charge, I’m only reading 3.6V. (so identical to when it is disconnected from any power source)

However, at least this ‘broken’ one now has a battery level that is above 3.2V. It also turns on both with and without the USB cable for charging connected.

I guess at this point I’ll just leave it plugged in to charge for a while and see if the red led goes ‘off’ as it does with the ‘working’ one.

I’ve measured and reported on this a few times in this thread.

Oopsie, sorry got lost in the big thread.

Well, I did the scary thing and hooked the battery directly up to 5V for about 30 seconds.

if the voltage does not increase when “charging” (plugging in the usb cable) then actually the battery charger is what has failed.

That was the conclusion I was arriving at but I wanted to gather more evidence to support it. (edit: been an hour or so, charge is still stuck at same voltage - so yeah, I think the charge circuit is busted)

Where do we go from here? Is there a part I can swap out? 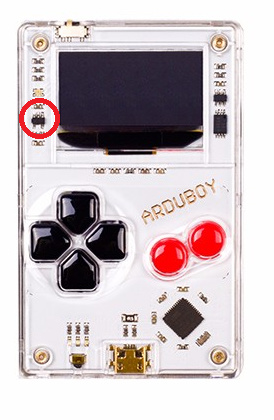 It’s an MCP73831, I’ve probably got a few floating around if you want I can send you one. But it’s really hard to replace a component with multiple pins if you’ve not done it before. Typically you’d want to use a heat gun but that will damage the OLED. It’s very similar repair to flipping the RGB LED which some users have attempted in the forum, so if you want to take it on take a look at that:

A friend of mine who has received his pair of kickstarter Arduboys (here in the UK) recently asked me if I could help him fix the RGB LED on both his Arduboys. I’m an electronic engineer and regularly have to solder surface mount components by hand, so I thought I would give it a go. After attempting to de-solder the existing RGB LED with just a fine-tipped soldering iron I managed to totally kill the LED (it was quite fragile at high temperature). So i decided the best approach was to scrap bo…

Since you’re not salvaging the part and just want to replace it’s possible to use a large tip and big blob of solder and flick the part off the pcb. Or cut the pins and remove one by one.

It could just be a bad/broken solder joint. You could try just adding some solder flux to the pins and reheat (reflow) the chip pins.

Edit:
You could try add some solder flux to the other parts of the charging circuit too. All parts (except the charging LED and current limiting resistor for it) are in the picture below:

So I found this datasheet https://cdn.sparkfun.com/assets/learn_tutorials/6/9/5/MCP738312.pdf 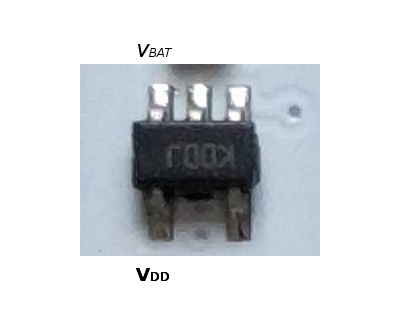 Which makes me think the key pins are Vbat and Vdd

But the battery (from the tabs) still measures 3.6V

Can someone shed some light on the circuit here? Or where I should chase the voltage? It looks to me like the charge management controller is working fine, but somewhere between it and the battery something has come loose.

Maybe there is a problem with R7, if all the solder joints look in good condition you might also check the resistance of R7 to see that it is 2K ohms.

So I see R7 in the circuit diagram, but I’m not sure which of the two resistors in the picture from the Arduboy are R7 (since there is also R12).

So a bad resistor between 1 and 2? I have an autoranging meter… but I’m clearly not skilled in this area.

Those are actually the capacitors, you’d want to measure the black one between 3 and 4. You’re actually doing great don’t put yourself down.

The voltage at the VBAT terminal and the battery tabs should be the same. I kind of wonder if the solder joint there is bad.

Those are actually the capacitors, you’d want to measure the black one between 3 and 4. You’re actually doing great don’t put yourself down.

The voltage at the VBAT terminal and the battery tabs should be the same. I kind of wonder if the solder joint there is bad.

Where do I go looking for a bad joint? I’m mostly good with soldering - even SMD parts don’t scare me. http://lowtek.ca/roo/2011/surface-mount-soldering-repair-harmony-659/

That’s so weird. What ground reference are you using in both places?

I’m guessing on the back you are testing between the positive and negative terminals of the battery. Find a ground pad elsewhere in the schematic that sits after the battery protection and test with that ground.

What ground reference are you using in both places?

Well, I had made the mistake you guessed at first – and I caught myself.

The most recent measurement was from

I’m going to take my working Arduboy apart and do the same measurements to see what’s up here. (and I can do a simple connectivity test too)

It’s not a mistake actually it kind of indicates the problem may be the battery ground is disconnected from the circuit ground, which is what the battery protection circuit does.

Try doing a continuity test from battery ground to the usb ground, try doing it both polarities (flip the + and - probes). If you can also test the resistance, both polarities. 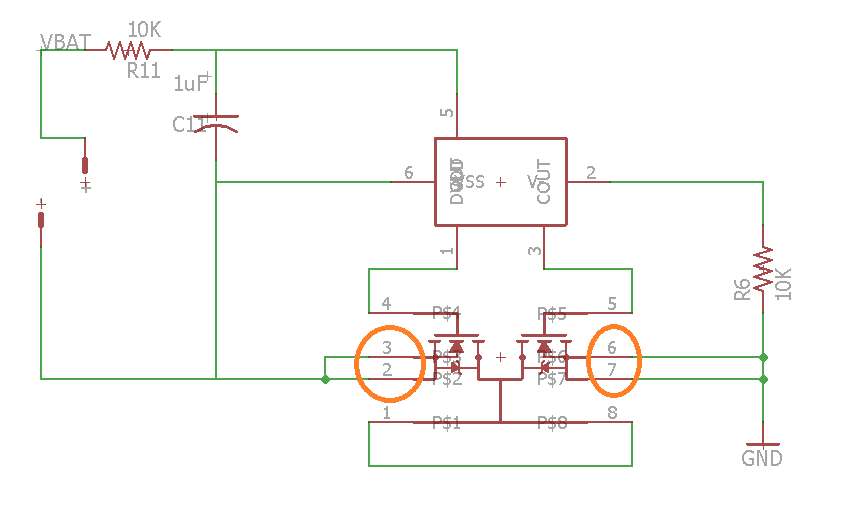 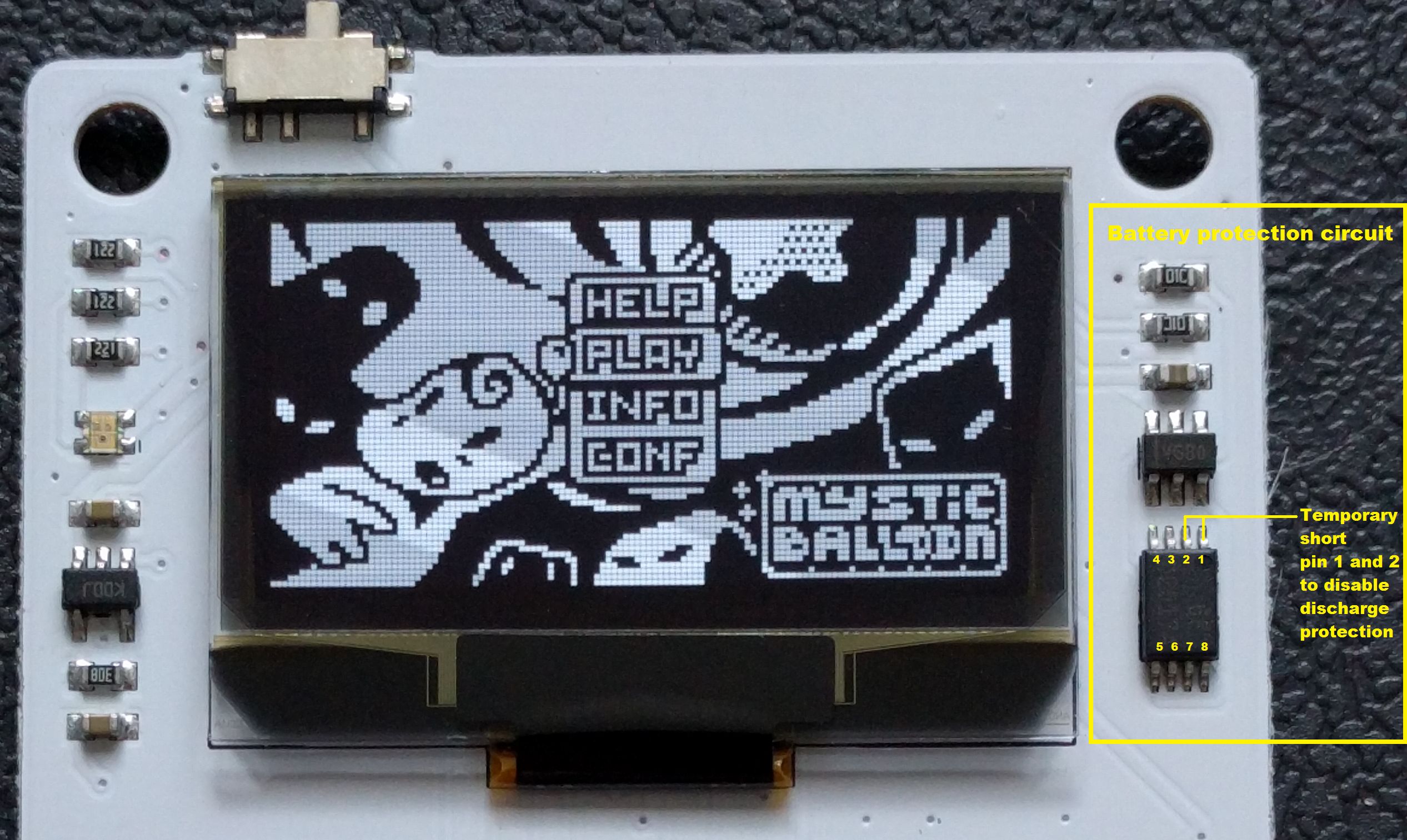 I think you will find that if you “disable discharge protection” this should give continuity to this signal. You may not have it otherwise.

Can you take a good high res picture of all these components and we can inspect for any bad solder joints? Sometimes the jellybean parts go bad so it could just be the battery protection chip. That would explain why it turns on with the pins shorted it turns on… but not why it wouldn’t charge.

The most recent measurement was from

This is odd. According to the schematic the battery + terminal is connected to Vbatt so you should get the same voltages. Where did you measure Vbatt?

Where did you measure Vbatt?

See my picture above

Try doing a continuity test from battery ground to the usb ground, try doing it both polarities (flip the + and - probes). If you can also test the resistance, both polarities.

For the tests against the following pins

Could someone confirm the pin outs for the MCP73831 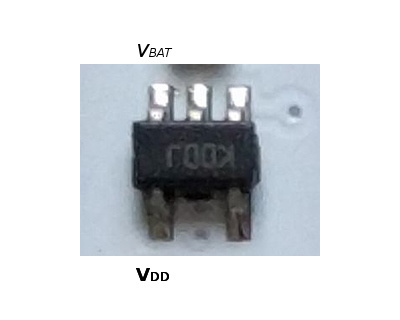