Just realized that you can use your Arduboy as a tuner for musical instruments. Example for ukulele:

It might be easier to use if you set it up to use the buttons to select notes, like so:

@Pharap your code removes the main feature of the original post - presenting the colour of the ukelele string being tuned via the LEDs. 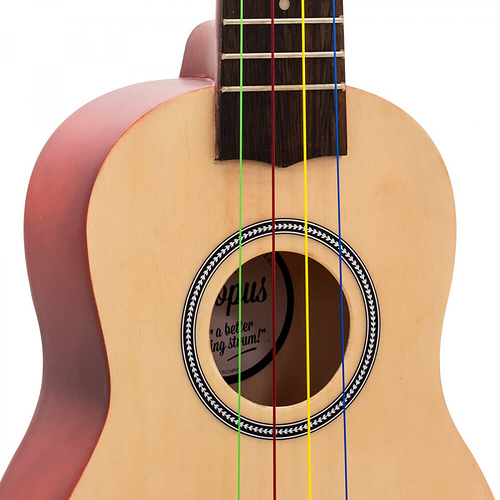 Can anyone give me a link with explanation when i need to use FlashStringHelper and when not? Meanwhile i rewrited the code:

presenting the colour of the ukelele string being tuned via the LEDs.

Fair point. Not sure how I overlooked those,
but I threw the code together in about 5-10 minutes so it’s hardly surprising.

At any rate I didn’t even know ukeleles have mult-coloured strings.
All I know about ukeleles is how to pronounce the name correctly.
(I very briefly dabbled in learning a bit of Hawaiian. Interesting language.)

Can anyone give me a link with explanation when i need to use FlashStringHelper and when not?

Unfortunately I don’t have one bookmarked so I’ll write another from scratch.

Basically the Arduboy uses an AVR chip, and AVR chips have three kinds of memory:

The flash string helper trick is a solution that the Arduino library writers came up with to tell the print functions when a string is in progmem.

(There’s actually a better solution than the flash string pointer trick that Arduino came up with,
but we’re kind of stuck with it now.)

Suprisingly not many people know about this, so it’s not uncommon to find people trying to dereference function pointers before calling them.

In a program your size, you really do not need FlashStringHelper.

@Pharap has included the four note names in an array and the helper allows him to retrieve them from that array in a format that print() expects. Edit: I see he and I responded at about the same time. Refer above for details!

Not sure how I overlooked those,

LOL … 4 of the 12 lines in loop are dedicated to LEDs so easy to miss.

I am not sure common colour strings are - probably just for kids versions of the Uke.