[SOLVED] I need to tweak the analog input ports

I need to redefine the A0 - A3 ports to analog inputs. I tried to just do

…at the end of setup() and the just do
a0 = analogRead(A0);
…but I only got zero from the port.
When I wrote a completely separate sketch (without the Arduboy library, just something for the Leonardo), I got perfect readings from the ports. I probably need to change something in the library to make this work with the rest of the Arduboy lib. Where exactly can I find the important routines for the button pins?
This video shows how it works. I have a 10k pullup resistor. And I have this conductive plastic foam pulling down. Since the RGB LED has a common anode, the catodes go to the PWM pins to sink the current. The harder press on the foam, the lower voltage on the analog pins, the brighter led. 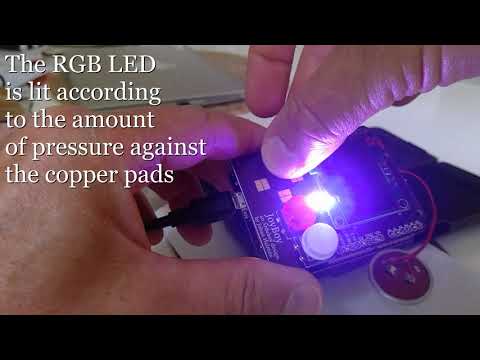 In pins_arduino.h I found this:

Just my two cents, but the begin() function from the Arduboy2 library will define those pins when called, so with that in mind, maybe you should make a similar begin() function, to be called after arduboy.begin(), so that no modification has to be made to the standard arduboy library, just a couple lines of code in the sketch itself. I did something similar when trying to implement a rotary encoder for my Pip-Boy32u4

That could work. But it seems the Arduboy lib is redefining what A0 points to, not only stating it’s digital. I’m not quite familiar with how pin names work, which names are “real” and which are macros or something else.

in your setup() code, try this order:

additionally, these pins have internal pullup resistors, so I’m not sure an external one is necessary. When I used a rotary encoder with my arduboy, I had to call each as a pullup in pinMode() before I could get the encoder to read properly. So if the above code block still isn’t reading (which is likely. I think it has something to do with how the arduboy lib manipulates the ports), try this one instead:

Analog pins can be used as normal digital inputs, which is how they are used in the Arduboy by default.

By being analog inputs just means that they support the analog input function. What this does is provide a 0 to 255 1023 integer relative to a 0 to 5v signal respectively.

When polled as a digital input, it returns a boolean 0 or 1 depending on if the voltage is over a certain threshold, I’m not sure exactly what it is though but I’m sure referencing the datasheet can tell you exactly.

Ah, then if I understand correctly, for this application you would just want to call it as INPUT not INPUT_PULLUP

Apparently it’s actually in the 0-1023 range because the ADC is actually 10 bits for some reason.
Some boards support up to 12 bits, but Leonardo is definitely referenced as being 10 bits wide.

I found the solution. Nothing to do with port manipulation or redefining A0 or other pin names.
Arduboy lib disables the ADC, which reads the analog value and converts it to 0 … 1023.

After arduboy.begin(); you have to call power_adc_enable(); to turn it on again.

After that you can use analogRead(A0);

arduboy.begin(); disables the ADC to save power. And probably to gain speed, too.

Thaks to this thread and to MLXXXpScott.