I want to program game and watch game straight from USSR wiki article: Wiki article for the game(sadly Russian only)(You can ask what wiki says I’ll translate it) :(. So anyway I want to make this game but I’m a noob at programming. So can someone please help me?

it was a USSR copy of the Nintendo Game&Watch series

it was unique technology of microchip copying of these games (as many others):
they cut layer after layer few atoms thickness of the microchip, making a photo of the layouts and thus reverse engineered them

it’s so strange that a country able to do best in the world submarines, rocket systems, spaceships could not be made its own kid games ))

here the description of Arduino reconstruction of this game


and here is the sketch

it’s better to rewrite it for Arduboy2 lib of course

i think there are no men in Russia today about 35-45 years, who don’t know about this “Electronica” game. everybody dreamed about it in his childhood ))

There is an English-language Wikipedia article about this.

Well, Just You Wait! (Russian: Ну, погоди!, tr. Nu, pogodi!, IPA: [ˈnu pəɡɐˈdʲi]) is a Soviet, later Russian, animated series produced by Soyuzmultfilm. The series debuted in 1969 and became popular in the Soviet Union and Eastern Bloc countries. In the 2014 all-Russian poll Well, Just You Wait! won by a wide margin as people's favorite cartoon/animated series of all time. The last episode was produced in 2006. The series follows the comical adventures of a mischievous yet artistic Wolf (Волк)...

And sure enough, in the video game section the LCD game is mentioned:

Nu, pogodi! has been adapted into a number of video games. In 1984, an LCD game titled Nu, pogodi! was released in the Soviet Union. Between 2002 and 2010, the Russian video game company SoftClub released five different PC games based on the cartoon series.

It claims the game is a clone of ‘Egg’:

Egg is a Game & Watch game that was released as a part of the Wide Screen series on October 9, 1981. Nintendo acquired a Disney license and simultaneously released a version of this game as the first Mickey Mouse Game & Watch game. The Egg...

These G&W games are relatively easy to implement on the Arduboy.

Have you looked at the tutorials on this site and worked through them? https://community.arduboy.com/c/education/lessons/41

They will not tell you how to make this game but if you understand how they work, you can then start building your own games. I recently created a version of Lion Tamer which shows one approach to making these sorts of games. Lion Tamer [Game Jam 5]

When you are done with the tutorials, start mocking up a game and people (including me) will be happy to jump in and help if they can see you are trying 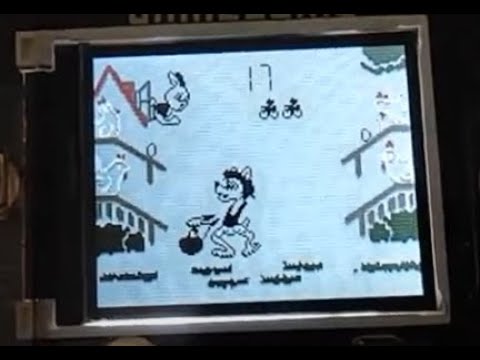