Based on the fact that the Elegoo manual shows the passive buzzer connected directly between a pin and ground, and also from the schematic symbol used, I’d say it’s probably a piezo buzzer. 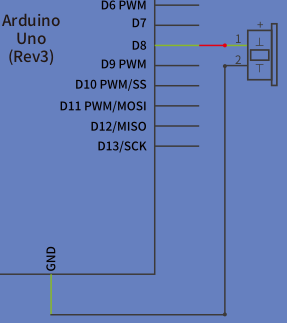 Yeah, I used it on my old diy Arduboy and it worked, but I’m still unsure.

Also, why are all the piezo buzzers I’m finding on Amazon active ones?

Are these the right ones I need? https://www.amazon.ca/Gikfun-Mainboard-Computer-Internal-Speaker/dp/B01LY5OP1E/ref=sr_1_1_sspa?dchild=1&keywords=passive+piezo+speaker&qid=1632612035&sr=8-1-spons&psc=1&spLa=ZW5jcnlwdGVkUXVhbGlmaWVyPUExTjRQUDM0WDJORjhPJmVuY3J5cHRlZElkPUEwMTUyMDE2MkJFRU1SQVczWVZTSyZlbmNyeXB0ZWRBZElkPUEwNjI0MTMyMzhLV1pUSks1MlQ3QiZ3aWRnZXROYW1lPXNwX2F0ZiZhY3Rpb249Y2xpY2tSZWRpcmVjdCZkb05vdExvZ0NsaWNrPXRydWU=

Are these the right ones I need?

I’ve always found that ones like that, designed for PC motherboard speakers, are voice coil type, not piezo.

If you want one like the Arduboy uses, search for piezo disc. However, these bare discs aren’t very loud unless you mount them to something that resonates. I use double sided tape to mount them to the cut off bottom of a single serving yogourt cup or something similar.

I’ve mentioned previously that I think it would be a good idea to base the next version of the Arduboy on the Arduino/Genuino Zero. This would give a good improvement on speed, flash and RAM while remaining compatible with a standard Arduino product, for ease of development. I bought a SparkFun SAMD21 Mini Breakout to experiment with. This product uses the same ATSAMD21G18 processor as the Zero and can use the same libraries in the Arduino IDE. Other than the processor, the system that I built …

Also, another thing, I found a tape called Kapton tape and it is a good non conductive tape for taping down circuit boards?

Also, I was testing the buzzer again and I think maybe (like 95% sure) that I was accidently touching the two spiky things because this time I got no recording (so it’s probably piezoelectric) and when I measured a resistor it recorded what it should have, so I think my buzzer is piezoelectric.

I found a tape called Kapton tape and it is a good non conductive tape for taping down circuit boards?

It depends on what you mean by “taping down”. Kapton tape is a very good insulator, which is why it’s used to isolate conductors in electrical equipment to prevent shorts. The yellow tape sealing the end and covering the circuit board in your LiPo battery is Kapton tape.

If by “taping down” you mean holding it in place, there may be something better for mechanical strength, if high insulation isn’t as important.

Okay, I tried it again and today I was still getting a number in the 1500’s. I am so confused.

What kind of tape do you suggest?

Almost any non-metallic tape will have a high enough resistance that it won’t cause problems with electronic circuitry. Use whatever you think will hold and last.

For something intended to be permanent, I would tend to try to find a mechanical way, like screws, wire, brackets, clips or solder.

Then you’re right, it doesn’t make sense. Can you post a photo showing your meter with the reading and the back of the buzzer with the meter leads attached?

I found another buzzer (I used it on my previous Arduboy) and this one has a green circuit board. They looked Identical.

I measured this one and I was getting somewhere in the hundreds and 40’s and 20’s and literaly where not. BUT it was beeping and the only time I’ve experienced my multimeter beeping before is when both spikes touch each other. However, when there wasn’t a beeping noise, it showed a number in the hundreds.

If you want one like the Arduboy uses, search for piezo disc. However, these bare discs aren’t very loud

Do I have to worry if it’s passive or active, or are they all the same? Also, will they be louder the bigger these discs get?

Bare discs are always passive. Generally, a larger disc will be capable of higher volume but at some point it will be limited by the amount of energy you can put into it. Again, the surface you mount it to will have a large effect on the volume (and frequency curve) you get.