This Afternoon I migrated Alojz Jakob’s [Tamaguino] to the Arduboy

Before posting code the project uses GNU GPLv3. I am unsure what the best practise is, can I just provide the code I want to keep with my changes in my own git master with licence and link to the original authors? or do I have to fork and include all original code?

I doubt OLED sleep will get you much savings (relative to the overall system power), than just setting all pixels off would, but its easy to do since there are already Arduboy2 library functions to do it.

As you are probably aware, improved power saving for this sort of thing has been discussed here:

The processor can be put into Power-Down mode, which can be woken up by an interrupt generated by a button press. There aren’t any library functions to do this but it’s not too difficult. The display can be put into sleep mode. There are functions displayOn() and displayOff() in the Arduboy2 library to do this. With both the processor powered down and the display sleeping, I estimate the unit would draw about 5uA. With a fully charged battery, the Arduboy could “sleep” for about 4 years (but …

Glad to see you managed to cut “10 months” down substantially. :P

the project uses GNU GPLv3. I am unsure what the best practise is, can I just provide the code I want to keep with my changes in my own git master with licence and link to the original authors? or do I have to fork and include all original code?

According to https://choosealicense.com/licenses/gpl-3.0/ the GPLv3 requires that you:

(The last of those conditions being why it’s sometimes considered to be a controversial licence.)

Glad to see you managed to cut “10 months” down substantially. :P

SNIP (The last of those conditions being why it’s sometimes considered to be a controversial licence.)

I love how making my own $12 Arduboy and playing around with the D&U code made it so much easier to figure out what was what.

This is so cool. I am a huge fan of tamagotchi! This is one of the best things I’ve downloaded for my Arduboy!

I found mine a while back. It needs new batteries. 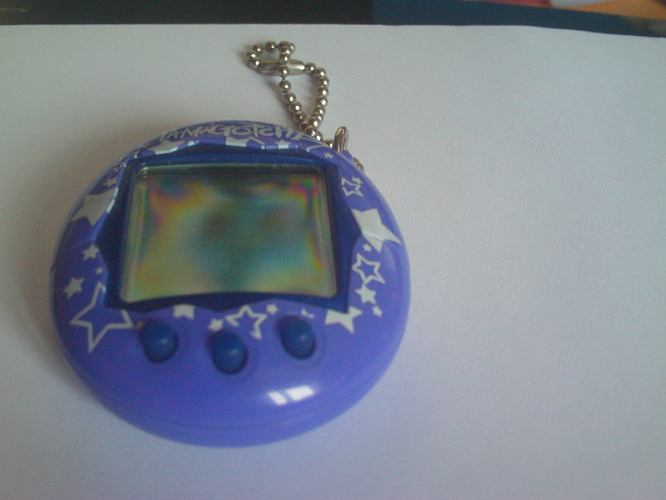 Thanks I have added displayOn/Off with button combos.

This is so cool. I am a huge fan of tamagotchi! This is one of the best things I’ve downloaded for my Arduboy!

Thank you, I’m glad someone is enjoying it.
If you really want to show your appreciation there’s a “buy me a coffee” button on the original authors site (link in first post).

Great effort Scott. How much work was involved in the migration?

Initially replacing WIRE.h and SPI.h with the Arduboy2 library + adding arduboy. to most and changing the pins to correspond with my pro micro clone was pretty much enough to get it running with garbled graphics.

I had to convert of the images with Team a.r.g’s tool and remove the width+height to fix the image display issues.

All the Button pin stuff now removed to use arduboy.pressed()

I am able to put the system into PWR_DOWN and wake with the watchdog timer. But am struggling to figure out the interrupt using a button.

Looking at the watchdog timer it looks like I would have to wake every 8 seconds and increase a counter to extend sleep time and finally using an interrupt to wake and trigger events.

I thought I put a button on the same as a hardware interrupt pin but it looks like I gave that up for having a better bitmask for reading the buttons. Sorry!

Also on the Arduino board reference (at the bottom) pin 7 = INT.4 where on leonardo boards it is labelled as PE6 (INT.6/AIN0)(1) https://www.arduino.cc/en/Hacking/PinMapping32u4

At my suggestion, you did. The A button is on INT6 (PE6, Arduino Pin 7), which is directly supported as an Arduino interrupt.

The B button can also generate an interrupt : PCINT4 (PB4, Arduino Pin 8).

Yep the 1% of it not being me went out the window.
Right now I can sleep or wake and am slowly joining the dots to wake and sleep.

to clear up where I was being confused with the labels

I still have no idea what the INT.6 label is all about…?

Highly likely my code needs a some work but I got it working.

Next up is extending the watchdog timer beyond 8 seconds…