The Reset Dance: How to fix your Arduboy no matter what

The Reset Dance is a simple and fun routine you can perform to recover any Arduboy that has problems uploading. Perform the dance in order, as some of them to the end are more dangerous and can damage the Arduboy so should be considered only in the method of last result.

Flashlight mode will work for your Arduboy if plugging it into USB still gives you a detection chime and attempting an upload resets the device but it will not program. This is a symptom of an application that includes the USB stack but the program is disturbing a memory address in RAM needed for the bootloader to function. Flashlight mode holds the Arduboy in a loop that prevents the game code from running.

Holding the down button is used on games that remove the USB code from the main sketch, and thus do not show up as a serial connection to the PC. The Arduboy cannot be reset by the USB method and so by holding down, the sketch actually just resets the Arduboy to the bootloader repeatedly. This is why the timing is important as most applications have a specific window where it will attempt to upload and this has to match the reset window of the Arduboy.

The only circumstance that should require the reset button is a corrupted bootloader, or a very poorly written application that removes the USB code but also does not provide one of the approved methods for recovery. Be careful, the reset button can be damaged by excess force.

If you have authored a game or are otherwise aware of a need to have a special reset procedure and it is not already listed above, please comment below. If you are having a problem using this guide please search the forums first for your specific issue and then make a new post if you cannot find one.

Turn on the Arduboy while holding the UP button to enter flashlight mode.

Not all sketches include flashlight mode. Developers trying to get more program space will use boot() instead of begin() and leave out a call to the flashlight function.

Some sketches that use boot() will include safe mode (by calling safeMode()), since it uses slightly less program space than flashlight. Safe mode works the same as flashlight except the RGB LED lights red instead of white and the display stays off instead of turning all pixels on.

Some sketches don’t include flashlight or safe mode. If one of these encounters the “magic key” bootloader problem, using the reset button may be the only resort.

if plugging it into USB still gives you a detection chime

(At least some) Linux distributions don’t make a sound when a USB device is plugged in and detected. I don’t know what Macs do.

I don’t know what Macs do.

No sound, it just shows up in Finder (hopefully!).

@MLXXXp everything you say is true! The Reset Dance is intended for non technical users to have a catch-all procedure for trying to figure out how to reprogram their Arduboy. It is true some games will not have flashlight mode, others will not have the down button reset, but it’s a good procedure to try anyways. I hope to compile a list of the games that require each method and list them in the first post soon.

A list of games 100% requiring flashlight mode won’t be achievable or will be very short.

TL;DR: Any changes made to a sketch, or its dependencies, or build environment could cause the problem to start happening or disappear, and what the sketch is doing when a new upload is attempted could also have an effect. Therefore, it would be a list of sketches where flashlight mode helped at some point but it won’t necessarily still or always be required for one listed. Some versions of sketches in the list will never have a problem and some sketches that infrequently experience the problem won’t be in the list. (This is unlike sketches that have USB removed, which will always require a special procedure.)

Howdy! I hope you’re still checking this community board.

I just picked up my Arduboy after a year or so, and I cannot get any new games loaded.

The last I was using it, I created my own game using this guide:

THIS TUTORIAL IS OUT OF DATE! Please check out the UPDATED version, here: Make Your Own Arduboy Game: Part 6 - Graphics!

The last game I created is still there & is running as it should. However, if I try to put anything new on it, I get this error:

Couldn’t find a Board on the selected port. Check that you have the correct port selected. If it is correct, try pressing the board’s reset button after initiating the upload.

I’ve tried all of the methods outlined above, but nothing works.

As you likely expect, I do not get a USB “chime” when I plug it in, nor are there any Port choices for me within Arduino IDE.

Any help would be greatly appreciated!

Have you tried swapping out for a different USB cable?

I’ve had 2 usb cables die on my recently

Thanks for the suggestion, but I don’t think that’s it. The red charging light comes on when I plug it in. Also, when I hit “Upload”, the screen of my Arduboy changes, like it’s trying to do something.

The red charging light will come on if it has power, but if it’s not getting data then it won’t program.

Can you confirm the usb cable you are using can transfer data to other devices like an external hard drive or something like that?

If you plug it in and don’t get the green light to flash once, and don’t hear the usb chime then you aren’t getting a data connection. So, theoretically the screen shouldn’t react to the programming step.

Unfortunately, as you may notice you are using a now outdated guide which uses the old Arduboy library. The Arduboy2 library has the flashlight mode built into it so it can help to try and recover it, so that won’t work in this situation.

The reset button method should always work, but it won’t matter if you aren’t getting any usb connections.

Are you by any chance connecting through a USB hub? If you are sure about the cable, you should connect the cable directly into the PC.

What OS are you using? Are you on PC or Mac?

Let me know, if you try all this and still can’t figure it out then contact me via arduboy.com/contact and I can help you directly from there.

Unfortunately, as you may notice you are using a now outdated guide which uses the old Arduboy library. The Arduboy2 library has the flashlight mode built into it so it can help to try and recover it, so that won’t work in this situation.

Just to be clear, the original Arduboy library also has flashlight mode included in its begin() function (although it doesn’t protect against the very rare case of an interrupt clobbering the bootloader magic key.)

Thanks to everyone taking the time to answer.

Update - I was wrong about the screen changing when I hit Upload. Nothing happens. I must have imagined that.

I have tried 5 different cables - but only 1 of those are for sure supposed to allow data - the others are likely only for charging. Unfortunately, I do not have any other devices that use a micro usb, so I cannot test the cables on any other device.

I am not using a USB hub, either. I’m plugging it straight into my PC.

Also, I do know that the game-making guide is out of date. However, it was not out of date back when I used it.

i would suggest trying to use Arduman FX to help you flash something else on it.

I’ve got the initial parts setup for the ArduManFX utility I’ve been working on. https://github.com/tuxinator2009/ArduManFX For those who aren’t aware, this utility is a GUI tool based on the python scripts created by @Mr.Blinky for managing flash cart images for use with the RAM expansion. This tool is still in a very early alpha stage right now but it is able to download a cached copy of @eried’s “unofficial” Arduboy repo and allows you to upload any of the games to your Arduboy. Later it w…

And make sure you use a data cable.

@swatagnat Probably a good idea to get a hold of me at the contact form arduboy.com/contact and I can help you from there

Okay. So…turns out it was the cable all along. Derp.

After trying my 5 cables, I felt certain that it couldn’t possibly be a cable issue. However, I asked a friend if he had a cable I could borrow to try at least one more time - and sure enough, it worked.

I greatly appreciate those of you that took the time to respond.

While I certainly feel silly, this issue led me to discover some new things about how these things work, so it wasn’t all for naught. Thanks again.

Unfortunately a lot of USB cables these days are made without the data lines because USB been misapropriated as a means to charge devices without providing any kind of data transfer, which has lead to a lot of ‘charge only’ cables being produced (because they’re cheaper). In other words, it’s not your fault, it’s the market’s fault.

(I think that technically by not providing data lines these cables don’t actually meet the proper USB standards, but don’t quote me on that, I can’t verify that claim at the moment.)

I’m going to leave this link here in case it’s useful for people with similar issues in the future: 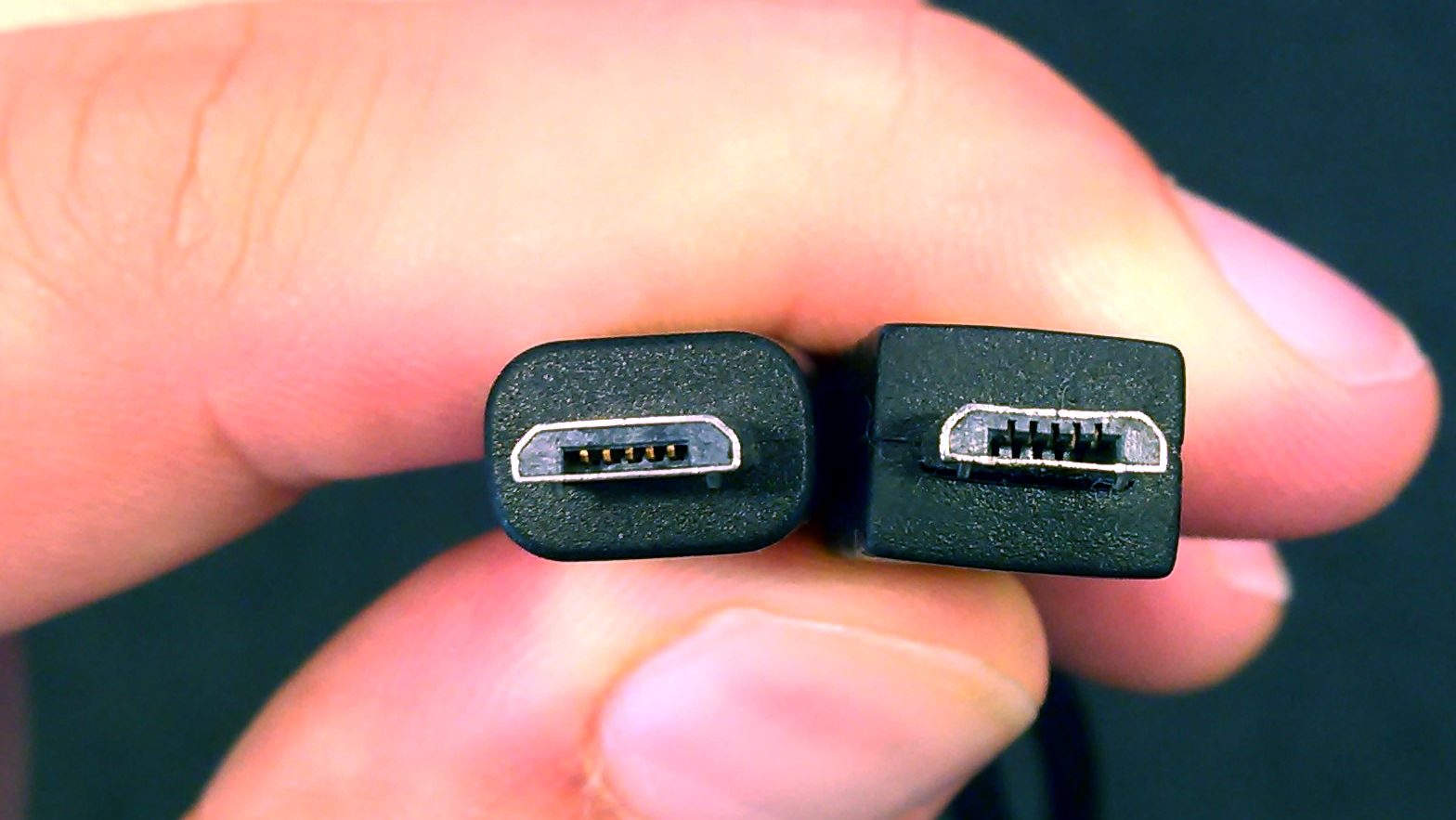 Not all USB cables are able to transfer data. Learn more about USB cables and how to tell USB data cables from USB charging cables.