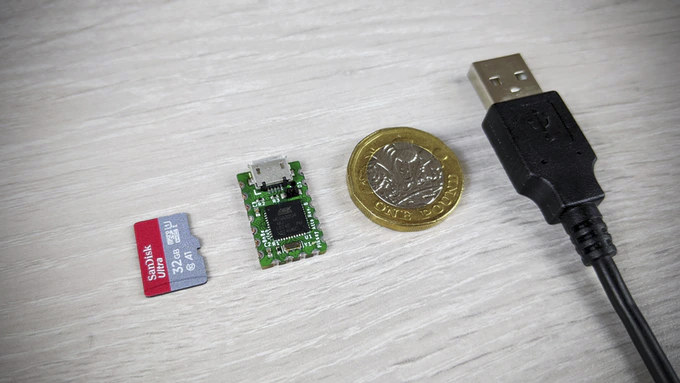 Piksey Atto is a Tiny Arduino Compatible Board with Castellated Holes...

Piksey Atto is a MicroSD card-sized board based on Microchip ATMega2560 MCU found in Arduino Leonardo board and exposing I/Os via castellated holes.

Might not have enough I/O pins to support 6 buttons plus screen SPI though.

I saw it earlier this week and pledged for two. May not have as much GPIO pins but I still see room for a display, flashchip, 6 buttons, single sound channel and a neopixel (not the reason why I get a few of these though)

Counting the GPIOs I think you got enough for 2 channels audio.
The analog pins are all digital GPIOs too (dunno why their pinout doesn’t show it).

Even more if the buttons are done with a 2x3 matrix + diodes rather than 6 direct wires.
or 9 Buttons even.

Am I forgetting something?

Am I forgetting something?

When multiplexing is gonna be used. The chip select lines and D/C lines can also be used to select button rows.

I feel a AttoBoy design coming up

I’m not fond of the many-resistor-buttons-to-1-analog-pin trick but that would free up some pins too.
(They’re a horrible idea in a car’s steering wheel button cluster with flex membrane buttons.)

Lets reserve SDA and SCL then so some cool I2C device(s) can be added.

Yeah I’m not fond of that either. I like digital buttons so they’re able to generate interrupts if desired (for wake up from powerdown for example)

@pharap did you see this pic! It uses a pound coin as reference - not some US currency.

I don’t really like any currency being used though,
regardless of whether it’s the one I use or not.
Think of all the countries where people don’t have a clue how big a poind coin is.

Having a micro SD and USB cable for scale is better,
though I still say a ruler is the one true solution.

They do actually list the dimensions in millimeters though,
which is what they should be doing,
and what other companies sometimes forget or don’t bother to do.

(Unrelated: I still can’t quite get used to the 2-toned (or more accurately ‘bimetallic’) pound coins,
I keep mistaking them for 2 pound coins. Though I do like the rose-leek-thistle-shamrock design.)