Hi uXe, any chance you could PM me? I’ve been experimenting with a DE0 nano using the Quartus ii software, I’m using their mega functions to create a PLL clock for the 25 MHz pixel clock input.

I am using this to output video from the DMG and have it mostly working, there are just some weird issues that I’m not really sure how to troubleshoot.

Would be awesome if you could help me with this.

I really like Chris’ user id ! @0xcf … unfortunately my name doesn’t allow that

@filmote its probably the only cool thing about my name, at least when you talk to someone you can always use the line "Simon says… "

… which is better than them getting in first with ‘simple simon’.

…have been monkeying around some more with the VGA1306, and managed to crank it up to 15-colour RGBI and get it hooked up to an Arduino Due simulating an Altair 8800, which then outputs data to the VGA1306 simulating the Cromemco Dazzler’s multicolour 64x64 pixel mode - here it is displaying Li-Chen Wang’s original Kaleidoscope demo (check out all 127 bytes of .asm source here)

That is pretty darn awesome.

check out all 127 bytes of .asm source here

That is pretty darn awesome.

Yep … that is impressive.

Sorry to res old threads but I’m catching up on the scene. Anyone have one or two of these they want to part with? They’re obviously super cool!
I tried messaging @uXe on ig but I’m sure they’re busy with other stuff.

I would like a couple as well. I would be glad to make them if we can get the schematic. I don’t think they are sold anywhere now.

Howdy - I’ve just uploaded the Eagle files and BOM to the GitHub repository as a ZIP file… SO GO NUTS!

If you do end up making a run of boards then count me in for one or two!

Fair warning - the schematic is kind of ugly, I was only really using it for connecting the necessary signals together and didn’t take the time to make it pretty.

This was for the ‘prototype’ batch of 10 autorouted boards - Matt at kitsch-bent then took these files and worked on a nicer manually routed PCB for the boards that were sold on his shop.

The part numbers in the BOM that start with ‘3’ are from Seeed’s “open parts library” (parts that they always carry in stock):

Anyhow, I would take a couple too if they aren’t too expensive.

I am located in minnesota usa.

I will take a look at the schematic and make a board file and figure out what sort of price we can expect.

I don’t think you’ll be able to manage PCB + assembly much cheaper than the USD$38 each kitsch_bent was selling them for unfortunately… I plugged the BOM and gerbers into Seeed, and they’re saying USD$23.82 each (for Qty 10) but this isn’t including some of the component costs that their system didn’t / couldn’t auto-populate the prices for… 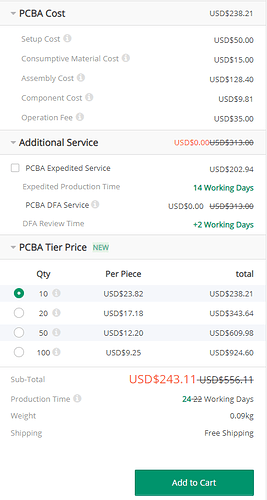 I did some layout and pricing. I think I can get the price down to $20 per board if I do the assembly my self. This would mean changing some of the components to larger sizes and the memory would be surface mount. Everything would be ordered from china except the memory and FPGA, so it would take a month or two to get to me after manufacturing. The one problem I found is no one has the memory chip in stock. not sure what could be substituted for it.

IS25LP128F-JBLE is a surface mount part I used with the same FPGA for this board.

Keep in mind you will need some way of programming / reprogramming the flash memory chip though - the reason I had it socketed here was so it can just be popped out and put into a programmer.

If you are doing a redesign, one nice feature I only considered after the fact would be to have a little bank of 3 dip switches so you could manually select the display colour by toggling the RGB pins on the VGA output… 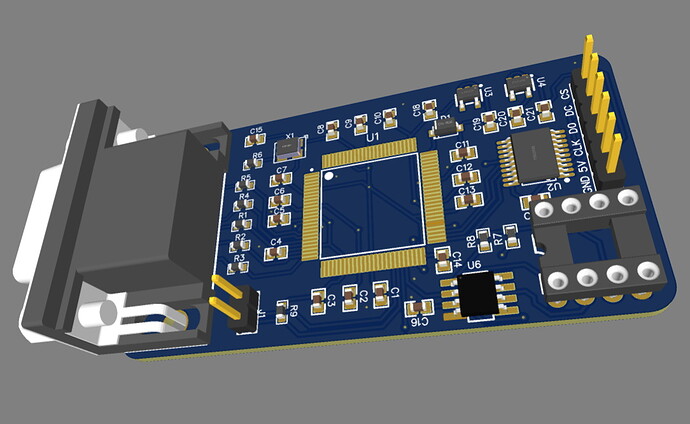 Here are some teaser pictures. I added a socket so a DIP chip can be used if you don’t want to use the surface mount memory. It would be one or the other, I don’t think both would work at the same time. I just tied the pins together. If anything I do is a bad idea let me know. I am still in the electronics learning phase.

For the dip switches, would it just be toggling the color channel on or off or would it function in a different way? 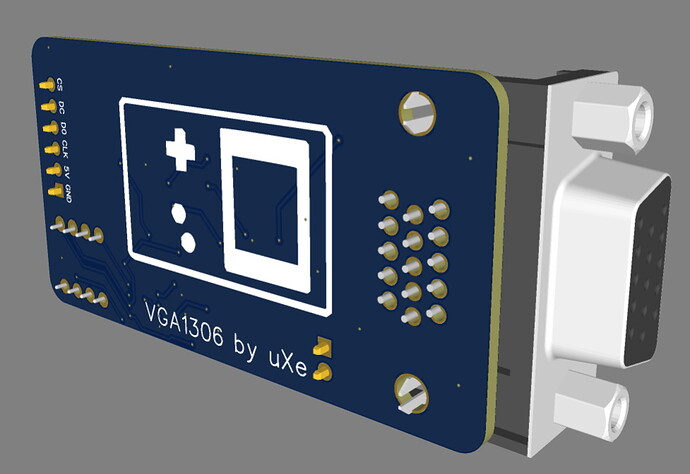 Here is the board bottom.

Good thing with at least having the through-holes for the socket on-board is that you could always solder in some header pins there and possibly program the surface-mount chip ‘in-place’.

PS. for the socket, I would opt for one with the square (‘leaf’) contacts, not the round (‘machined’) contacts: 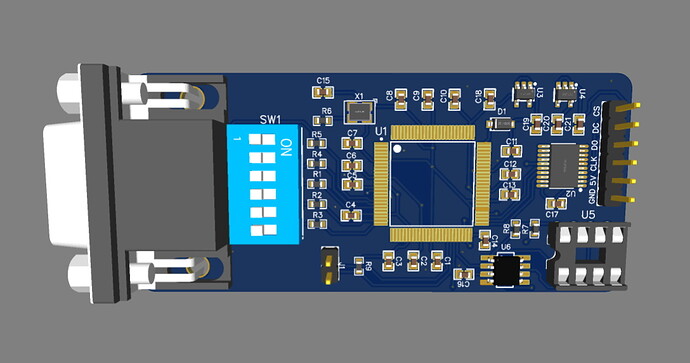 vga1306 31089×574 116 KB
I added the switch and changed the socket. I have a little room above and below the switch. Is there anything else we want to add. I was thinking some header pins to watch the vga signals?

I have a programmer for the memory chips, so flashing them isn’t a problem.

The current board dimensions are 74mm long and 33mm wide.