Where to buy tetris microcard

i want one, no idea where to find em

Before you do, I received mine, and the board does not have a second, user-reprogrammable chip, as originally promised.

If I recall correctly, there was an announcement of some kind on the site about that. Because of legal reasons, they were not allowed to implement the option for another game onto the same system that Tetris was branded for or something like that. Very unfortunate considering some people had some games in development for the microcard.

Last update (Oct 26 2016) I’ve found, stated 2 chips. They had to lock the one, because of licensing, but provided a second chip for other software. Multiple Games / Side Loading

Kevin sent no email updates, regarding changes, to those of us that preordered the Microcard.

while i admit that IS disappointing i still want one, more so to support arduboy as im not a huge fan of tetris anyway

though id rather buy an arduboy of that style WITHOUT tetris

still your responces dont tell me WHERE to buy one

If I recall correctly, there was an announcement of some kind on the site about that.

That announcement may have been only on Slack, or possibly Twitter.

Because of legal reasons, they were not allowed to implement the option for another game onto the same system that Tetris was branded for or something like that.

still your responces dont tell me WHERE to buy one

Somewhere (maybe here or on Twitter), I’m pretty certain @bateske mentioned that there was a possibility the Tetris Microcard would be a limited run item. I.e. only pre-orders would be shipped and then it would be discontinued.

Tetris system! are they still releasing the unit? [Yes] Products

They are still on the way! Here is the first finished sample from the factory! [image] However… we had a significantly major hiccup at the factory last month when all of the printed circuit board assemblies failed quality inspection. All of the components are ready and waiting to be assembled in the factory but we have to reproduce all the circuit boards, so it looks like we will likely miss getting these delivered before Christmas. If successful, we are offsetting the cost of this producti…

I asked Kevin and support team for the reasons the second chip had been removed, and I got this answer by e-mail:

Yes it is true, we had developed and built the hardware to have 2 chips,
one that would have Tetris® on it and another chip that would be
reprogrammable like the standard Arduboy. The boards were produced but
in quality testing we founds it is possible the chips were interfering
with each other. We were unable to diagnose the problem after several
revisions and the eventual solutions that we would have had to use were
way outside the scope of the origonal device.

So we went back to the drawing board and focused on what was simple and
what was working.

We tried and in the end, we are very happy with the result. We can take
what we learned in the process so we can one day deliver on a device
that has more than one game at a time!

I agree with @MLXXXp that the Tetris Microcards currently shipped will be a collector, no chance the orders will re-open soon.
And re-reading Kevin’s post from November, I can’t help but feel they knew they couldn’t deliver the promised 2-chip Microcard. Or maybe there are legal implications involved… (or maybe I’m paranoid!)
All in all it’s a shame they were not more transparent about it.

I would just like to buy one. I like the dedicated aspect of it and the form factor is cool as hell. So basically SHUT UP AND TELL ME HOW TO MAKE YOU TAKE MY MONEY!!

@Hanoverfist
here here but as was said above it was only a limmited run and if you and me want one, we have to talk to people who are unhappy with the one they got and buy it from them

@crait thanks for your reply

We are really sorry that the one post we made during the production about 2 chips really got so much traction. It is something we tried but really never promised because it wasn’t on the sale page.

But we want to make sure everyone is happy, please reach out to us directly using the contact form and we can help to get the issue resolved.

The MicroCard was produced by Seeed Studio and we are trying to help them carry it in the future.

@bateske you did what you could, and i would still happily buy one,
that being said i think the microcard would sell alot better WITHOUT tetris OR with the second chip at a higher price.

Hello, the Tetris Microcard is available from Seeed Studio! 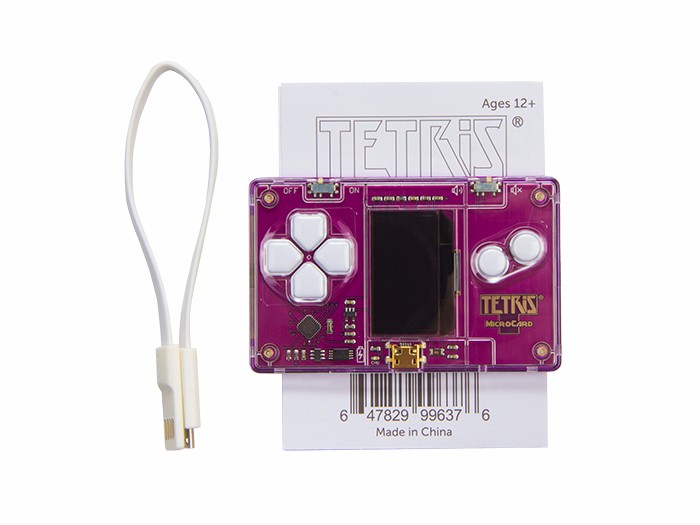 The Tetris® MicroCard is the ultimate on-the-go gaming hardware for those moments where you want to take a quick Tetris break! The Tetris MicroCard is powered by Arduboy, the game system the size of a credit card.

We just found some extra ones laying around in storage, they are shipping from singapore but these are the very last microcards we made!