@mockfrog uses a proprietary repo. Using a repo link from another website most likely won’t work. If you open up the .JSON file, you’ll see the required fields for our programs. Do you know if you’re using repo’s that are in the same format?

Wait, Arduboy Mate’s default repo (http://mockfrog.de/arduboy/repo.json) is proprietary? Because I fetched a copy of it and edited the values for my files.

The only difference between it and the one at www.crait.net seems to be the addition of a “website” entry for each item. Since the mockfrog one loads properly, I don’t believe it should be needed.

your json file misses a comma between description and model.

Cool. That indeed fixed it. Eventually. Getting the URL into the thing is a PITA, just because typing on a phone is a PITA…

Is there documentation on the meaning of the other fields? In particular, “model”? I’d like to start posting test builds as well, but…

Sorry for the long absence, but I finally updated the beta version of Arduboy Mate in the Google Play Store.

Nice, I’m gonna check this out.

Have you thought about support for the .arduboy file format that we’ve been cooking up?

Not yet. Probably because I can’t access that thread. Is it a private one?

@mockfrog I have your app installed on my phone, but not having much programming knowledge I don’t actually know how to use it. If you could make a guide that would be greatly appreciated.

@HZ128 Have a look at this page: http://mockfrog.de/arduboy/arduboymate

@mockfrog As much as that helps, not knowing the programming language means I have no clue what a repository is or where to find the hex files.

A repository (also known as a repo) is basically a big list online of programs or games people have put together. This program connects to the internet, looks at that list, then downloads the game from the internet directly to your Arduboy.

You can then connect your Arduboy to your Android device using a USB port. If it doesn’t have a standard USB port, you need use a converter called an OTG cable.

Open the Arduboy Mate app and choose a repository. 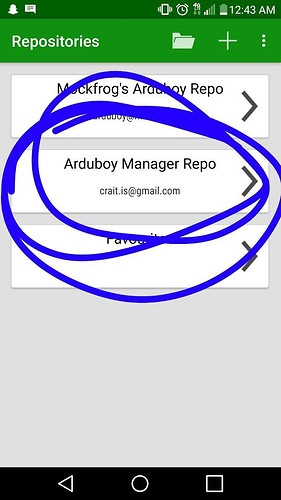 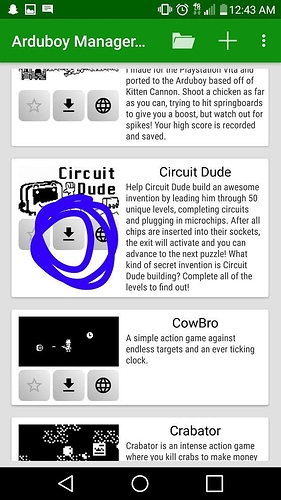 Your Android device will find and install the Arduboy automatically!

I hope this helps!

@crait Thanks. How do you fidn or create a repository though?

Hmm… I think the only repositories that exist are @mockfrog’s and mine. There’s no list of them anywhere, I don’t think…

To make your own, you’re going to have to do a few things…

This would be very inconvenient to most people, especially those who are unfamiliar with programming and stuff. As long as we’re maintaining our repositories, there’s not really a big reason to want to make your own repo.

@crait How do you add your repository to the app, or even add individual games to one of thr repositories already on there?

Adding a repo requires having a web site that will let you fetch a raw file. Most of the free hosting services (google drive, google docs, dropbox, etc.) won’t do that, and actively change to break things if someone figures out how to do it.

Given that, your repo is a json file describing the games in the repo. You’ll also need to put the hex files for each game on the web. Those addresses - as well as descriptions - go into that json file. I’m not going to describe that or try and teach you json - it’s fairly straightforward, and there are lots of tutorials on the web. To get the format for a repo file, fetch one to look at. You can either use the URL I posted above, or the URL that shows up when you tap the “+” in the menu on arduboy mate. Edit that file to have your information in it. Last time I played with it, arduboy mate didn’t have very good error messages, just saying “It didn’t work” if the URL was wrong or the file failed to parse for some reason.

Once you’ve got the URLs for your hex files in the json file, and that json file all on the web, add the URL for the json file to arduboy mate. Tap the “+” in the menu bar again, and type (or paste) the URL into the text entry area and hit ok. If you did everything right, the text you used for “Repository” in the json file will show up in the list of repositories, and you can tap on it to download games from it. If you screwed something up, you get a short blurb saying “Failed to load repository” and a blank repository entry. Long press on it to delete it and try again.

@crait Thanks for helping me out there with yout screenshots
I uploaded another update to the beta channel. I hope the handling is getting a little better with this update.

Please tell me, if you have any suggestions or find a bug.

How do you add your repository to the app, or even add individual games to one of thr repositories already on there?

If you make your own game or know of one you want on the repository, the only ones that can add it are the owners of the repositories! Let me know and I’ll see what I can do to add it to the list.

@crait Cheers. The main games I’d like adding are the Team ARG ones, but Squario and Hollow Seeker would be nice as well and personally I prefer Arduman to the Pacman clone in Arduboy Manager.

I’m trying as hard as I can to get as many games as possible into the Arduboy Manager repo! Closer to the begging of the new year, some of the other developers and I will have a few announcements to make that will include changes to how some development gets done. This will surely make adding games to the repo easier, which will mean more games to choose from for people like you!