WIP title screen, to give an indication of the game’s vibe.

Still needs a lot of work, will share the process here.

Time for a little ‘paper prototype test’ if you have paint, ur welcome to draw ur path on this level image below:

How would you grab all diamonds as fast as possible?
(Spikes and slimes kill you. Slimes move horizontally. When slimes touch a diamond it breaks.) 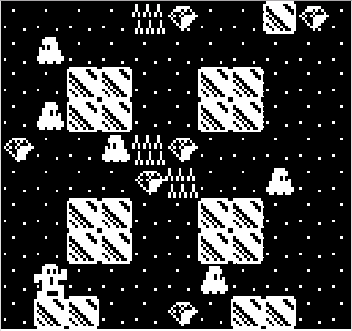 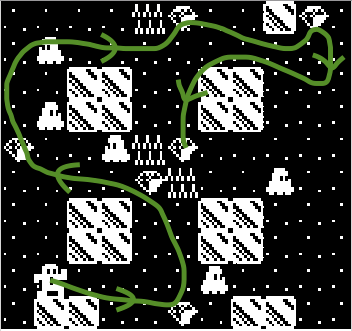 @crait Thanks for the feedback. I still doubting if slimes will have fixed horizontal only paths, or if they will move around freely. But this type of details I can only answer with playtesting. Waiting for a Arduboy to arrive to tweak gameplay. But still enough to do before that stage.

Btw anyone here living in Amsterdam with an arduboy that we could borrow for coding/testing? 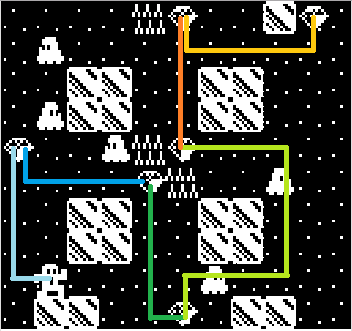 My solution. I don’t know if it’s the quickest, but it’s probably one of the safer options since it minimises potential slime contact.
Note that the cyan path has to be the player’s first path because it’s the only gem in risk of being destroyed by a slime.
Also I’m making assumptions that the slime at the bottom moves out of the way enough for that to be a viable path, otherwise the player would have to backtrack up to the top left.

Thank you for the feedback!

I’ve chosen to make the game with 12x12 sprites to have more of the level in your screen. But this also forces me to use a boarder less white on black background sprite style.
I’m considering doing the next game in a 16x16 sprite size, with a line boarder sprite style with white as a fill/background color.
Bit hard choice but will stick with this for now I think.

12x12 Tiles means you’ll have left and right padding of 4 pixels and top and bottom padding of 2 pixels.
(Just in case anyone else is too lazy to work that out.)

@Pharap why would there be left and right padding? I understand the vertical padding of 4 total pixels (wherever you put them) because the bits are stored vertically in the buffer. But each tile could just be 12x16 pixel images?

128 does not divide evenly by 12, so as @Tomin kindly pointed out, there would be 4 pixels left over each side. Whether that’s padding or whether the world overflows the screen is a different matter, but the uneven division still stands.

Also, rectangular tiles would be very irregular (if you’ll excuse the awful pun).

Oh I meant the tiles would be 12x16 but only drawing 12x12 since images need to be multiples of 8 vertically.

Rectangular tiles would be irregular haha. Could be interesting though.

Because initially I wanted to create a game that would fit in 1 screen, I choose 12x12. Now the idea is to make levels that are 2 screensizes tall. So it will have some boarders on the left and right of the screen.

Animation of the player character. Quite head breaking to fit in 12x12 pixels

update
And the enemy animation

Animation of the player character. Quite head breaking to fit in 12x12 pixels

Worked on some more animations. And did some more brainstorming on the gameplay, as a result we came up with the power up coin, which will give you a limited special ability, needed in the harder levels!

I decided to re-do the art. Going for 16x16 sprites with white backgrounds.

This means the levels will no longer fit in a 2 screen layout, but the camera will follow the character around.

Waiting longer then expected for the hardware to arrive. So we can’t start coding yet.

If anyone in Amsterdam could borrow their device for a long weekend, that would be great help.

If you know JavaScript, you can write the code using the Arduboy JavaScript simulator that @mrboggieman made. That’s what I did for a few games when I didn’t have a unit.

You can also use Proton Arduboy Simulator as well, it allows you to write C and C++ code and run it on Windows (for quick testing and debugging without needing an Arduboy) as well as Arduboy without changing any of the code. It works well on Visual Studio 2005, 2008, and 2015 Community Edition, according to the thread.