I grabbed a hot soldering iron with my palm to bring you this. https://t.co/yed6jFkzyH 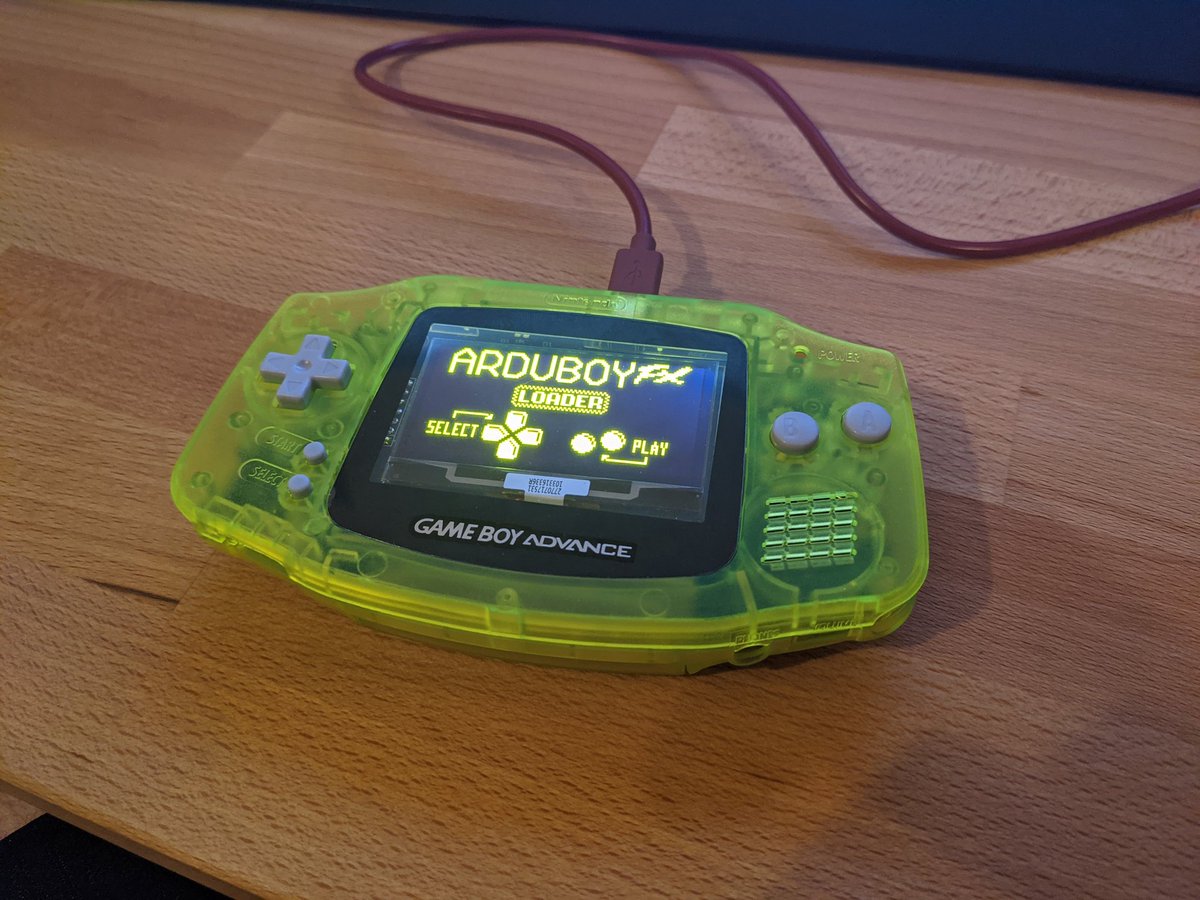 It’s got USB-C (brought down to normal USB)

Haven’t completed the circuits or done testing yet cuz I’m waiting on parts to arrive but it will also have:

Audio amplifier w/ speaker. Headphone jack. (You can do software serial over the headphone jack)

the RGB led is in the spot of the power button.

Power switch that should work with the stock GBA case.

It will run off AA batteries.

Once I get all that working I’ll sell the PCB

Then work on REV2 which will switch to using an M.2 slot like sparkfun released, and design an Arduboy FX module in this format. So you can put your own microcontroller in it. That will be cool because they have an esp32 one which is something I’ve always wanted to mess around with more.

Then after that REV3 if I can figure it out will switch the display to some DPI panel (if i can find a good one that fits) and headers for the RPI compute 4.

I need this in my Game Boy clone collection!

Could you please provide some pictures of the internals?

Secret for now until I unlock them!

@bateske Any update on this?

Need to work on the audio amplifier circuit. I tried to put 220uF capacitors in an 0805 package and also wired the potentiometer backwards.

Also the L and R buttons need longer plungers on them, so gotta spec that out.

Just got some battery tabs in today so I’ll be testing those out.

Also need to order in a inductor so that I can test the voltage booster for the two AA and the power switching circuit to decouple when the USB is connected.

The OLED also needs to be moved over like a millimeter.

Also trying to consider using the USB-C cable as a link cable with the extra available conductors. In order to do so have to be able to swap the RX/TX lines into crossover so we can utilize the hardware serial. Considering a soft latch that works by holding down a button during power on that is independent of the processor, it would be its on discreet circuit, that’s gonna take some work.

It’s been backbburnered to the FX production and also another hyper secret project that I’m working on.

In other news I guess I should post it over to the Arduboy Mini section, but Seeed Studio has launched a group buy platform where you can submit a PCBA to them, and they will run it kind of like a kickstarter and also do the fulfillment. This might work perfect for the Mini, so I’m exploring that once the FX is finished.

I’d like to get the mini out before the XL.

If you are an electrical engineer and would like to help speed this process, please inquire within.

I am not an electrical engineer unfortunately, I would be happy to help otherwise

Do you have a time frame in mind for when it will be ready?

This is firmly in “when it’s done” territory, but a SWAG would be well into the second half of the year.

The usb C connector fits perfectly although it pokes out of the case a couple mm since it’s “too long”.

I’m designing this that it requires no modifications to the case, and that’s the hard part. But so far so good.

If you are an electrical engineer and would like to help speed this process, please inquire within.

Electrical engineer here, I’ll shoot you a pm and I’ll see if I can be of help.

@bateske are you planning to share some dev kits at some point? I would like to experiment with it if possible

Planning to release a first revision, with AA batteries and audio amp.

@bateske link cable sounds a nice feature. I would be happy to write some software if it materializes

By reconfiguring the additional pins on the USB-C connector, it can be made so that RX and TX are crossed over when the USB-C cable is rotated 180deg for one of the connected devices.

This diagram shows an attempt at differential signaling, although it may not be necessary.

If putting 5v over the SBU lines is OK, then this example also shows that a “LINK CONNECTED” light could be used to indicate the correct orientation of the usb-c cable.

Basically, you’d have to guess at which way that is. You’d plug in two Arduboy XL, and if you didn’t get the link light, then one person would rotate the usb-c cable 180 degrees.

I think all USB-C to USB-C cables should have all of the conductors included.

Time to research the SBU functions. I know it’s used to detect polarity, but I think from a PC or otherwise it may be grounded, so it might not be wise to inject 5v. May have to do a little more circuitry there, it would still be possible to detect the ground and run an LED from it, but would have to add a transistor or something, maybe.

Any USB-C wizards out there?

I’m reinventing the wheel, someone stop me!

So, actually just sending serial data through these will work just fine!! The only thing to watch is that it’s supposed to be 3.3v so gotta do some voltage translation but that’s trivial.

Alright, first attempt at differential signaling. If anyone has some time to check my work here, this is to go over the USB-C cable.

The only thing to watch is that it’s supposed to be 3.3v so gotta do some voltage translation but that’s trivial.

Maybe use something that’s designed to run at 5V, like the DS90LV019.

If you could get away with RS-422 instead of LVDS signalling, you might consider something like the THVD1551 or THVD1451 for lower power draw.

If you have an I/O pin available to disable the chip you can get much lower power draw when disabled using a THVD1512 or THVD1552 or THVD1452 (though the package is larger).